Just like last year, this month finds my wife and me transplanted from Washington, D.C. to the sunny south.  February, despite those limited number of days, is clearly the longest month in the year when spent in North Eastern climes, a fact that Boston has recently seen underscored.

It always seemed to me that whoever made February the month with the fewest days was on to something.  Better still, it should have had 21 days – allow it three weeks and no more.  Then slip that extra week into June where it would be  appreciated instead of cursed.

Anyway, when Pat and I retired back in 2009 we vowed to never spend February in the District of Columbia.  That is why on this “Shrove Tuesday” (or “Fat Tuesday,” as it is more popularly referred to) we find ourselves ensconced in a rented condo unit on the beach in Gulf Shores, Alabama.

As in the past I try to keep my every-other-Tuesday from becoming a travelogue simply because I am away from home.  But I also try to find inspiration in locale, and that is particularly easy to do as I look out onto the Gulf and think one state (and one shore) to the left.  What first got me thinking about the Florida Atlantic shore this year was an article by Jonathon Yardley that appeared in the Washington Post back on January 13 reporting (joyously) that virtually the entire John D. MacDonald library is being re-issued this year.  This includes all 21 of MacDonald’s Travis McGee novels, each of which is being offered by Random House in brand new, handsome trade-paperback editions.

Two weeks ago in my article on Francis Nevin’s new Ellery Queen work The Art of Detection I quoted Mike Nevin’s observation that as a general matter “when the author dies, the work dies.”  In a similar vein, Jonathan Yardley’s article in the Washington Post noted that while


[t]he McGee novels have remained in print in mass-market editions . . .  most of the other books by this prodigiously proficient writer long ago vanished. . . .  To be sure, some characters in suspense fiction have long outlived their creators – think Lord Peter Wimsey, Sam Spade, Miss Marple and Philip Marlowe – but mostly they just fade away, a fate that surely seemed in store for Travis McGee.

What a shame that would have been.  Kurt Vonnegut once predicted that  “[t]o diggers a thousand years from now . . . the works of John D. MacDonald would be a treasure on the order of the tomb of Tutankhamen.”

And what has been the catalyst for this MacDonald (and McGee) revival, saving us (at least in the near term) from such excavation?  Well, according to Random House it is (counter-intuitively) the blooming e-book market.  The anticipated new appetite for e-book versions of the McDonald library is projected to be strong enough to propel new issues of e-books and paper versions as well.  So this rising tide appears to be enough to lift all boats.

And that happily  includes the Busted Flush.  For any of you unfamiliar with the series, the Busted Flush was Travis McGee’s 52 foot houseboat, on which he resided at Slip F-18 in the Bahia Mar Marina in Fort Lauderdale, Florida.  The ship’s name is derived from the poker hand that allowed McGee to win the Busted Flush from its previous unnamed owner.

And Travis McGee?  Well, McGee advertises himself as a “salvage consultant.”  He recovers otherwise hopelessly lost property for a fee of one-half the value.  As McGee explains it in The Deep Blue Good-by, the first volume in the series, “I like to work on pretty good sized [projects].  Expenses are heavy.  And then I can take another piece of my retirement.  Instead of retiring at sixty, I’m taking it in chunks as I go along.”  As McGee also explains, there is always a need for the services he offers.  We live, McGee notes, in “a complex culture . . . .  The more intricate our society gets, the more semi-legal ways there are to steal.”  His simple role is putting things back to right.

What made these novels such great reads?  Well, principally the taut writing and prolific imagination of John D. MacDonald.  The books follow a formula, but a pretty wild one.  All the reader really knows is that the hero, our friend Travis, will prevail and will still be around by the last page.  This is also true of his sidekick, Meyer, an economist who lives (first) on his neighboring ship the John Maynard Keynes and later on the successor vessel, the Thorstein Veblen.  But aside from those two compadres, all bets are off, and virtually every other character struts and frets the pages in danger of extinction.

The success of the series also rests on the likeable shoulders of the characters MacDonald created.  Some writers leave their central character to the imagination of the readers (Ellery Queen, for example, unraveled mysteries for decades virtually un-described; Bill Pronzini’s hero doesn’t even have a name.)  By contrast, we know a huge amount about Travis McGee, including what he looks like and how he thinks.. 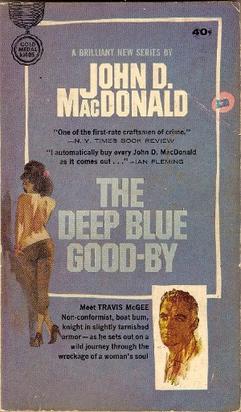 McGee, we are told, is a shambling brown beach bum with a 33-inch waist, who wears a size 46 long jacket, and a shirt with a 17½" neck and 34" arms.  He is likely to rail against anyone abusing the fragile ecosystem of his beloved Florida, and he wears his views on his shirt sleeve.  MacDonald, writing for the first-person narrator McGee, describes our hero’s views as follows in The Deep Blue Good-by:


I do not function too well on emotional motivations. I am wary of them. And I am wary of a lot of other things, such as plastic credit cards, payroll deductions, insurance programs, retirement benefits, savings accounts, Green Stamps, time clocks, newspapers, mortgages, sermons, miracle fabrics, deodorants, check lists, time payments, political parties, lending libraries, television, actresses, junior chambers of commerce, pageants, progress, and manifest destiny.

I am wary of the whole dreary deadening structured mess we have built into such a glittering top-heavy structure that there is nothing left to see but the glitter, and the brute routines of maintaining it.

I am also wary of all earnestness.

We get the picture.

The Travis McGee series spanned 21 volumes, beginning in 1964 with The Deep Blue Good-by and ending in 1985 with The Lonely Silver Rain.  Each volume sported its own color.

Rumors persisted for years that a final volume, usually titled A Black Border for McGee, had been completed and that the book would kill off McGee.  MacDonald himself alluded to the volume in several interviews, saying that it would be published following his own death.  Almost certainly no such volume was ever written, and McDonald stated in later years that he would never kill off McGee since this would create a brooding ending hanging over the heads of new readers discovering the series.  We do know, according to letters written by McDonald to Mickey Spillane and to Stephen King that at the time of MacDonald's death following heart surgery in 1986 he had completed four chapters of what was to have been the 22nd Travis McGee adventure.  MacDonald also said that the story would be in two parts, spanning twenty years, and that it would end with with McGee still very much alive but slipping the lines off the pier and moving the Busted Flush to new moorings.  The completed chapters alluded to by MacDonald have never been found.

Since MacDonald’s death in 1986 various offers to otherwise end the series, including one from Stephen King, have been rejected by MacDonald’s heirs.  Just last year MacDonald’s son Maynard explained this decision to leave the series at the 21 volumes written by MacDonald:


[T]he offers to extend my father's work have run from a tacky, blatant, commercial knock-off to a respectful, professional postscript to his work by a true friend [i.e., King]. And between those extremes there have been many well-crafted manuscripts that were done with warm regard and sincere admiration for my old man.

As these offers and manuscripts continued, and the enthusiasm from Random House snowballed, I was forced to finally define and face my own personal resistance to the idea of a sequel.

Given that I am not immune to the money, why refuse?

It is because I have never seen a really good imitation, be it art, literature, or music, that carries that poignant echo of the original artist- as a man. Even if the work itself is excellent, there is an inevitable flatness on that most intimate level, the level where the artist reveals himself.

To me, a work of art is a souvenir of the artist. It is a reflection of his inner and outer experience. It represents who he is and where he has got to at that moment of his life. In this sense, the creative process defies copying. I enjoy my father's work immensely. Part of him is still there, present on each page. Trying to echo that by imitating it is like trying to paint like Van Gogh by cutting off an ear. It also strikes me as a question of fairness. The dead cannot answer back and I feel it is presumptuous and disrespectful to play with their work.

As someone whose published mystery output consists solely of pastiches I have some perhaps understandable quibbles with Maynard’s view.  But hey, it’s not my decision.  So while we can expect no new McGees, we, in any event, will soon have new editions of all 21 existing McGee novels.  As for what might have eventually happened to McGee, we are left to our own musings and those of others, including Carl Hiaasen:


[P]ossibly the old houseboat is tied there still; McGee on deck, tending to fresh bruises, sipping his Boodles; watching the sun slide from the sky over Las Olas Boulevard.  Anyway, that's what I want to believe. If he's gone, I prefer not to know.

Welcome back, McGee!
Posted by Dale Andrews at 00:01