The times, they are a-changin


Things aren't the way they used to be.  And they never were.

What better day to contemplate change than New Years, the day when many of us re-resolve and the world goes through its latest re-boot.  I tend to get a bit contemplative at this time of year, and it is not simply out of concern lest auld acquaintance be forgot and never brought to mind.  It is also a recognition of how the world around us, with speedy abandon, sheds that which had been commonplace while rushing to embrace things that previously were the unimaginable.  Try to find a television set for sale today that is not a flat screen, go shopping in search of a package of VHS tapes, or an album on a cassette tape.  Remember when LP records disappeared from the stores?  It happened almost overnight.  And now the same thing may be happening with CDs and the whole concept of album music as musical appetites turn to downloads and individually created playlists.

While ruminating over all of this I recalled (dimly) a science fiction story that I read when I was an adolescent – so that would be about 50 years ago, probably in 1962.  The story was set in a future so remote that computers did all calculations and, as a result, the ability to solve simple math problems in one’s head became a lost art.  Well, apropos of the theme of all of this, all I had to do today to find that story, The Feeling of Power, written by Isaac Asimov and first published in 1957, was to run a simple Google search -- “science fiction doing math in your head.”  In Asimov’s story (readily available, of course, on line) one man manages to re-invent the ability to work out multiplication problems in his head.  At first there is disbelief among his contemporaries, but this eventually gives way to sheer awe.


Nine times seven, thought Shuman with deep satisfaction, is sixty-three, and I don't need a computer to tell me so. The computer is in my own head.
And it was amazing the feeling of power that gave him.

Asimov’s story is not as far-fetched as it at first seems.  A recent issue of Harvard Magazine comments on studies conducted by Dr. Daniel Wegner, Professor of Psychology at Harvard, that bear witness to Asimov’s conjectures of over 50 years ago.  What Wegner’s studies suggest is that search engines such as Google and Bing make obscure knowledge so readily available that we are remembering fewer and fewer facts on our own.  The reason for this is simple:  Like the contemporaries of Shuman in Asimov’s story there is, as a practical matter, no reason to clutter our minds with such things.  It is true that to write this article I had to remember that there was a relevant story written 50 years ago (and maybe, in that respect, I get closer to Shuman).  But finding the story, and then jumping to Dr. Wegner’s study, can all be done with a laptop and a good wifi connection, all in the comfort of my living room.

Similarly, as Wegner’s study suggests, we tend no longer to memorize telephone numbers because they are stored on cell phones.  We are less likely to remember how to drive to a given address because we more and more depend on GPS to take care of that for us.  Such matters were previously either committed to our own memories or to the memories of others who we knew we could rely on for the phone number or the directions.  These latter situations, where we keep track of those who are, in turn, keeping track of factoids we may need, Wegner refers to as “transactive memory.”  The Harvard article explains this as follows:


[T]ransactive memory exists in many forms, as when a husband relies on his wife to remember a relative’s birthday. “[It is] this whole network of memory where you don’t have to remember everything in the world yourself,” he says. “You just have to remember who knows it.” Now computers and technology as well are becoming [the] virtual extensions of our memory.

And what we lose (can you hear Asimov chuckling in the background?) is the ability to accomplish these same tasks without depending on others, and now, on the computer.

If you keep your eyes open you will see other examples of this same phenomenon.  One of the most apparent, it seems to me, results from the evolution of the cell phone.  With the advent of Apple and Android “smart phones” the telephone, a device previously used for spoken communication, has evolved into one predominantly used for internet access and message texting.  A recent New York Times story reports that the CTIA wireless industry association has found that the average number of voice minutes used per consumer in the U.S. has dropped, while the number of text messages sent per user has grown almost 50%. The report also notes  that data usage (e-mail, Internet browsing, streaming video, etc.) has also surpassed the amount of phone calls on a mobile phone made last year.  We purchased a new car last year, and among its bells and whistles is the ability to read incoming text messages to you as you drive.  And my Droid smart phone allows me to compose text messages by talking them into my phone.  So.  I talk to the phone, my voice becomes a text message, and the reply is spoken back to me by my car.  How would the Asimov story end?  Doubtless with someone coming up with the idea of actually speaking directly to someone using a phone. 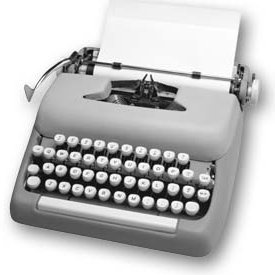 Another example:  An attorney who worked in the same office as me before I retired had an eight year old daughter who, according to the attorney, came home from school one day absolutely bubbling with news.  It turned out, she explained, that someone had brought the most amazing machine in for show and tell.  It was called a typewriter and, the girl explained eyes wide with incredulity, when you typed something onto it it printed the words out immediately, right there on the machine, without a printer or anything.  Yet another Asimov moment.

Not all things left behind by the passage of time are completely lost.  It has been theorized, particularly in the arts, that each evolving mode of expression frees the previous mode from the need to speak to the public at large, thereby allowing it to be utilized more freely for artistic expression.  Thus, the theory goes, movies freed the theatre to become more of an art form, and color movies did the same thing for black and white films, allowing them to become a media of the artist.  And CDs did it for LPs, which are now in the midst of a mild artistic resurgence.  One wonders if there will be a similar effect on hard cover books once the revolution to e-books, seemingly well underway, claims the major market share toe hold.

And then there are some things that float into the past not because they are outmoded, but for other reasons.  Fifty years ago, about the time I was reading that Asimov story, my grandfather used to talk to me about the days of his youth, when people traveled by horse drawn carriage.  I don’t as yet have grandchildren, though I am just about the age my grandfather was 50 years ago, in 1962.  What would I tell my grandchildren?  Why, you won’t believe this, kids, but back when I was young we walked on the moon.

Good night Dr. Asimov, wherever you are.