We had some Dutch friends visiting this summer. Thinking about , where we had a wonderful time visiting them in 2003, always makes me think about Anne Frank. 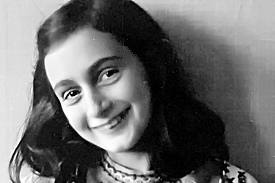 Is there anybody who doesn’t know who Anne Frank was? A young German Jewish girl living in Amsterdam during World War II whose family was forced into hiding for two years before they were betrayed to the Nazis, Anne became a heroine and an archetypal figure when her diary was found and published after the war.  If she had been Catholic instead of Jewish, she might have been considered a saint. But what I think inspires us about Anne and endears her to us more than sixty-five years after her death in a concentration camp at the age of 15 is not her suffering but the survival of the unquenchable spirit her diary revealed. 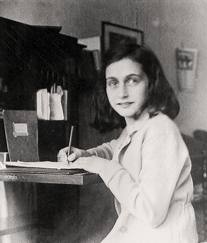 I read The Diary of a Young Girl at the age of 11, not long after it was first published in English. I consider it one of the books that made me a writer. I started a diary of my own modeled on hers, learning from Anne to examine and reveal my emotions and to observe and record the nuances of relationships—my own and those around me—to the best of my ability.  Like Anne, I was a Jewish girl living a secular life in the diverse society of a big, modern city. It would have been unimaginably shocking to me, as it was to her, to find myself singled out, forbidden such everyday privileges as going to a public swimming pool, shunned by friends and neighbors, and finally in danger of my life. Her unfolding sexuality with all its ambiguity made me more aware of my own. Her quarrels with her older sister didn’t seem so different from mine. Yet Anne had to paint her emotional life from such a limited palette, within the confines of such a small frame, and with an underlayer of constant fear.

I’d like to say that at 11 or 12, reading about Anne made me realize how lucky I was, but if I had that much depth in early adolescence, I certainly don’t remember it. I do know that Anne seemed very real to me. I was a constant reader at that age, and the people I found in books, especially other girls, did feel real to me: Anne of Green Gables, Emily of New Moon, Jo March and her sisters and all of Louisa May Alcott’s other girls. The shocker was that Anne Frank was not a work of fiction. She really did live and die.

The house in Amsterdam where Anne and her family hid is one of the most visited tourist attractions in Amsterdam. I made my own reluctant pilgrimage to the Anne Frank House during our Dutch visit. As an American Jew who was too young to have experienced the full horror of the Holocaust, I didn’t know how I’d feel. My parents had both been in for almost forty years by the time of World War II but certainly knew people who were lost. They tried to instill in me a sense of how fragile and terrifying being Jewish could be. But it’s hard to pass fear and horror on from one generation to the next, especially when a child experiences so many other cultural influences. I have always avoided the most graphic depictions of the Holocaust. On the one hand, I was afraid I’d find Anne’s Secret Annex too upsetting. And on the other, I feared I might not feel enough.

I needn’t have worried about feeling nothing. Tears streamed down my face for the whole hour or so we were there. The Secret Annex was bigger than I expected: I had pictured a tiny space like a 17th century priest hole. In fact, it was more like a New York apartment—except that two families shared it and they could never go out or even be seen at the windows. The horror was not in the confinement, but in how vividly being there brought Anne’s reality home to me—not real like a beloved character in fiction, but real like me.

Dramatizations of Anne’s story tend to end on the high note epitomized by the best known line from her diary: “I still believe, in spite of everything, that people are truly good at heart.” We would like to believe that Anne was able to hold onto that belief in the nightmare of Bergen-Belsen. But what has haunted me most since my visit to Amsterdam is a glimpse of the terrible reality through a recording in the voice of a non-Jewish friend of Anne’s (in Dutch, with a projected translation into English). She recounts how she made her way to the camp and talked to Anne through the wall, though they couldn’t see each other. Anne was starving. The friend threw a loaf of bread over the wall to her. But a woman snatched the bread and ran away. The friend tells us she could hear Anne crying.

That’s what really happened to this lovely teenage girl, and it’s hard to find a perspective on it that offers any comfort. Anne died of typhus a month before the liberation of the Nazi death camps. But more than 30 million copies of her diary have been sold, and almost a million visitors a year make a pilgrimage to the Secret Annex to bear witness to her story.