Ah, the High Plains.  Where the living is easy, there's more freedom, less government intrusion, and you can do any damn thing you want to do.  Sorry, but there’s no such place.  Sure, you get enough  acres, you can do just about any thing you want out in the middle of it.  But you’re still going to have to behave yourself once you come out of there:  for one thing, there are such things as OTHER PEOPLE.  Even in South Dakota.  We don't have a huge population up here, but that only increases everyone's dependence on everyone else, no matter what they think of that concept.  And, as always, it helps if you treat people decently, and don't quarrel with them, or else you could end up like a man I will call Gus Olson.  (All names, and some details, have been changed to protect both the innocent and the guilty.) 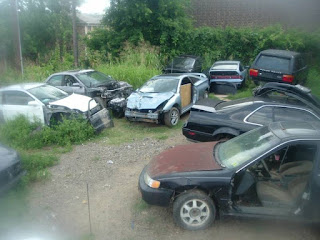 Gus lived in an old house on a corner lot in a town much smaller than Madison.  The trouble all started with his old cars.  First he had two, then he had five, then he six, then he had eight, next thing you know a dozen, and they were all junkers, piled up on top of each other and rusting away.  Well, there were complaints, and the city council gave him warnings, all of which he ignored.  Except for some choice language.  He quit repairing or painting his house.  Trash started piling up.  So did the citations.  Eventually he put up a ten foot high board fence running all the way around his property, which cost him a lot more than moving the cars and hauling away the garbage would have.

Now Gus had decided he was being persecuted back when people complained about the junkers.  So he started warning people to stay the hell off of his property.  Nobody took him real seriously until he started standing on his front steps with a shotgun.  Didn't shoot, didn't threaten, just stood there.  Technically, it was legal, but it was sure unfriendly.  Basically, Gus made it plain that nobody – NOBODY – was to set foot on his property.  He met the postman down at the sidewalk, and he stood right next to the meter reader as she read his dials.  A couple of people tried to talk to him, but he chased them all off.  He put up signs all along his property:

"ABSOLUTELY NO TRESPASSING!
THIS MEANS YOU!"
He quit talking to just about everybody in town, except to snarl at them.  He showed up at city council meetings and school board meetings and county commission meetings to rant about how persecuted he was, and how he’d have anybody’s hide that touched one thing on his property.  That a man’s home was his castle, and the rights of private property were absolute.  There was no doubt he meant every word of it.  And legally - we have "castle doctrine" big time in SD - he was absolutely right.

So, when Gus’ garage caught fire one night, the fire department – did I mention that up here small town fire departments are all volunteer? – showed up and did nothing but wet down the tall fence, and even doing that, they felt they were risking their lives.  After all, Gus had personally threatened to shoot each and every one of them if they ever set foot on his property.  So they stood there and watched as Gus’ garage burned to the ground, and half his house went with it.

For some reason, he was pissed off about that.  He wrote a letter to the editor of the local newspaper saying, and I quote, "I don't understand how they could stand there and do nothing.  I know I said I'd shoot them all, but still, they should have tried to put out the fire."

So, what do you think the fire department should have done?   As for Gus, he's still around, but he's not nearly as mouthy as he used to be.