Now That Is Funny


by Louis A. Willis
During the first week and half of July, the temperature here in Knoxville ranged from 95 to 100 degrees. My air condition system quit at the beginning of the heat wave, and the temperature in my house climbed to over 90 degrees. All I could do was sit in front of my 20 inch fan, watch TV, and think about a subject for my post this month. I decided to comb my local and online newspapers for funny stories about the bizarre behavior of us humans.

A guy here in Knoxville did chores in his house and yard buck naked until he was arrested for indecent exposure. He has lived in the neighborhood for over 10 years and during that time has embarrassed his neighbors as he traipsed about his property in the nude. He rode his lawn mower naked while mowing his lawn. Although the neighbors called the sheriff’s office many times, the deputies weren’t able to catch him until a neighbor recently saw him using a chain saw to cut up the branches of a toppled tree while naked and immediately called the sheriff’s office. A deputy arrived just as the guy ran into the house and caught him before he could put on his clothes. Being arrested probably won’t stop him from practicing his constitutional right to go naked on his property.

You all probably read this story in the NY Times. A woman in Georgia visited several cities and set up a pseudo doctor’s office in hotel rooms. Her customers were people wanting big rear ends. She would inject their buttocks with commercial silicone and use glue and cotton balls to prevent leakage. I wonder whose intelligence is the more questionable: the pseudo-doctor who thought she could get away with practicing medicine without a license, or her customers who were stupid enough to go to her for buttock enlargement?

Hooray For The Bear
With nothing else to do, and sitting in the cool of my new air condition system on July 14 about 9 in the evening, I watched a reality show for the first and probably last time. The show was called “Stupid Daredevil Stunts.” The scene that caught my attention involved a big black bear and a bear trainer. The bear was in an enclosure in a nature reserve, and when the trainer entered the enclosure, that bear stood up on its hind legs as if to challenge him. The trainer picked up a stick and started hitting it on the head and nose. Well, sir, that bear knocked him down and started smelling and pawing him. Outside the enclosure, the trainer’s helper tried to call the bear away: “here chubby, here chubby.” 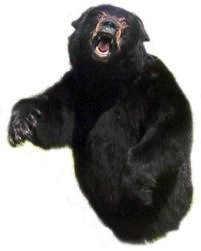 That bear ignored him, probably because his name wasn’t “chubby.” Anyway, the trainer played dead and after a little more smelling and pawing, that bear walked away. I imagine the bear was thinking: “if I kill this fool, that other fool will call those idiots with guns, and they’ll come and kill me. They ain’t gonna listen to my self defense argument that I was just standing my ground. I just better get the hell away from here.”

Update
As you all know, I’ve been keeping up with the case of the three men who were tried, convicted, and sentenced for the carjacking, torture, and killing of a young couple. The original trial judge, Judge P, admitted using pain pills and engaging in other criminal activities during the trials of the three men. He was replaced by Judge G, who ordered new trials without holding hearings on whether Judge P’s behavior caused any errors in the cases. The DA is appealing Judge G’s granting of new trials. Recently one of the defendants decided to take matters into his own hands. He filed a motion invoking his constitutional right to a speedy trial.

Like a lot of folks, I don’t think any one of the murderers should get a second chance to prove his non-innocence.