For those of you wondering what calf brandings and riding along Custer's Trail, dealt with in my last two blogs, has to do with Sleuth Sayer's theme of mystery, crime and criminals, hang on, this is where it all comes together.

About mid-career, the agency sent me back east to Conspiracy School. Here, the Wise Men taught us how to use evidence from already existing cases along with witness testimony in order to bring grand jury indictments against drug suppliers further up in the hierarchy. It was a way to reach out and touch some of the hard to get guys. To implement this training, I took full advantage of the Federal Sentencing Guidelines which stated that a defendant could get a lesser sentence if he cooperated.

The starting point for this cooperation was for the defendant to sit down with me for several hours in which he provided details of every deal he'd ever done, to include the who, the where, the when, the amounts, how it was transacted and what telephone records, motel records, airline tickets, vehicle rentals, financial records or other evidence might exist for me to build a case, even if the supplier was in another country. It was grueling work, building a time line and going over and over the facts to pry out any useful gem of information.

At the end of our sessions, I had learned to ask three simple questions:
1)  Have I asked all the right questions?
2)  Is there anything else you haven't told me?
3)  Are there any other crimes we need to talk about?
It seems that once, during a call back interview when I confronted a defendant about leaving out some information in a previous session, his excuse was that I hadn't asked the right questions, thus my utilization of Questions 1 & 2.However, it was the answers to Question #3 that sometimes provided unexpected stories. Like the time I debriefed a guy we'll call Charlie Lewis.

Charlie was a hired ranch hand who had fallen in with bad companions, although in his case it didn't take much to get there. Seeing the high rate of financial return and the low work requirements for dealing dope, as opposed to pulling calves and tending livestock for other people, Charlie became an entrepreneur at a low rent motel. Unfortunately, his desire for easy money put together with his ignorance of the downside to this type of business soon had him sporting some shiny, new wrist jewelry.

So, when I got to Question #3 with Charlie, his reply was, "Well, I used to steal slicks."

Now, I had no idea why anybody would want to steal bald tires, and it must have showed in my response.

"Yeah," said Charlie as he proceeded to educate me about "slick" being a reference to an unbranded calf, one which still had a slick or unmarked hide, and therefore was easy to sell to an auction barn with loose requirements. His tale went something like this. 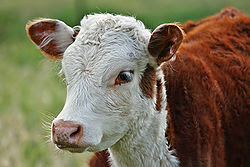 In the dark of night, Charlie and one of his hard-up-for-cash, thieving partners would park their pickups and livestock trailers on a lonely country road not too far from a pasture gate. They'd saddle up their horses, open the gate and ride through some rancher's vast grass land until they found part of his herd. Naturally, they picked a ranch which hadn't gotten around to branding yet. 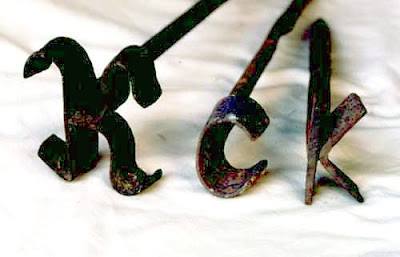 Rounding up as many "slicks" as the two of them could handle, they herded them back to the gate and into the livestock trailers. Afterwards, they drove all night to a stock yard down in Nebraska where a one-eyed stock dealer would purchase the calves with no questions asked. However, there was one midnight roundup which still bothered Charlie.

They'd gathered up some slicks and were headed back to the pickup when it started raining hard, and finally got down right miserable trying to keep their small herd together. Spying a deserted ranch house nearby, the two partners decided to pen the calves up inside the house and shut the door. Then, they'd go home, get dried out and rested up, and come back in the morning to retrieve their ill gotten gains.

The next morning, Charlie's partner failed to show up and get him. Charlie waited until well after daybreak before deciding to drive out to the deserted ranch house and load the calves up himself. But, when he arrived at the abandoned house, it was empty. Later, Charlie heard that his so-called partner had been spending lots of money in the local bars down by the Rez, As Charlie sadly lamented, "There really is no honor amongst thieves." And, that was the end of his tale, but not the end of the story.

Years later, on one of the Custer Trail Rides, that ole cowboy, that I'd helped round up his beef and then trail them off goverment pasture and over to his ranch land, came up to me in camp.

"I hear you know Charlie Lewis," he said. 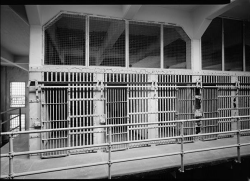 "I hired him straight out of college to help me at calving time."

That was news to me. I had no idea Charlie had ever gone to college. The old rancher soon clued me in that "college" was a local euphemism for prison, because it was an institution where those in attendence got educated into all types of crime.

I had to admit, he had a point.

"Yeah," he continued, "and when we got done with calving that year and I got to tallying up the count, I happened to mention in front of Charlie that we were a couple of calves shy."

I immediately began to wonder if the rancher suspected Charlie of being up to his old tricks.

"Nope," replied the rancher, "Charlie was so happy I'd given him a job so he could get out of college a few months early that he made me an offer on the shortage."

"Don't worry about the missing ones," Charlie is reported to have said. "I know where I can get you a couple of slicks to replace those two."

The old rancher hurriedly declined Charlie's generous offer, but I've often wondered how Charlie turned out after that. Last I heard, he had a good job working for an interstate company. Could be an interesting situation, depending upon how often they update their inventory.
Posted by R.T. Lawton at 00:01

great story, R.T. i dont know how to link to it from this ipad, but if you go to Youtube and type in
stan Rogers Night Guard
You will hear a song about stealing slicks by a great Canadian songwriter.

Rob, just finished listening to Rogers' "Night Guard." He pretty well covered the herd owners' side. About the time I moved to Rapid City to open the office there was an incident in the Black Hills of an angry rancher shooting a cattle thief out of the saddle. Caught in the act. No charges were pressed on the rancher, and the thief went to that Big Roundup in the Sky.

Rob, just finished listening to Rogers' "Night Guard." He pretty well covered the herd owners' side. About the time I moved to Rapid City to open the office there was an incident in the Black Hills of an angry rancher shooting a cattle thief out of the saddle. Caught in the act. No charges were pressed on the rancher, and the thief went to that Big Roundup in the Sky.

Most people don't know it, but rustlin's still a serious business. If a slaughterhouse isn't choosy about muffed brands or ear tags, it can be a disastrous setback for farmers and ranchers.

But so is tree rustling. Imagine 150 year old walnut or cherry trees… vanishing when you take a vacation.