St. Cloud, FL.  St. Cloud is a pretty little town south of Orlando that hasn't quite lost its rustic flavor. I enjoy staying with friends here, but I worry the drive for growth may damage what makes it worthwhile. But I digress.

The Orlando Sentinel reports an investigation is under way, but I think it went something like this: "Damn it, John. For the last time I'm telling you not to point that in my direction…" Blam! "Owwww!"

This is not related to the Oregon cretin who fought in court for the right to give cops the finger. Sheesh, Bubba, pick your battles.

Fort Lauderdale, FL.  Follow this: A Coral Springs dude went to court for his parole hearing. While there, he stole the judge's nameplate off the Broward County courtroom door. He then posted photographic evidence of his misdemeanor on Facebook, whereupon deputies arrested him.

Rubbing Out a Child

Miami, FL.  A couple of parents didn't sign consent forms (and local news reported they didn't pay) for an elementary school group photograph. Following the orders of the PTA, the cameraman used Photoshop to erase one of the children. As for the other child, well, see for yourself.

Manatee, FL.  Man, those Manatee County women are hungry! A woman offered sex in exchange for two double cheeseburgers, according to a deputy. Meanwhile, a woman under arrest in the county jail bit an officer so hard, she lost her two front teeth.

♬♩ All I Want for Christmas… ♪♫

But Officer, These Are my IDs

Vero Beach, FL.  When asked for identification, a Vero Beach Vixen bared her breasts, where she had tattooed "Poem of Dead Tree". Will Greenlee reports close inspection couldn't determine whether the poem was "a haiku, sonnet, ode, couplet, ballad, epic or limerick or whether iambic pentameter is involved" or even if the poem was self published. 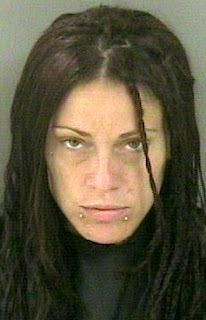 Bradenton, FL.  After a stop for a broken muffler, police not only found drugs in the car, but also found the driver hid hydromorphone in her dentures. However, this next story…

Niceville, FL.  Officer Mary-Kathleen Devine stopped two women driving a car suspected in a crime. One of the woman had a treasury of concealed items in her pants or, as the Sunshine Slate delicately put it, stashed in her lady locker.

Fort Pierce, FL.  This story is about a stolen vehicle and, well, you'd better read the article for yourself. Yep, this is Florida.

Dania Beach, FL.  Oneal Morris, the transgender woman (M➠F) arrested in Miami last year for 'enhancing' the butts of others with such Big Lots materials as construction caulking compound, cement, and Fix-a-Flat for the bargain price of $700,  is back in the news again for doing the same thing in Broward County.

It's not clear 'patients' noticed the perpetrator's own backside.

Sanford, FL.  As most of you know, George Zimmerman has been arrested and charged with second degree murder in the Trayvon Martin case. Most people are satisfied, the Martin family urges this to be about justice and not vengeance, and the governor is assembling a task force to review our crazy Stand Your Ground law that precipitated so many unpunished murders here.

Rev. Al Sharpton gave a surprisingly temperate speech saying no one should gloat, while Zimmerman supporter and legal expert Sean Hannity claimed his conversation with Zimmerman was 'privileged', whatever that means. So, with a bit of luck and cooler heads, we might actually reach a point where we perhaps dismantle one of the more ill-conceived laws of recent years and attain a judgment that doesn't ruin a second life.

In the meantime, Florida continues its ongoing craziness. We don't want you to miss out, do we?
Posted by Leigh Lundin at 00:01