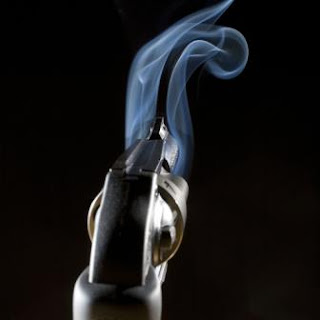 I suppose there's something I ought to get off my chest -- before you find out from somebody else, and feel I betrayed your trust by not disclosing it up-front.

You see: I smoke cigars.

Five to ten a day, actually.

And, if you happen to be one of those very kind souls who thinks: "Well, maybe he only smokes little ones, with that flavored tobacco that doesn't smell so bad," I'm afraid I have to disabuse you of that notion.

The cigars I smoke aren't small at all; they're usually six to eight inches long, by a fifty-four to sixty ring gauge. Sometimes larger. (Maybe this is a good time to ask Rob if congress can confirm that Freud really said, "Sometimes a cigar is just a cigar.") Additionally, my cigars are never made from sweet smelling flavored tobacco; they're malodorous and strong. Very strong. Fidel Castro Cigar strong (which means they're rough--and absolutely evil-smelling ... if you don't like cigars, that is.)

I acquired this "classy" habit for the same reason most Special Forces Engineer Sergeants do. You see, an SF Engineer is the "Demo Man," or explosives expert on an A-Team. We're taught to construct field-expedient demolitions and/or incendiary devices out of common household products, so that we can fabricate and employ explosives even when working in a denied environment (a place ruled by the other side during war time) when we haven't received a resupply in a while.

And, like every other SF Engineer who's served time on Smoke Bomb Hill back at Ft. Bragg, I was taught that a cigar can be used as a "punk" to light military time-fuse during high wind conditions. (You can't do this with a pipe or cigarette, because they don't burn hot enough to ignite the powder train inside the fuse.) Consequently, I taught myself to smoke cigars. And, if you ever wind up meeting a dozen men who work on an A-Team for some reason, it's a good bet that the two guys smoking cigars are the Team's Engineers.

Naturally, over time I came to learn a few tricks of the trade concerning how to light time-fuse this way. First: it helps to tap the ash off the end of your cigar before you hold it to the fuse. Otherwise the ash can act as an insulator, and you might wind up melting the plastic casing around the fuse without igniting the powder train within. This means you have to hack off a length of melted fuse, and try all over again. Likewise, it helps if you give the cigar a few strong puffs, to stoke the heat, just before touching it to the fuse. And, finally: Try not to draw (inhale) through the cigar, once you've touched it to a fuse, because some of the plastic usually melts into the end of the cigar -- and dragging those noxious fumes into your oral cavity is a rather unfortunate experience.

I picked up that last tip, as a very new engineer, when lighting a series of four charges my A-Team had emplaced during a training raid. The charges were roughly fifty meters apart, and I had to sprint between them in order to minimize our time on target. By the time I was finished puffing the fuse on the fourth charge to life, my head was spinning. When we pulled off the target, I was doing my impression of "Julie" in the opening credits of that old television show The Mod Squad -- my feet barely touching the ground as two guys ran alongside, carrying me between them.

What does all this have to do with sleuthing, you ask?

Well, since I enjoy cigars, I sometimes have my story characters stop by my favorite cigar store here in Scottsdale. I thought this was an original idea of mine -- until Leigh pointed out that this idea was so old, it 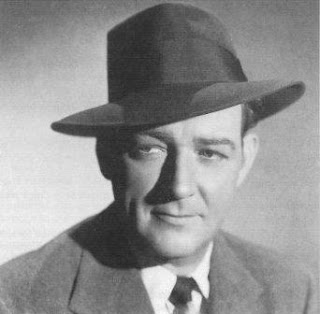 had been used in Martin Kane, Private Eye, which is billed as the very first television detective show. Martin Kane (played by William Gargan --seen in the photo, left. Gargan was the first of three actors to play the roll).

In the show, Kane smoked a pipe, and each episode featured a trip to the detective's tobacconist, where Kane would review the case -- and discuss tobacco with the store's proprietor -- because the show was sponsored by the U.S. Tobacco company. These tobacco shop trips were actually an early form of product-placement advertisement.

I'm disappointed to add another entry to my "nothing new under the sun" file, but wasn't really too surprised. I've noticed that (particularly in the past) an inordinate number of fictional detectives seem to smoke.

I suspect part of the reason is that smoking makes what actors call "good stage business." In other words, it gives characters something to do with their hands. Additionally, a writer can use details concerning someone's smoking to highlight character traits. What is the difference, for instance, between a man who uses a set of gold snippers to clip the end off his cigar, then lights it with a solid gold lighter -- compared with -- a man who bites the end off his cigar, spits it out, then lights up with a battered Zippo. What if he lights it with a match that he strikes on his thumbnail? Or, on the heel of his work boot?

Would a woman's character change, in your mind, if instead of smoking a cigarette, she smoked a cigar? What if she were the one biting the end off, and striking the match on her work boot?

I suspect that the nature of the characters described above shifts subtly as you go through the two paragraphs. Did you wonder, for instance, if the cigar smoking woman in work boots was a contemporary feminist, or did you perhaps jump to the idea that she inhabits a WWII setting and works as a "Rosie the Riveter?"

It may interest you to know, incidentally, that in my part-time occupation as a fill-in body at the cigar store near my house, I've become acquainted with several women who smoke cigars, and one or two who smoke pipes.

I freely admit that:
(A) Other props used by characters can reveal the same or similar character traits.
(B) Smoking is bad for you.

On the other hand, when someone smokes in a novel or film, particularly a contemporary one, I think that reveals an aspect of his/her character.

Smoking and detectives have traveled around in the same circles since long before the old pulp days. In fact, if you think about it,: Sherlock Holmes smoked pipes -- and cigars, if I recall correctly.

Can you imagine Marlowe without at least an occasional smoke in his hand? Would it change how you perceived his character, or even subtly alter the tone of the enttire w 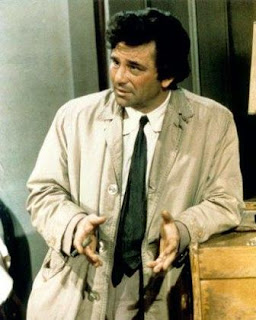 ork? I think it would, but you're free to disagree with me. In fact, that's what we've got the comments section below for. So -- feel free to blast away! (Assuming we've worked out the bugs.) You won't hurt my feelings; I've been called reams of unprintable names by army sergeants screaming at the tops of their lungs, and learned to let it roll off my back a long time ago.

What about Peter Falk's character in the TV show Columbo? Can you envision Lt. Columbo without his trademark cigar stump (it seemed almost never to be lit)? Admittedly, he would still have that car and trench coat, the ruffled hair, and sometimes that basset hound. But, can you see him holding up a gnarled hand to say, "Just one more question, sir," without a cigar stump parked between two of his fingers?

And, as long as we're covering television detectives, we might as well cover the other side of the balance sheet too 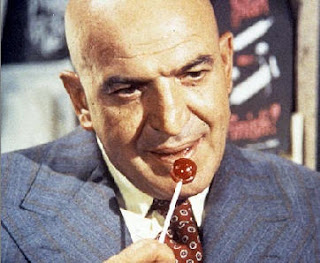 
Telly Savalas smoked cigarettes through much of the first season of Kojak. But, the writers changed that -- supposedly in response to non-smoking pressure from the public -- by creating a scene in which a meter maid chewed him out for smoking all the time. She handed him a Tootsie Pop to chew on, instead. And, the rest (as they say) is TV history.

The trend of connecting tobacco to fictional detectives has been changing for a long time, and continues to be in flux today. I'm not the kind of guy who advocates that anyone take up smoking anything (unless we're talking about somebody who walks into the cigar store while I'm working). But, it seems to me that smoking has its uses, when it comes to detective fiction -- if for no other reason than to demonstrate who the bad guy is.