by Melodie Campbell
One of the great discussions in the author world is whether your book should have a theme or not. Of course it’s going to have a plot. (Protagonist with a problem or goal and obstacles to that goal – real obstacles that matter - which are resolved by the end.) But does a book always have a theme?

Usually when we’re talking ‘theme’, we’re putting the story into a more serious category. Margaret Atwood (another Canadian – smile) tells a ripping good story in The Handmaid’s Tale. But readers would agree there is a serious theme underlying it, a warning, in effect.


Now, I write comedies. Crime heists and romantic comedies, most recently. They are meant to be fun and entertaining. So you can imagine my surprise when I discovered recently that all of my books have rather serious themes behind them.


Last Friday, I was interviewed for a CBC (Canadian Broadcasting Corporation) mini-documentary featuring female Canadian crime writers. During this, the producer got me talking about the background to my most awarded series, The Goddaughter. This crime caper series is about a mob goddaughter who doesn’t want to be one, but keeps getting dragged back to bail out her inept mob family.


I know what it’s like to be a part of an Italian family that may have had ties to the mob. (In the past. My generation is squeaky clean.) The producer asked me If that informed my writing. Of course it did. But in our discussion, she stopped me when I said: “You are supposed to love and support your family. But what if your family is *this* one?”


Voila. There it was: a theme. All throughout the Goddaughter series, Gina Gallo grapples with this internal struggle.

So then I decided to look at my other books. The B-team is a spin-off from The Goddaughter series. It’s a funny take on The A-team television series. A group of well-meaning vigilantes set out to do good, but as this is comedy, things go awry. In fact, the tag-line is: “They do wrong for all the right reasons…and sometimes it even works.”


Was there a theme behind this premise? Was there a *question asked*? And yes, to me, it was clear.


In The B-Team, I play with the concept: Is it ever all right to do illegal things to right a wrong?


Back up to the beginning. My first series was fantasy. Humorous fantasy, of course. Rowena Through the Wall basically is a spoof of Outlander type books. Rowena falls through a portal into a dark ages world, and has wild and funny adventures. I wrote it strictly to entertain…didn’t I? And yet, the plot revolves around the fact that women are scarce in this time. They’ve been killed off by war. I got the idea from countries where women were scarce due to one-child policies. So what would happen…I mused…if women were scarce? Would they have more power in their communities? Or would the opposite happen. Would they have even less control of their destinies, as I posited?


A very strong, serious theme underlying a noted “hilarious” book. Most readers would never notice it. But some do, and have commented. That gets this old gal very excited.

I’ve come to the conclusion that writers – even comedy writers – strive to say something about our world. Yes, I write to entertain. But the life questions I grapple with find their way into my novels, by way of underlying themes. I’m not into preaching. That’s for non-fiction. But If I work them in well, a reader may not notice there is an author viewpoint behind the work.


Yes, I write to entertain. But I’ve come to the conclusion that behind every novel is an author with something to say. Apparently, I’m not as flaky as I thought.


What about you? Do you look for a theme in novels? Or if a writer, do you find your work conforms to specific themes?

Got teen readers in your family? Here's the latest crime comedy, out this month:


On AMAZON
Posted by Melodie Campbell at 00:30 13 comments 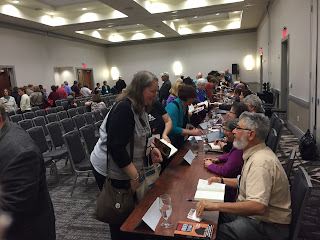 That last part is a joke: his name was brought up by someone who knew nothing about the anthology.  But I am glad to be in the book and I hope, well, that it makes you happy.
Posted by Robert Lopresti at 00:00 8 comments