During my first night shift at a new hospital, a prisoner escapes while awaiting medical attention. I chase after him through an empty hallway, open the door to a stairwell, push open a second door, and discover his footsteps in the snow.
Only afterward, when the police have rounded up the prisoner and I'm safely home, do I realize that I could have been taken hostage if the prisoner had been lurking inside the stairwell.
I begin researching hostage takings in hospitals.

Richard Worthington storms into a suburban Salt Lake City hospital with a shotgun, a .347 magnum revolver, and a bomb. He screams, “My life was perfect! Dr. Curtis ruined everything! He butchered my wife!”
He wants to kill the doctor who performed a tubal ligation on his wife, which she'd requested after eight difficult deliveries. Worthington takes two nurses hostage, shoots the one who tries to wrestle the shotgun from him, and breaks into a room where 22-year-old Christan Downey, surrounded by her family and her labour nurse, is about to deliver her first baby.
Worthington orders the nurses to bring two other newborns into the room with them. Then he forces Christan's partner, Adam Cisneros, to retrieve the homemade bomb Worthington had planted at the front entrance.
Worthington tells one nurse, Margie Wyler, to call his wife. After the call, he shoots the telephone, yelling, "I'm going to die tonight, and so are all of you!"
Worthington decides to move them up to the third floor, where Dr. Curtis's office lies, even though Christan can't walk because of her epidural. She lies in bed, pushed by Adam and Margie; the two infants are carried by Christan's sister, Carre, and the second nurse, Susan Woolley.
Christan's epidural begins to wear off. Susan whispers, "Margie, Christan must have that baby."
Christian, coached by Margie and Susan, delivers a healthy baby girl, Caitlin, at 3:23 a.m.
Police negotiations break down. Sometimes Worthington answers the functional phone lines, sometimes not. He demands to speak to his wife or to Dr. Glade Curtis. But he warms to Margie, calling her "a beautiful woman" when he discovers that she has 11 children.
By late morning, Worthington is screaming less and begins to weep. The adult hostages pray.
Eventually, Worthington allows Adam and the nurses to walk to the door, but becomes enraged when he sees the SWAT team. He pulls the nurses back in and demands to see his wife.
The police refuse, but Worthington allows Susan to come into the hall to repeat the request.
They refuse again.
"But you'll let seven of us die?" cries Susan, although she returns to the room.
Meanwhile, police negotiator Don Bell, knowing that a hostage taker is less likely to kill someone he cares about, asks Margie to hug Worthington.
"I don't know if I can," she says to him over the phone.
"You must," Bell replies.
She does.
"The next thing I knew, Susan and I were running down the hall--free!" says Margie. Susan is carrying one of the babies, Erich. Carre follows, holding a second baby, Bryan. Last to leave are the newest mother and child, Christan and Caitlin.
At 18:00, eighteen hours after the ordeal began, Richard Worthington begins to walk out of the office before dashing back in. The officers tackle him.
Worthington pleads guilty to criminal homicide, aggravated burglary, and eight counts of aggravated kidnapping. He receives 35 years to life. He claims that his now ex-wife, Karen, was responsible for his actions. In 1993, he hangs himself in his cell.
Alta View Women's Centre increases security at the hospital
Margie returns to nursing after only three weeks.
It takes 2.5 years of therapy before Susan finally comes to grip with her post-traumatic stress. She, too, returns to nursing.
Christan enters Alta View on November 1st, 1994, to give birth to her second daughter, Alexa. She asks for a different room.

Pregnancy and giving birth is a time where you are intensely vulnerable, both physically and emotionally.
I started writing the latest Hope Sze mystery, Stockholm Syndrome.

I knew Dr. Hope wouldn't be pregnant ("I'm on the pill, thanks," she points out), but she is exactly the kind of person who would be sucked into a hostage taking. She would have to take care of a woman in labour. At gunpoint. Trying to outwit and outplay the killer.
This one is a thriller. This one, you can't put down. This one, I almost can't read any excerpt at a reading except the first page or two, because jumping ahead is such a spoiler.

Sorry, Steve. CBC Radio Ottawa Morning's Robin Bresnahan and Ontario Morning's Wei Chen were also interested in the link between reality and fiction. And I'm ever so grateful that CBC Fresh Air's Mary Ito took the time to ask me about my "snarky" heroine and "very graphic" thriller.

If you want to hear more, I'm appearing at the Brantford Public Library on May 11th for Mystery Month. I originally wrote this post so I could upload videos for the talk, but I'm running out of time and will have to upload them later.

In the meantime, Happy Mother's Day. I say that without irony. In the end, if you look at the real-life hostage taking, who survived? Think of the courage it would take to have a baby, or return to nursing, in the same building where you were held at gunpoint for 18 hours.

I worked this Mother's Day, and it was busy, but much more peaceful than that other hospital in 1991. I'm proud of the book I wrote, and I think it's good practice to consider how we might act in terrifying situations, so that we have some mental preparation, if it should ever come to pass.

Hug your loved ones tight.
Posted by Melissa Yi at 00:00 8 comments 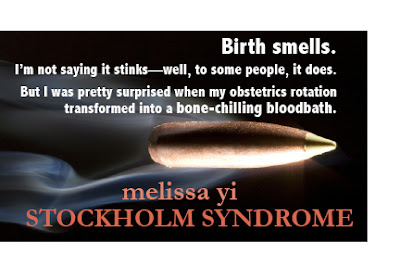 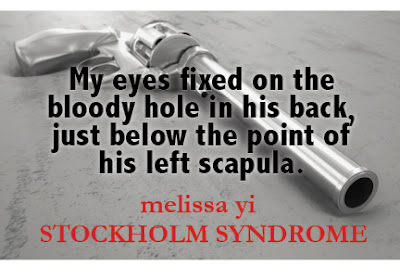 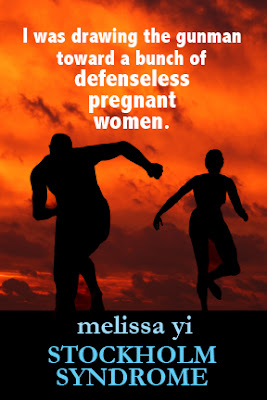