by Melodie Campbell
Someone slipped up and made me a finalist in two categories for the Arthur Ellis Awards for Crime Writing this year (The B-Team, Novella, and A Ship Called Pandora, short story.)  Naturally, I’m up against some of the best (here’s looking at you, yet again, Twist Phalen.)

By strange coincidence, I’m also emceeing the awards on May 23.  Which goes to show how truly confusing we can be in Canada.  Because you see, in days of yore (ten to three years ago) I was the one organizing the gala, along with a team of truly wonderful but sweetly innocent individuals who had no idea what they were signing up for.

The short list announcement yesterday got me thinking about my first time organizing the event.  I believe this may have also been my first post on Sleuthsayers.  Yes, that many years ago.  Time for a revisit.  Warning: This is nonfiction. I swear.

MURDER AT THE CRIME WRITING AWARDS
Okay, I haven’t done it yet.  But I may soon.

I’m the Executive Director of a well-known crime writing association.  This means I am also responsible for the Arthur Ellis Awards, Canada’s annual crime writing awards night, and the resulting banquet.

THE SEATING ARRANGEMENT
A can’t sit with B, because A is in competition with B for Best Novel.  C can’t sit with D because C is currently outselling D.  E can’t sit with F because they had an affair (which nobody knows about.  Except they do.  At least, the seven people who contacted me to warn me about this knew.) G can’t sit with H because G’s former agent is at that table and they might kill each other.  And everyone wants to sit with J.

So we’re stuck with chicken again.

Melodie Campbell’s caper novella The B-Team has been shortlisted for the Arthur Ellis Award.  You can pick it up for a steal (sic) at Amazon, B&N, Chapters, and all the usual suspects.  Even Walmart, because we’re a class act.  Sometimes even Zehrs.  I’ll stop now. 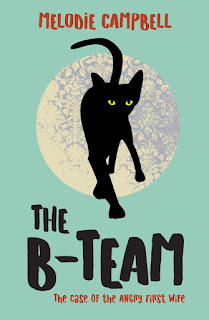 The 'pee first' warning is given when humorous material follows.  'Nuf said.

Posted by Melodie Campbell at 00:30 9 comments