by Art Taylor
As I've mentioned a few times before, I often start a writing session with a little bit of reading—most frequently from a writing guide of some kind, to ease me into thinking about craft. In a column earlier this year, near the start of the semester, I talked briefly about Raymond Queneau's Exercises in Style, which I had begun delving into a page or two a day. Here's what I wrote then: 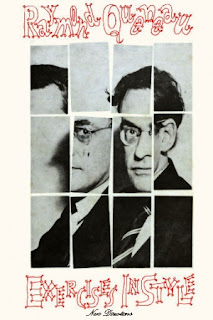 
That page or two every day or so has continued intermittently over the semester—as has my writing, I'm sad to say (too intermittently)—and there's still a good chunk of Exercises in Style left to go. But I've finally decided to put the book away without reading it in full.

As even a quick glimpse at the book's cover reveals, Exercises in Style has its champions. Italo Calvino said that the book "gives rise to a whole range of wildly diverse literary texts," for example, and Umberto Eco compared it to "inventing the wheel."And while that back cover quotes the original Washington Post review, the Post review of this new edition declares the book simply a "revolution."

I'll agree. There's something exciting about the variety of approaches Queneau employs in telling the story, the range of storytelling techniques and tones, the way that all of it opens up a little wider the world or writing, our understanding of that world. "Apotrophe" begins "O platinum-nibbed stylograph, let thy smooth and rapid course trace on this single-side calendered paper those alphabetic glyphs which shall transmit to men of sparkling spectacles the narcissistic tale of a double encounter of omnibusilistic cause." A few pages later, "Telegraphic" offers something drastically different: "BUS CROWDED STOP YNGMAN LONGNECK PLAITENCIRCLED HAT APOSTROPHISES UNKNOWN PASSENGER UNAPPARENT REASON STOP...." In between are brief exercises in the senses, among them "Olfactory" ("In that meridian S, apart from the habitual smell, there was a smell of beastly seedy ego, of effrontery, of jeering, of H-bombs, of a high jakes, of cakes and ale, of emanations, of opium, of...."), "Gustatory" ("This particular bus had a certain taste. Curious, but undeniable."),  and "Auditory" ("Quacking and letting off, the S came rasping to a halt alongside the silent pavement").

All these are terrific and provocative. But then I hit several sections of "Permutations" including "Permutations by groups of 2, 3, 4 and 5 letters," which begins "Ed on to ay rd wa id sm yo da he nt ar re at pl rm fo an...." And I'll admit I'm not sure what to do with it—or more to the point, how reading such passages might help boost my own writing, though I'm sure even these specific passages might well have sparked other writers' imaginations.

After hitting that section, I found myself browsing ahead rather than reading straight through. And now I've found myself putting the book aside.

A couple of questions for others here:
I'm curious particularly on that latter question—since readers tend to have very strong opinions about whether a book once started absolutely needs to be finished.

IN OTHER NEWS: I was very pleased that my fellow SleuthSayer Rob Lopresti chose my story "Restoration" from Crime Syndicate Magazine's debut issue as the "best mystery story I read this week" over at his blog Little Big Crimes. "Restoration" was a real departure in many ways for me—a quick foray into more speculative fiction—and it struggled for a while to find a home, both in more traditional crime fiction publications (too much science fiction) and in the few science fiction magazines I submitted to (not enough for them). Given all that, I was thrilled when it found a home at the edgy and excellent Crime Syndicate and especially pleased now that it's gotten such a kind reception at Little Big Crimes. Thanks so much, Rob!

And finally, a quick plug for an upcoming event between now and my next column here—a very special one for my wife and me. On Monday, June 6, at 6 p.m., my wife—Tara Laskowski—and I will be giving a joint reading at the Easton branch of the Talbot County Free Library in Easton, Maryland. Tara will be reading from her new story collection Bystanders and I'll be reading from On the Road with Del & Louise. While it's not entirely uncommon for Tara and I to appear on the same program, what makes this event special is that June 6 is our seventh wedding anniversary! At least we'll be together for the evening, right? Anyone who's in the area, please do come out to help us celebrate. :-)