by Robert Lopresti
We did this back in 2017.  Here we are, back again, with all new entries.

Below is a list of characters from popular culture.  But how did they become popular? See the box on the right?  All the characters began life in one of those media.  See if you can match 'em up.  Be warned: there isn't a one-to-one match up, meaning exactly one character started in a TV show, etc.

Bambi.  Novel. Austrian novelist Felix Salten (an enthusiastic hunter, by the way) wrote Bambi: A Life in the Woods.  It was more or less what we would today call a Young Adult novel.   Published in 1922 and became an immediate success.  British novelist John Galsworthy called it  a "little masterpiece."  The Disney film version came out in 1942.  By the way, Thumper the Rabbit broke into show biz through the movies.  He is part of the Disneyfication  process, not appearing in the book.

The Lone Ranger. Radio. The mysterious masked man started life on the radio in 1933.  I bring him up because of a story that has spread in recent years that the character was inspired by Bass Reeves, a legendary (though very real)  hero, the first African-American U.S. Marshal in the west.  A biography of Reeves suggested that he inspired the Lone Ranger, but there is zero evidence that the creators of the show had ever heard of Reeves.

Radar O'Reilly.  Novel. The very first character to appear in the novel MASH by Richard Hooker (real name Hiester Richard Hornberger Jr.) is Radar O'Reilly of Ottumwa, Iowa.  In the movie he was played by Gary Burghoff, who went on to repeat the role in the TV series.  The only other actor I could think of who brought a character from the flicks to the small screen was Richard Widmark with Madigan, but it turns out there have been others. 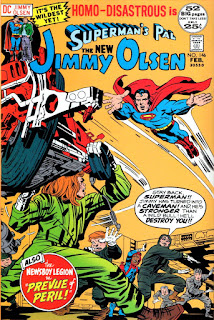 Jimmy Olsen.  Radio. The eternal cub reporter, Superman's Pal, first appeared on The Adventures of Superman radio show in 1940.  He was created basically so the hero would have someone to talk to. We all need that from time to time, don't we?  Jimmy made it into the comics a year later.  Since then he has been in TV and movies as well as having his own comic book.

Raylan Givens.  Novel.  The Deputy U.S. Marshal first appeared as a supporting character in Elmore Leonard's Pronto.  He also showed up in Riding the Rap, before getting a starring role in the short story "Fire in the Hole."  This story, in which Givens is punished for an iffy killing by being assigned to his home state of Kentucky, inspired the TV series Justified.  The producers were so dedicated to making a work in the Elmore Leonard mold that they gave out bracelets to the crew that read What Would Elmore Do?  Most critics agreed that they succeeded and Leonard was inspired to write Raylan, supposedly a novel, but essentially designed to be broken up into three episodes of the series. In fact, two parts were used that way.

The Mighty Casey.  Newspaper.  Ernest L. Thayer's poem "Casey at the Bat," first appeared in a San Francisco newspaper on June 8, 1888.  It happened to be read by Arch Gunter, a visiting novelist nd playwright.  He was so taken with the work that he clipped it out.  When he arrived in New York he shared it with a theatrical producer who asked his star comedian, DeWolf Hopper, to memorize it and recite it during that evening's performance.  Thus Hopper began a new career as the prime interpreter of the poem for forty years, on stage, radio, records, and movies.  It does make you wonder what minor masterpieces are buried in a century of newspapers....

Stuart (Stu) Bailey.  Novel.  Roy Huggins created private eye Stu Bailey in The Double Take.  He felt the character was so clearly a ripoff of Philip Marlowe that he sent a copy to Raymond Chandler with an apology.  Chandler apparently replied that he'd seen worse.  When Huggins moved to television Bailey became one of the P.I.'s who worked at 77 Sunset Strip.  Of course, Huggins also created Maverick, and The Rockford Files.

Lamont Cranston.  Magazine.  I just know I'm going to get an argument over this one.  Bear with me.  In 1930 the Street and Smith company decided to create a radio show to promote their Detective Story Magazine. The narrator was a mysterious character called The Shadow.

Pretty soon listeners were going to the newsstand and asking for "the Shadow magazine," which didn't exist.  There is a modern MBA rule that says: Let your customer tell you what business you are in.  Street and Smith tookthe hint.  They founded The Shadow Magazine and magician Walter B. Gibson filled it with a new novel twice a month (he had to be a magician, don't you think?), writing under the name Maxwell Grant.  He wrote 282 of the tales over 20 years.

In the pulp magazine the Shadow's real identity was Kent Allard but he sometimes pretended to be other people, including man-about-town Lamont Cranston, who was frequently out of the country.  In the radio version, the Allard name was dropped and the S-man was simply Cranston.  Simple, right?

Mack the Knife.  Opera. Yes, but which opera?  The popular song is a bowdlerized version of the song from Kurt Weill and Bertold Brecht's Three Penny Opera.  But the song tells the story of Macheath, who first appeared in John Gay's Beggar's Opera, written two hundred years earlier (and inspired by an idea of Jonathan Swift's!).

Alexander Waverly.  Television. The regional head of the United Network Command for Law and Enforcement was created for The Man From UNCLE, although some see a strong resemblance to the Professor, a spymaster who appears in North by Northwest.  Of course, both characters were played by the wonderful Leo G. Carroll.

Waverly and Carroll almost missed their big chance.  In the pilot for the series  the boss was Mr. Allison, played by Will Kuluva.  However, the network executives told the producers to get rid of the guy whose name began with K, so Kuluva was replaced by Carroll.  Turns out the network had really wanted to dump Russian spy Ilya Kuryakin, played by David McCallum. Fortunately for the show (and thousands of adoring young women) Ilya dodged death, not for the last time.

Carroll, in his seventies. had health problems  during production.  When you see papers scattered across Waverly's desk, some of them are Carroll's script, available for easy reference.  At one point he told the producers that his grandchildren complained that Mr. Waverly never did anything but talk, so they created a scene in which he karate-chopped a bad guy.  When he nailed it the whole crew cheered.

Oh!  Here's a bonus question for you.  The star of The man From UNCLE was, of course, Robert Vaughn.  But do you know what he did in his spare time during production?  The astonishing answer is here.

Posted by Robert Lopresti at 00:00 9 comments