Who is Guarding Your Threshold? 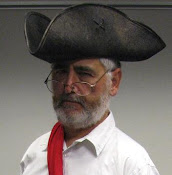 Years ago I explained that the creative process requires two parts of your brain: the Miner (who digs up ideas), and the Jeweler (who turns them into something pretty, or at least sellable).

For the last few days the Miner has been screaming in my ear.  I'm not sure what he wants but it does not pay to ignore him.  (He gets lazy if he thinks you are ungrateful.)  So I am going to use this space to  talk about the subject that seems to be fascinating him at the moment.

It began when I had the privilege of speaking to Malice in Memphis, a writer's group in New Hampshire.   (Okay, it's in Tennessee.)  You can watch it on Facebook.  The subject was short stories.

Our own Michael Bracken was kind enough to attend and during the Q&A he mentioned Blake Snyder's Save the Cat Beat Sheet, a template for plot structure.  I had never heard of it but I have since looked it up and it is quite interesting.  I recommend it.

Not surprisingly, Snyder's template reminded me of another plot outline with which I am more familiar: the Hero's Journey, as explained in Joseph Campbell's The Hero With A Thousand Faces, which I also recommend.  (And when you finish it you will want to buy The Hero With an African Face, by my friend Clyde Ford.  It fills in a part of the canvas Campbell left mostly blank.)

Campbell uses mythology from around the world to synthesize the key elements of the hero myth.  It is important to realize that virtually no story will have all the elements; the variations are part of what makes them so interesting.  All the stations of the journey are worth pondering, especially for a writer, but  the part that the Miner has been obsessing over since Saturday is the Threshold Guardian.

So what the hell is that, you may ask.

Well, it's like this.  The hero (and it could be male or female.  I'm going to go male throughout because most of the examples that popped into my head are boys) is summoned to adventure (by a client knocking on the office door, scavengers selling droids, a white rabbit with a pocket watch...).  But in some stories before his journey can truly begin there is an obstacle in his way, guarding the threshold he must pass.  This may be a person, an object, or even an emotion (like self-doubt) but until he defeats it, the hero is stuck.

To get metaphysical, the threshold guardian is the champion of the unchanging world which the hero is destined to change.  The guardian's mission is to stop the quest before it even begins.

In Harry Potter and the Sorceror's Stone, think of Vernon Dursley trying to keep Harry from reading an invitation to attend Hogwart's School of Magic (what Campbell would label the Call to Adventure).

My novel Greenfellas is about a Mafiosi who decides he needs to save the environment.  The first obstacle he faces is his boss, the capo dei capi,  who forbids his getting involved in such a ca 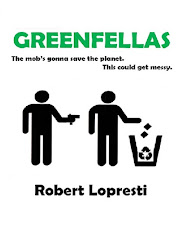 use.  "We aren't the good guys," he insists.  Before my hero can proceed he needs to find a way to work around the head man.
By the way, if the hero defeats the Guardian he may turn into a strong ally.  Think of Inigo Montoya in The Princess Bride.

I am currently working on a short story which begins with my hero (literally) stumbling over a corpse.  I think the threshold guardians are the police detectives who don't want him screwing up their investigation.  But maybe things will turn out differently.

Is that story what the Miner is trying to talk to me about?  Dunno.  Sometimes he provides the answers years before I find the question.  But the important thing is to keep listening.