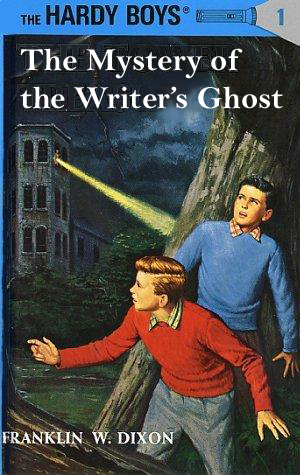 Last week, I joined the ranks of my betters appearing in Ellery Queen’s Something is Going to Happen blog with a little literary history cloaked in a Hardy Boys story. It was fun to write, but that little piece about the most famous mystery author you never heard of, “The Mystery of the Writer’s Ghost,” took a surprising amount of research and included supporting work by Dale Andrews and Rob Lopresti.

I’ll leave it to you to discover how that article unexpectedly ties into this one, but the research of the above led me to focus on a prolific and hugely popular American author I’d read about, but never before read. And to my surprise, reading his works wasn’t work at all. The books are delightful, they are fun and entertaining, not what you might presuppose considering their influence on society.

What other author has the cachet of a man whose writings not only parallels that of Industrial Age America, but so captures the American Dream, he is used as an iconic metaphor?

Occasionally, we hear comparisons with literary figures and when we do, they’re seldom flattering: an Ebenezer Scrooge, a Mrs. Havisham, a Simon Legree, a Stepford wife. When it comes to authors, I’m hard pressed to come up with any names… except one.

Horatio Alger, Jr. is the full name, one of many facts I confess I didn’t know. I’ll pretend my ignorance of the man isn’t abysmal although you’ll see I’m taking steps to correct that.

And why didn’t I know? I grew up often hearing the phrase, “His is a regular Horatio Alger story, knowing what was meant, but without knowing who was referred to. We didn’t study the stories in school, they weren’t on our reading list, and I don’t recall seeing even one Alger novel in my family’s children’s library or my father’s extensive book collection. That’s no excuse, perhaps.

This week I read the first Horatio Alger story, Ragged Dick, serialized in Student and Schoolmate shortly after the end of the American Civil War in 1867. It’s set in a burgeoning pre-modern New York City: Central Park is partly developed, the grandest marble and limestone buildings stand only a few stories tall, street commerce is conducted in shillings and the Brooklyn Ferry costs 2¢.

What I didn’t expect was such a fast, easy read, a fun and funny romp through the streets of New York. The story’s written on multiple levels and it takes a bit of education to get some of the humor. Arguably, Alger’s stories and characters parallel those of Charles Dickens, although contemporary audiences will find Alger more approachable, less literary, and a hell of a lot funnier. (From a writer’s standpoint, I note that Dickens was paid by the word and accordingly padded out his works. In contrast, Alger wrote sparingly and his stories move considerably faster.)

A century and a half ago, the vocabulary of an educated American was 40% larger than it is now. Glance at schoolbooks of the era; the readers were considerably more advanced than those of today, an issue Common Core takes a stab at establishing in a national standard, weak-kneed as it is. Back in the day, advanced curricula included logic, rhetoric, debate, Latin and sometimes Greek. The nineteenth century was a time when schoolwork meant work. An educated child of yesteryear might well outstrip an adult of today in given topics.

The Streets of New York

Ragged Dick is a playful and slyly humorous story with much of the drollery coming from the titular character. For SleuthSayers fans, there is crime: hustles, scams, and thievery. Our little hero is street-wise but he refuses to steal, although there’s one scene where he out-cons a con-man.

With the success of this novel, Alger must have thought he’d stumbled upon a winning formula. In more than a hundred novels aimed at working class youth (but operating on other levels, as above), he repeated the same plot with the same stock characters.

His books have often been called ‘rags to riches’, but ‘rags to respectability’ is far more accurate, earning a way into the middle class structure of this Land of Opportunity through hard work and honesty. It’s hardly surprising his books fell out of favor and out of print during the depths of the Great Depression. Then as now, when the free market stumbled thanks to greed and fraud, Marxism started to look more attractive. But the economic wheel cycled and Alger’s philosophy received new interest and respect during America’s rebuilding in the 1950s. 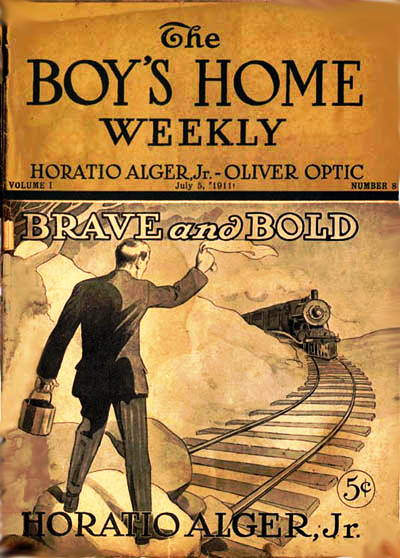 Read it and Reap

I may have begun the book fearing a century-and-a-half-old work might be a bit of drudgery, but to my surprise, I enjoyed the novel despite flaws. Like most children’s books prior to the 1950s, it’s morally instructive but not onerously so. Most readers can take pleasure in the novel’s cleverness and humor.

If I had to come up with a tag line for this witty story, I’d hazard this:


If you enjoyed Spanky and Our Gang’s Little Rascals, you’ll love Ragged Dick.

Oh, and you can find the novels free at several places on the web, and don’t forget to check out the Ellery Queen blog that prompted all this.
Posted by Leigh Lundin at 00:00 17 comments