Spying on Chicago, for a Good Cause 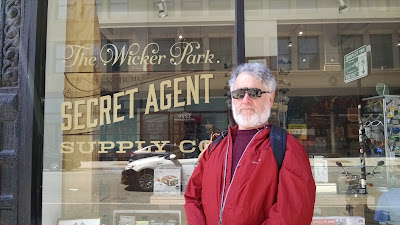 Okay.  Last month I visited Chicago and wandered, not for the first time, into the Wicker Park Secret Agent Supply Company.  You are probably thinking that it is a spy shop, selling listening devices, cameras smaller than a grain of rice, and the like.  You are, of course, wrong.

As the employees confidentially explain to each newcomer: the store is a front.  It is secretly the headquarters for 826CHI, "a non-profit organization dedicated to supporting students ages 6 to 18 with their creative and expository writing skills, and to helping teachers inspire their students to write." So anything you buy in the shop (mostly writing-related material) supports the real work of the organization, which is encouraging kids to write.  Pretty cool, huh?

There are actually seven 826 branches promoting writing in different cities, and each has its own cunning disguise.  For example, in San Francisco 826 Valencia hides behind the Pirate Supply Store.  Clearly these people take kids seriously, but not themselves.

Among the merchandise for sale in the Secret Agent Supply Shop is a small selection of books, including the works of novelist Dave Eggers, which is fair because he is one of the two founders of the organization.  More power to him.

But I was more interested in another book I saw there.  I picked it up and told the enthusiastic salesperson "I have a story coming out in the 2016 edition!"

"Yup, and the same story has been selected for the Year's Best Dark Fantasy and Horror collection."

"Damn straight," I said.  "I've been writing for forty years and this is my first best-of appearance.  Of course I'm going to brag about it."  Which, you may notice, I just did.

Of course, I had to buy something and I did.  See the photo.

Next time you are in Chicago I recommend you drop by.  You don't even need a secret password.

Posted by Robert Lopresti at 00:00 9 comments