I like Australian Westerns. I think the first one I ever saw was The Sundowners, which I've always remembered because of its music--I'm a sucker for movie soundtracks--and since then I've seen a lot of 'em, some good and some not so, and several of them many times. These oaters from Oz have also been referred to as Kangaroo Westerns, or--in a play on the term Spaghetti Westerns--Meat Pie Westerns.

Something I've found interesting about all this: The first in the genre was The Story of the Kelly Gang (1906), but after that there was a 30- or 40-year gap in the production of Australian Westerns, because of a law there that banned the depiction of so-called "bushrangers" in films. The down-under horse-opera industry picked up again in the forties, and the one I remember most from that time period is The Overlanders--it was filmed before I was born, but I've seen it several times, most recently on YouTube this past week.

Anyhow, here are a dozen of my favorite Australian Westerns, with, in my opinion, the best ones listed first:

1. The Man from Snowy River (1982) -- I'm crazy about this movie. Great acting (especially Kirk Douglas in a double good-guy/bad-guy role), a good coming-of-age plot, and maybe most of all a good love story. And I know I get hung up on this sometimes, but it has a fantastic musical score.

2. Quigley Down Under (1990) -- Mostly American and British actors in an Australian Western, but it works. Who in our universe doesn't like watching Tom Selleck, or Alan Rickman? There's even (spoiler here) a final stonefaced showdown.

3. The Sundowners (1960) -- Dated now, but still fun. I liked a lot of movies made in the sixties, and this is the only Australian Western I remember from that decade. Robert Mitchum, Deborah Kerr.

4. The Proposition (2005) -- A different kind of story, ultra-gritty and violent. Interesting plot and great characters, but don't expect many pretty faces. (I'll watch Guy Pearce in anything, ever since L.A. Confidential.)

5. Mystery Road (2013) -- More of a contemporary mystery than a Western, but it features Old West themes and values, and an interesting plot.

6. The Tracker (2002) -- The title character is a Native Australian hired to help a posse of white men find one of his countrymen who killed a white woman.

7. Australia (2008) -- This movie tries to be an epic and falls a bit short, but with native sons and daughters Hugh Jackman and Nicole Kidman it worked anyway, for me. Not that it matters, but it has one of the best trailers I ever saw.

8. The Overlanders (1946) -- A story about a cattle drive across the Northern Territory from Wyndham to Brisbane. A very old movie but still fun to watch.

9. Ned Kelly (1970) -- Probably not as as good as some of the later movies about the Kellys (I haven't yet seen 2019's True History of the Kelly Gang), but I enjoyed it. Mick Jagger, believe it or not, in the title role.

10. The Legend of Ben Hall (2016) -- More bushrangers and their mites. Everybody in this movie looks like Jason Robards in Once Upon a Time in the West.

11. Sweet Country (2017) -- Another story of Aussie racism: A Northern Territory Aborigine shoots a white man in self-defense in the 1920s and then goes on the run. (Sort of The Tracker from a different perspective.)

12. Mad Dog Morgan (1976) -- Dennis Hopper in Australia, which is interesting in itself. Low-budget and a little sloppy at times, but enjoyable. 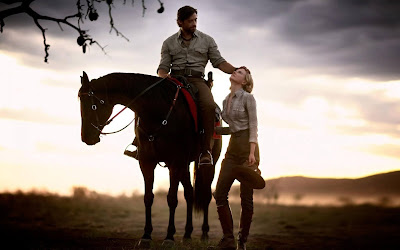 If you have any favorites--or any I should steer clear of--please let me know. My Netflix queue needs updating.

And that's that. Be safe, keep writing, and help me pray for an early spring. See you in two weeks.