by Eve Fisher
Right before the 2008 election, I was present when a Southern father told his sons to go out and buy guns, right now, because if Obama got elected, there would be black people (my terminology, not his) banging down their doors to "get them". It didn't happen. Then or in 2012. I'm sure it's been a great disappointment to him ever since. And I'm sure he continues to hope.

I thought of him the other day when I read a comment on a conservative web site - and I quote:

"Whites, Traditionalists, Conservatives and small o Orthodox Christian's are being treated by the mob the same way the Nazis treated the jews in Nazi Germany, it only a matter of time they throw us in gas chambers."

And I almost felt sorry for the guy. Really. Because I could tell that deep down the commentator wants - no, NEEDS this to happen. Well, probably not to him: but to somebody, to prove how evil the other side is, and how important and righteous he and his must be, to be so savagely persecuted.

As Fred Clark, one of my favorite bloggers, wrote "You probably don’t hope that millions of your neighbors are secretly cannibalistic pedophiles who worship Satan. Because that would be bad. But some people really want that to be true."

In case you're wondering, the existence of a large number of cannibalistic pedophiles who worship Satan is one of the central tenets of the QAnon conspiracy theory, and this came up because it's being professed by a number of GOP candidates for public office. (See NPR)

Anyway, back to Fred as to why people believe this stuff:

"If it’s not real, after all, then where will the true believers find anything else so exciting to provide meaning for their lives? If there isn’t a massive secret global network of Satan-worshipping cannibalistic pedophiles, then what’s even the point of anything? They hope that it is real. They want it to be real. They desperately need it to be real...

"But there’s the problem. Once you’ve given yourself over to a pack of lies like QAnon or any other variation of the ancient Satanic baby-killers libel, you belong to those lies. You become those lies. And having become a lie, sincerity and genuineness are no longer available to you. To be a true believer in such outrageous lies makes you incapable of truly believing. So do even the “true believers” really believe this stuff? Not quite, because they can no longer “really” anything.

"I think this also captures what it is that those Second Amendment cultists Boebert feeds at her restaurant “really believe” about all of their delirious fantasies about persecution and confiscation and imminent tyranny precariously kept at bay only by their sidearms pew-pew-pew! You can’t “really believe” such fantasies when you’re sitting there at Shooter’s Grill, eating your Swiss & Wesson burger imperturbed by the evil forces of gubmint tyranny. But you can hope that it is real, because that would be exciting and thrilling and it would mean that you mean something no matter how much you’ve begun to suspect that you don’t." (Slacktivist: "I hope that this is real") (my emphasis)

To put it more simply, as Toby Keith wrote, "Let's Get Drunk and Be Somebody."

This, my friends, is why people join cults and/or believe in conspiracy theories (although all cults are founded on conspiracy theories, imho), and why it's so damned hard to get them out of them. They let people, who believe deep down that they're nothing, be somebody important enough to be wanted. Even if it is only by the law.

One of the many reasons I love Spike Lee's BlacKKKlansman is the KKK guys. Felix, Walter, and Ivanhoe are true believers in the "Lost Cause", "whites are more persecuted than anyone else", "they're comin' after us!" fantasy that apparently started right after Lee's surrender at Appomattox. In between drinks, they blab, shoot pool, whine, shoot guns, and plan to blow up a dorm of black women for being mouthy and black. They think they're mysterious and powerful and deeply important, but in reality, like Sally Bowles, they're about "as fatale as an after dinner mint." (Or, in their case, a Tic Tac.) But they are, also like Sally, dangerous to themselves and to others.

There really was a time when people didn't seem to need to find meaning in cults and conspiracy theories or much of anything because they were engaged in an existential struggle to stay alive for another year. Or month. Or day. Some of it was that a 95% preindustrial agricultural society has too much work to do to stay up late at night wondering if the Illuminati are real. And they knew they were important - they had families to take care of, crops to raise, clothing to make, food to cook, etc. For that matter, Ma and Pa Ingalls weren't sitting around DeSmet, South Dakota, discussing how many people in President Grover Cleveland's cabinet were Reptilians. 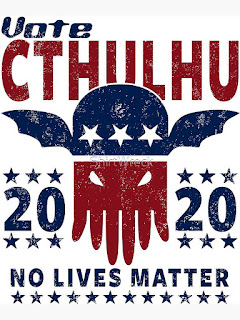 BTW - the puzzling thing about Jim Jones, Cthulhu, and other death cults is that in the long run all they offer their cult-members is a quicker death than the rest of the world, and that apparently is enough. (Head shaking emoji.)

But most cults offer a constant frisson of fear, anxiety, apprehension, but with

Another aspect of cults / conspiracy theories, etc., is, of course, that they aren't always religious. They can be political, dietary, economic - whatever takes you away from the present and wafts you to an often earthly paradise, like the Marxist "dictatorship of the proletariat." (Stalin, Pol Pot, and Mao should have put the kibosh on that dream.)
Or the idea that if you just cut your calorie intake low enough, you will live hundreds of years. (But who wants to live hungry forever?)
Or high colonics (if you haven't seen it, go out and rent, right now, The Road to Wellville, and find out how much of a crackpot John Harvey Kellogg really was). (Oh, and bicycle smiles, everyone!) 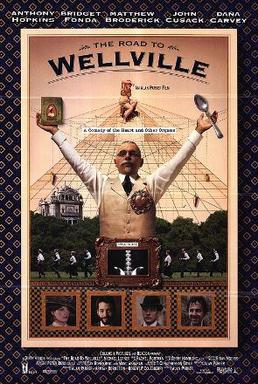 Here in America the primary economic cult is a combination of
Which is why, in the middle of battling a pandemic with no cure, treatment, or vaccine, and statistics like these staring us in the face:

the current message from many politicians and pundits is "We must save The Economy at all costs!"

Back to work, back to school, and rewrite the CDC guidelines to match the need to get everyone back to work. And if it costs some lives (the old, weak, disabled, and now children), well, you have to break a few eggs to make an omelet, and they were probably gonna die anyway, but now they'll have died in a good cause. For the good of The Economy.
And the survivors are going to live in a booming economic paradise! It'll all be worth it! You'll see.

**From WJB and Will Rogers:

"There are two ideas of government. There are those who believe that if you just legislate to make the well-to-do prosperous, that their prosperity will leak through on those below. The Democratic idea has been that if you legislate to make the masses prosperous their prosperity will find its way up and through every class that rests upon it." - William Jennings Bryan, "Cross of Gold" speech, 1896

"This election was lost four and six years ago, not this year. They didn’t start thinking of the old common fellow till just as they started out on the election tour. The money was all appropriated for the top in the hopes that it would trickle down to the needy. Mr. Hoover was an engineer. He knew that water trickles down. Put it uphill and let it go and it will reach the driest little spot. But he didn’t know that money trickled up. Give it to the people at the bottom and the people at the top will have it before night, anyhow. But it will at least have passed through the poor fellow's hands. They saved the big banks, but the little ones went up the flue." - Will Rogers, 1932

MY NOTE: Now this is an idea that really should be drowned in a bathtub. Hasn't worked almost 100 years, and it's still being proclaimed as if it's the magic cure to everything.