When Extroverts Must Stay Home

Sometimes current events coincide with stories you've already written. This is one of those times.

A friend asked me this morning how I was dealing with the coronavirus pandemic. I said that since I work from home, I don't go out much anyway. Consequently, self-quarantining so that I don't inadvertently catch this newest strain of the virus and pass it on to someone with a compromised immune system is not a big problem for me. As the joke goes, I'm an introvert, so I've been preparing for this moment my whole life.

I've seen increased focus in the media and social media over the past decade on us introverts. How we do better working solo than in groups, how we need alone time to recharge, how the world is often so oriented toward extroverts that we introverts sometimes are penalized for not excelling at activities geared toward extroverts. I'm grateful for this focus on introverts, which hopefully has helped open some people's eyes.

We don't usually see people worried about extroverts because much of society is geared toward them. Until now, that is, now that people are being asked to self-quarantine the best they can to slow the spread of the coronavirus. I've seen people post on social media that they don't want to self-quarantine because spending more than a day or two at home makes them anxious, that they need to go out and be among people. If not, they get depressed.

Depression is no little thing. It can affect your emotional and physical health. As someone who understands how the need to be alone can suddenly feel urgent and overwhelming, I get how being cooped up might affect someone who needs to regularly be among people, especially someone who doesn't have family or roommates to spend time with at home. It's something I was thinking about last year as I wrote a story called "Man to Man," whose main character is an extrovert who becomes socially isolated. 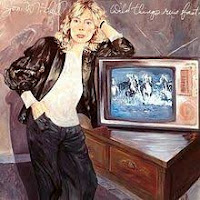 This story is coming out in a new anthology, The Beat of Black Wings: Crime Fiction Inspired by the Songs of Joni Mitchell, which will be published on April 7th by Untreed Reads. The anthology, edited by Josh Pachter, has all of Joni Mitchell's albums represented. My "Man to Man" story is inspired by the song of the same title from her 1982 album, Wild Things Run Fast.

In my story, my main character, Cecelia, ends up effectively self-quarantined at home. She's not physically ill, and there's no virus at play, but Cecelia is cut off from her social network. So she starts staying home, which makes her depressed. Her lack of connection with others makes her depression grow, and her negative feelings spiral, especially regarding her husband, the only person she sees anymore. It doesn't help that Cecelia is spoiled and self-centered. Here she is, thinking about her situation:

"I had nothing happening in my life. No social groups. No events. No trips I was planning. I could barely pay attention to what was on television. No one ever called me, and I had no one to call.

"It felt like I was in solitary confinement. Sure, I was in an upscale high-rise, but the isolation was overwhelming. And things didn't get better when David came home at night. He made me so angry sometimes, I wanted to scream."

Before I wrote the story I'd been thinking that the world is largely geared to extroverts, so I could understand that if an introvert couldn't get alone time, it might make her feel edgy and unhappy and might result in her acting out. (Not excusing bad behavior, just understanding what might prompt it.) Then I started thinking about the other side of the coin. What if an extrovert lost all her outings and interactions, the things that energized her and made her who she is? How might she react? I thought this would be an interesting approach to a character. That's how Cecelia came to be.

I never imagined that my scenario might be playing out all over the world around the time the story was being published. I hope all the Cecelias out there can safely resume their regular lives soon. In the meanwhile, for all of you looking for something to do while stuck inside, you can pre-order The Beat of Black Wings. It will be coming out April 7th in e-book, trade paperback, and hardcover. Pre-ordering of the paper versions is only available from the publisher. You can do it by clicking here. Pre-order of the e-book version is available in the usual places. One-third of the royalties will be donated to the Brain Aneurysm Foundation in Joni Mitchell's name, which means you can get a fine book of short stories for you and help a good cause at the same time.

So are you under self-quarantine? If so, how are you spending your time? And to my fellow authors with stories in the book, please tell us about your stories.
Posted by Barb Goffman at 00:00