Little Plague on the Prairie:
The 1918-19 Diary of Anna Eneboe


She was the great aunt of my dear friend Allyson Giles Nagel, who graciously gave me permission to use Anna's writing. The diary is very short, very simple, very spare, written in a small red notebook that's pretty worn after all these years. Anna was 19 years old in 1918, unmarried, and treasurer of the local Independence Red Cross (organized June 13, 1918). Some of the people mentioned in the diary are her older brothers, Henry (called Hank) and Rudolph (called Rud), her two adopted sisters, Lillian (called Lillie) and Agnes, her parents, and her future husband, Bernt Nerland. The family all lived on a farm outside Pierpont, SD, up in Day County, in northwestern South Dakota. Today its population is 135, back then somewhere between 314-400 (the census of 1910 and 1920 respectively). I've guestimated it to be around 380 in 1918.

Now, before we get started reading excerpts from the diary, you need to remember that the Spanish Flu roared through the United States three times. The first was in the spring of 1918. It was fairly mild and it disappeared for the summer. People believed that it was over. And then with the fall, came the flu, and October - when this diary begins - was the deadliest month of all. 195,000 Americans died that month from the Spanish Influenza.

Victims died within hours or days of developing symptoms, their skin turning blue and their lungs filling with fluid that caused them to suffocate. There was no treatment, no vaccine, no cure. Thanks to WW1 (BTW – the Spanish flu killed more soldiers than died in battle in WW1), there was also a shortage of doctors and nurses back home. And no one, no place was immune. Even President Woodrow Wilson got it in early 1919 while negotiating the Treaty of Versailles in Europe. (Link)

It's hard not to believe that it was the Spanish Flu's return in October, 1918 that got Anna to writing things down. Not that she knew it, but that month was the peak – but not the end – of the pestilence. But she was well aware that men were coming home from the war, some of them sick, some of them dying. That people all around her were sick, dying, but also marrying and giving birth. And that's what she writes about.

Oct. 14th – Hans Oswood seriously ill at Camp Funston of the Fluenza.
Oct. 15th – Alfred Nelson gassed in France in August and has been at the hospital since.
Emil Sanders sick of the Fluenza in Camp Dodge.
School closed in Pierpont Oct. 14th on account of the Flu.
Dr. Murphy sick of the Flu.
Mrs. Eddie Kamestad died in the evening Oct. 14th.
Luther Hofstad wounded severely in France Oct. 14th.
Edwin Ronshaugen died in Camp Funston of the Flu., Oct. 14th.
Kristian Mjolsness was married to Lina Likus Oct. 18th.
Anna Rindahl was married to Mr. Jensen November 3rd.
Mr. and Mrs. Monk Osby are the proud parents of a baby boy, born Oct. 3rd.
Rudolph Baukol lost in action [in pencil].
Magnus Brindenuven died of wounds received in France.
Oscar Nymauen died of the Fluenza in Camp grand.


My Note: "On Oct. 16, 1918, the South Dakota State Board of Health ordered everything closed: Schools, houses of amusement, sporting events, speeches, everything. The order was enforced by police and the Home Guard, a quasi-military force that patrolled cities looking for violations." (Argus Leader)

Mathilda Hanson was married to Mr. Olson
Howard and Marie spent Xmas with us.
A cablegram from the battlefields of France last week Thursday, conveyed the heartbreaking news of the first sacrifice made by one who spent his childhood days in Farmington, and lived here in the adjoined vicinity on the north, the greater part of his life.

Henry O. Osness in company with his brother Chester departed from Langford April 26, 1918, with the Marshall County soldier boys of that date, who were sent to Camp Funston, Kansas.


A sorrowful group of half-sisters and brothers mourn his loss, also a number of other relatives.
He is survived by his two sister, Misses Josephine and Anna, and by three brothers, Chester, his comrade, and Theodore and Selmer.
Three years ago, Henry enlisted in the navy, but was honorably discharged on account of physical disability. He appeared well and was of a happy, jolly disposition. The selective draft admitted him, and he went to death bravely fighting for his glorious country. “Over the top” was his motto, and t’was there he payed the supreme sacrifice.After only a brief time, they were called “over there” and on July 11th Henry gave his life nobly in this great crisis, which the United States was suddenly thrust into and from which nearly the entire world is so grandly, so nobly extricating itself. Henry was the son of Mr. and Mrs. Christian Osness and was born in Newport township, Marshall Co., June 10, 1889. The family resided in Farmington a number of years, during which the children were left orphans by the death of both parents.

O’er the sea there came a cable message from the battlefields of France.The golden star in their service flag appeals with honor and sadness to Henry’s countless friends here.

Henry was blown to pieces. Half of the body were all that they could find to bury. There’s a little white cross somewhere in France that now marks his grave.

Boyd Vikers and Christ Oswood return home from camp.
Charly Paulson has been home on furlough.
Meeting in Falness [Lutheran Church, Langford, SD] Jan. 19 – also to Y P.M. in the evening.
Mr. Knut Syvertson and Mrs. Dahl was married this month.
Was at John Enstad Sunday the 12th in the evening.

Lillie’s partner was Clarence, my partner was Emil Erickson – we had a very nice time talking and laughing. Played games and so on. Shook hands with Olaf Syre. Hobart Syre and Joseph Nygaard came home today.23rd – very nice weather, social in Hainess school house tonite. Quite a few there. The sum paid for Baskets $72.74.
28th – had our first trip in the Overland to Pierpoint. Sawsa Brandle’s a baby in January

My Note The Overland was a "runabout", and the Overland Automobile was produced from 1903-1926. Pa's new vehicle was probably Model 83:

My Summation: February was cold, snowy, with more running about in the Overland. Alma Asdland died on the 10th and was buried on the 13th, which means the ground wasn't frozen solid. (Not always true in a South Dakota February.) There were meetings, cleaning, crocheting, and an oyster supper, along with one day when it was warm enough to play croquet, and more days when it was bitter cold with snow.

1st – Sat. – Enstad’s – washed the floors and baked was what Hattie did, and I tried to help her along. Snap’d our pictures.
2nd – Sun. – kind of nice today. Rudolph came over after dinner. We made up a poem. In the evening we were discussing different things. Told our fortunes, and had a little lunch. Rudolph stayed over night. (In pencil on the side, Mrs. Ole Enstad died this morning.)
3rd – Mon. – very mild and nice this morning. Rudolph went to Lee’s and then he came back for me. We had a Dakota blizzard going home.
4th – Tue. – Mr. and Mrs. Carl Sampson a boy. Cold, but clear. Have not been doing very much. 5th – Wed. – washing clothes today, nicer weather.
6th – Thurs. – Ironed. Jennie baked cookies, I washed upstairs.
8th – Sat. – Doing the Sat. work in the forenoon and in the afternoon we four girls went to Bakke’s but only Selmer at home. In the evening, Julian and Hattie came over.7th – Fri. – Washed the floors. In the afternoon we went to town. Talked to Chris L. Oswood. Myrtle & Lillie went with us home.

And then it's done - the Spanish Influenza is over.


On Thursday, May 22nd, Anna and the family went "to Pierpont, had a reception there for the soldiers. First time I seen Chester in uniform. The soldiers were seated on the stage. Had Annie Sparks duet and a quartet. Drawed number on a Red Cross quilt and Chester won it. had ice cream and cake. Only one vacant chair and that was Henry Osness." (Whose death, as you'll remember, Anna recorded in the first part of her diary.)
23rd – Fri. – Lillie and I have been home alone today. The folks been in town. In the evening we went to Pierpoint to take in “The Birth of a Nation”.


My Note: Anna mentions 14 cases of the flu, 6 of them in October, 3 in November-December, and 5 in March. In the whole diary, 12 people die - 3 in October, 3 in Nov-Dec., and the rest in Jan, March, May, two at least of whom died of the flu. Not a lot, right? But in a community of 380 people, where everyone knows everyone else and has since they were born, that's a lot.

Six cases of flu in October, including the doctor, would have frightened everyone. The whole family coming down with the flu in March would have everyone scared.

And those 12 people dead - they would leave a hole in the community, from the newborn to the soldiers who never came back. Small towns are tight-knit, and memories are long. Weddings and funerals, births and deaths, all get talked about for years, if not generations. The proof is that we know the rest of Anna's story, because it's still being talked about, in Allyson's family, and now here. Anna continued to live on the farm until she was married. She was an older bride: she and Bernt were married in 1931, when she was 32.

But marriage isn't the end of the story, no matter how happy it was. And while I wish her story had a happier ending, it doesn't: Anna died in 1933, in childbirth, at the age of 34. As you can see from the photo of her in the casket, she was buried in her wedding dress, a custom of the time. The baby died as well. 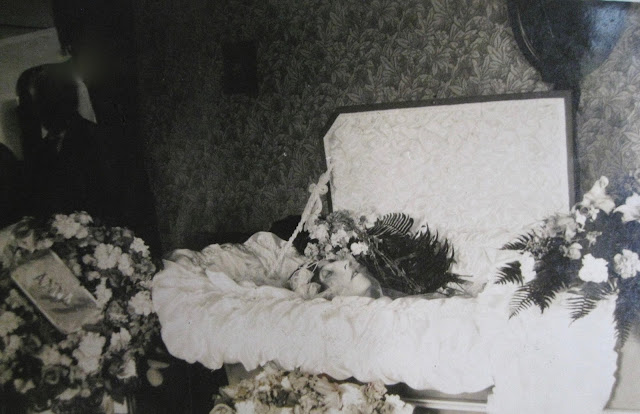 Written On The Back Fly-Leaves of her Diary:

Could we but draw back the curtains that surround each other’s lives, see the naked heart and spirit. Know what spur the action gives. Often we would find it better, purer then we judge we should, we should love each other better. If we only understood.

I’m getting tired of dreaming. Dreaming of you all day. I’m getting tired of sceming [sic]. Hope I shall get you some day.
I envy the dimples that hide and go seek, and play with the roses that bloom on your cheek.
Our eyes have met.
Our lips not yet
But O you kid

I’ll get you yet

Smile, and the world smiles with you.
Weep, and you weep alone.

PPS - Other sources for information of the 1918 Spanish Influenza Pandemic in South Dakota include these article: