by Leigh Lundin
Recent SleuthSayers posts have taken a autobiographical turn. I don’t have any new great anecdotes, but I was talking with Haboob about early childhood recollection.

Early memories vary considerably. Ray Bradbury said he could recall his moment of birth and pretty much everything since. Another friend says she remembers almost nothing before the age of ten or twelve.

My memory falls in between, mostly significant events that rocked my infant world. I recall my first step, probably because of my parents’ fuss. Contrary to vicious rumors, that occurred well before my teen years when repairs necessitated exiting my beloved car. 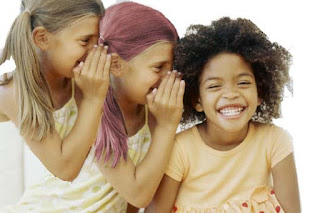 Long ago on Criminal Brief, I wrote about getting into trouble, mainly by being a good student. Weird, huh. I mean me.

Perhaps the most telling of those anecdotes occurred in the first grade. Miss Ruth, a fixture when my mother attended school, trotted us down to the gym. She sat us on the floor arranged in an alphabetical line. She explained how rumors couldn’t be trusted. We’d discover this, she said, playing a game of Telephone.

As a reader, you know Telephone: Into Amber Abelard’s ear, she’d whisper a story, who’d whisper it to Becky Bart, seated next to her. At the end of the line, Walter Younger would relate the story as he heard it. The teacher would then compare it to the original, lesson learnt.

Except… Even in the first grade, there was something of an investigator or junior scientist in me. (Adults usually called it other names.) Alphabetically, I sat dead center in the row of little whisperers. When it was my turn and the story about a cuddly bunny’s bicycle reached my ear, I realized I could run a double experiment. I whispered to the girl next to me my own fabrication about an ice skating duck.

After the words left my lips, I panicked. Miss Ruth was bound to investigate who’d sabotaged her tale. Our teachers believed in corporal punishment. They believed in capital punishment. I was done for, my life over barely into the first grade.

Walter duly stood and story-forthed the legend of a duck on roller skates.

The expression on Miss Ruth’s face… I can’t describe the despondency, somewhere between gaping and gasping.

Her hundred forty nine years of teaching (Did I mention she’d taught my mother?) fled before her eyes. Surely she wondered where she’d gone wrong. What had the Good Lord inflicted upon her?

She never finished the lesson, but packed it in for the day.

I had sold my first story.

In retrospect, my weirdest early memory was the irrefutable evidence grownups lied to children. Nope, not like most kids. My parents didn’t believe in misleading toddlers about St Nicholas aka Father Christmas, the Easter Bunny, or the Tooth Fairy. Instead, they adopted sort of a conspiratorial approach, said many parents deceived their kids about Santa Claus, winked, and told us the truth. We fully enjoyed Christmas without the obfuscation. It puzzles me today when outraged parents scream when someone pulls aside the curtain of truth.

Nope, my parents played holiday games and the Tooth Fairy, but always let us know it was a game of make-believe.

But still, I knew adults lied. Specifically about growing up. I didn’t believe kids grew bigger or adults had ever been small. I need look no further than myself. On a remote farm, there were no other children to compare.

Childhood time moved so slowly, I never appeared to grow bigger. My next birthday seemed impossibly far off and anyway, birthdays were just numbers the people who controlled the world made up.

Obviously, getting bigger was an illusion promulgated by dishonest adults. Clothes shrank so how could a child judge whether he was growing bigger or clothes were getting smaller?

Old photos of grownups supposedly as children weren’t proof, all grainy and unrecognizable. They were just snapshots of other kids lost in the distant past.

Moreever, I knew things. I was raised amid farms and forests. Baby animals grew up in a matter of weeks or at most, months– mice, rabbits, chicks, and puppies. In less than a year, a calf would grow into a heifer or young bull. I didn’t grow at all during those weeks and months.

Who were they kidding? I’d exposed a dastardly plot to subjugate children and prevent them asking too many questions.

Without realizing the creeping evidence, I gradually became subverted. Or perhaps the adult nightly brain-washers laundered my thoughts.

But I was right about one thing. I never grew up.
Posted by Leigh Lundin at 00:05