Shot By Your Partner, Part Two 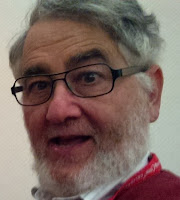 I published the first half of this story on Wednesday.   Better start there or you won't have any idea what's going on.

Here is the big finale...


The widow agreed to talk to them, against Wyngood’s adamant objections, but she insisted that Forillo had to be present too.

“There must be some mistake.”

“You figure this was somebody else’s death card that your husband just happened to tuck into his safe? Have you and Mr. Forillo killed other people?”

“Did you ever see his death card?’

The assistant shook his head. He hadn’t said a word since the safe had opened.

“But you knew he was supposed to died in a fall,” said Staney.

“And where were you when your employer died?”

“We already told you. Ms. Duplessis and I were in one of the anterooms on the other side of the hall, finishing the paperwork.”

“That’s what you said,” agreed Merritt. “Funny thing is the techs didn’t find any sheets of paper in that room. They did find a bed sheet in the closet. Apparently it had been on the couch and there were bodily fluids on it. We’ve got a court order to see if the fluids belonged to you and Ms. Duplessis.”

“We’re in love,” he said. “Her husband was a viscious old bastard, but we didn’t kill him.”

Wyngood said “If they were together there they obviously didn’t push someone down the staircase.”

“I don’t know how long they were spreading fluids,” said Merritt, “but we have a twenty minute hole for Mr. Duplessis to die. That’s plenty of time. Plus, Mr. Forillo found the body.”

“Speaking of fluids,” said Staney, “have you two used the death machine?”

“What’s that got to do with anything?” asked the lawyer.

“We’ve already got a court order for blood, counselor. The courts say we can run it through the death-box.”

“We’re sorry, ma’am,” said Staney. “But the question remains: If you didn’t kill him, how did your names get on that card?”

“Oh god,” said the widow. She buried her face in her hands. “Don’t you see what happened?”

“Arthur must have found out that we were having an affair. He killed himself out of jealousy. That’s what the death card meant.”

“That makes sense,” said Wyngood. “The machine meant he killed himself because of Talia and Sam.”

“Nice try,” said Merritt. “The problem is juries don’t like complicated stories. If the machine says shot by your uncle the jury is going to assume your Uncle Mike came with a gun, not that Uncle Sam came with a tank.”

“That makes no sense,” said Wyngood.

“Then try this. You’re both under arrest.”


“Machine-gunned by rebels.” Merritt was driving.


“Sex with beautiful twins on your ninetieth birthday.”

“Hah. You wish. Drowned in a butt of malmsey.”

“Smart kid. She must take after her mama.”

“Thank God for that.” Merritt pulled into a parking space.

Staney tapped his fingers on the plastic envelope that held the death card. “Give me a couple of minutes. I want to drop this at the lab.”

They decided to let Talia and Ed, as they called them now, stew in separate rooms at the station. After two hours they decided it was time.

“Knock yourself out,” said Staney and entered the widow’s room.

She looked like hell. Her eyes were red, her face was grim. “I’m not saying a word until Charlotte gets back. She’s arranging bail.”

“That’s fine, Ms. Duplessis. I don’t have a single question for you. I just want to tell you what’s going on. Detective Merritt is in the next room talking to your lover, who has not reached a lawyer yet. Merritt will tell him that there are two ways this can go. Either the jury is going to hear about the poor abused wife who was seduced by her husband’s evil assistant--”

“Let me finish. The other choice is that the jury will hear that the black widow talked the innocent young man into killing her hubby.”

He shrugged. “Whoever confesses first frames the story and gets the best deal. My partner is telling your partner that Ms. Wyngood will convince you to sell him out before his lawyer finds the precinct house.”

Talia banged her hands flat on the table. “But we didn’t do anything!

“The death machine says you did and no one has proved one wrong yet.”

“Ed is not going to betray me. I have faith in him.”

“The real question,” said Staney, “is whether he has faith in you.”


Wyngood came back, swearing about the evil incompetence of judges, none of whom apparently saw the wisdom of holding emergency bail hearings for wealthy murder suspects. The lovers were still holding out an hour later when the detectives stopped for a coffee break. Staney had just had a first sip when his phone buzzed. He read the ID and looked at his partner. “Back in a few.”

He hurried to the crime lab where Roma, the questioned document man, was waiting for him.

“Why this one?” Roma held up the envelope with the death card. “You see hundreds of these things a year. Why did you send this one to me?”

“First tell me what you found.”

“Not so fast. It’s time to quote Dr. Samuel Johnson.”

“Nope. He was an English dude who wrote dictionaries hundreds of years ago. But he also reviewed a book – not a dictionary – and he said ‘this is a good and original book, but the good parts are not original, and the original parts—”

“Are not good. I get it. But what does that have to do with the death card?”

Roma brandished the item again. “The card stock is used by all the Cassandroid machines. The ink and font are standard for the Mortellis Corporation.”

“So they shouldn’t be on the same card.”

“Bingo. This is the first serious forgery of a death card I ever saw. It took someone with access to good equipment.”

“How about a publisher who also owns art galleries?”


“About time you got back,” said Merritt. “Forillo’s lawyer says he’s ready to cop a deal. You’ll never guess, but it turns out it was the widow’s idea and he was practically an innocent bystander.”

“No deal on the deal,” said Staney. “Get him into Conference Room C. I’ll fetch the ladies.”

The widow was crying and her lawyer looked ready to commit grievous bodily harm on somebody.

“Your partner was just in here, gloating,” she said. “I don’t know what kind of lie you talked Mr. Torillo into—“

“Ms. Duplessis can walk out of here with a clean slate in half an hour,” said Staney. “Or you can lecture me. What’s your pleasure?”


Room C had a long table, but it wasn’t long enough for the former lovers, who wanted nothing to do with each other. They sat at opposite ends, refusing to look in each other’s directions.

Wyngood and Forillo’s lawyer – fresh from the bar exam, by the look of him – were at their clients’ sides. Merritt sat between like a referee.

Staney stood. “You were right about one thing, Ms. Duplessis. Your husband somehow discovered you two were having an affair. He decided to kill himself.”

“Out of jealousy?” asked Merritt.

“I imagine that was the last straw. Did you know he had MS?”

Talia’s eyes went wide. “The doctor’s office called once about a test for MS. He said it was a mistake.”

“We can check his medical records, but I think we’ll find that he did. He knew it wouldn’t kill him – I’m guessing his death card really did say he would die in a fall – but out of a desire for vengeance, he decided to frame you two for murder.”

Staney shook his head. “Breast cancer. Diabetes. Remember? He already knew how you were going to die.

“So he printed a false death card and killed himself where there would be plenty of people to notice that you two were conspicuously absent. I’m guessing he waited until he saw you sneak off to your hideaway. Then he headed for the staircase.”

“What about the blow to the head?” asked Merritt.

“Did it himself with his cane. One blow, hard enough to draw blood. Takes determination but he had enough hate in his heart for it, don't you think? Then the tumble down the stairs, which he had every reason to believe would be fatal.”

“With thanks for their cooperation.”

Ed stood up, moving toward the widow, arms outstretched.

Talia stepped back like had had rabies. “Don’t come near me, you – you – backstabber! You were ready to perjure me into prison!”

Ed stammered something. It didn’t do any good.

Everyone turned to him,

“Mr. Duplessis’s last wish was that you two would be miserable for the rest of your lives. Are you going to going to give him the satisfaction?”

Talia turned to Ed, who was ready and waiting.


“What made you think it was a frame?” Merritt asked. They were at their computers, closing up files.

“A matter of character, I guess. We were supposed to think Duplessis knew his wife and assistant were going to kill him, but that he didn’t tell them, or try to do anything about it.” Staney frowned. “From what we knew about the guy, I didn’t think he would go that route. Frankly, I don’t think most people could. I mean, knowing someone close to them was going to be the cause of their death and going on like nothing was wrong? That’s got to be hard as hell.”

“When was the last time you went to a domestic disturbance?”

“Okay, you’ve got a point. I admit that was a good piece of detective work. Just don’t get a swelled head over it. Hey! There’s your cause. Swelled head.”

“Nibbled to death by ducks.”