How to Lose a Country, or The Atlas Game

Sometimes it takes a while to catch on to what you're seeing.  I am a map freak.  I love them.  I have a few treasured old atlases, including one from 1918, which came with a pamphlet about the League of Nations tucked away in it.  I also have a world map shower curtain, with all the countries, their capitals, and the occasional other city or natural wonder on it.  It was made in China, so there are a lot of other Chinese cities and of course the Great Wall.  Take a look at it.  Of course there is no Tibet on it - God only knows when that got taken off of Chinese maps, and you won't find it on regular atlases as an independent nation anymore, either.  Sorry, Dalai Lama - China has absorbed it and has no intention of ever reversing the process.

But - something else is missing. 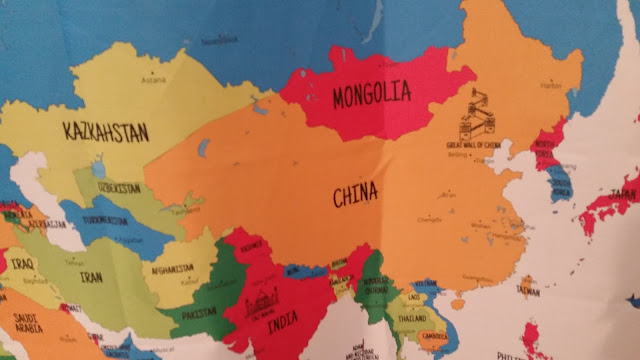 Apparently, they've been absorbed into China, too - they no longer exist, according to this Chinese world map.  Now, you might say, "Hey, it's a shower curtain.  They couldn't include everything."  No.  They've pretty much got everything else, including every country in Africa, even the tiniest ones.  So... makes me wonder, does China have plans?

Let's face facts:  maps are generally the heralds, and always the finales of war, whether waged through words or weapons.  Countries come and go all the time.  They are conquered, absorbed, enlarged, reduced, and sometimes break apart all on their own.   Remember Czechoslovakia?  Yugoslavia?

In Europe, the most notorious example of this is Poland, which was partitioned up between Russia, Austria and Prussia in 1772.  For the next 123 years, Poland and Lithuania pretty much ceased to exist as sovereign nations.  In 1898, a map of Europe was published in Poland that had no Poland on it.  (See Here)  Finally, in 1918, Poland returned as a country!.  In 1939, it was occupied by Germany, which divided it up with the Soviet Union.  The Soviet Union set up a People's Republic of Poland, under the U.S.S.R., from 1945-1989.  Poland, as a sovereign nation, returned in 1989, and is still here.  So far.

Notice its neighbors.  Putin has been indicating that Ukraine, Belarus, and Lithuania all still belong within the Russian embrace.  The map may change again...

And sometimes countries "just get left off" of maps.  New Zealand has a running quarrel with a number of atlases, which keep leaving them off.  Apparently many mapmakers (including one of New Zealand's own) don't find it that important, which is sad, considering that it's Middle Earth.  (Atlas Obscura)

We managed to find South Dakota without them when we moved here in 1990.  (AP)  And all three states got back in the next year.  I think.  Maybe I should go check.

We should probably also check for the Upper Peninsula, which also seems to get lost on atlases.  Oh, it may be there in the big USA map up front (see above), but is there always a detailed map of the UP?  Apparently not.  (NPR)  Which might lead some people to think that you just can't get there from here.  Wherever you are.  Especially if you're in South Dakota or Oklahoma.

Here's the history of Europe showing the borders and populations of each country in Europe, for every year since 400 BC:

Here's one for the Middle East from the dawn of time until the current day:

Here's the history of Africa:


And the shortest one of all, North America:


"All diplomacy is a continuation of war by other means."
- Zhou Enlai

And, apparently, cartography as well.