by John Floyd
As mentioned in two of my earlier posts at this blog, I'm not one to stray far from my comfort zone in my writing, and I also don't care much for New Year's resolutions, but--at the urging of my publisher, Joe Lee--I'm going to try at least one new thing in 2020. 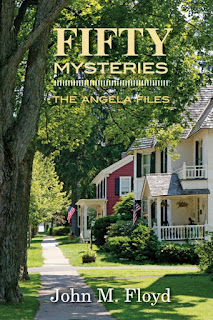 A quick background note: In the spring of 2006, it was Joe's idea (he owns and operates Dogwood Press here in Mississippi) to put thirty of my previously published short mysteries together in a hardcover collection called Rainbow's End and Other Stories. Thankfully, that book sold well enough for a second printing, and since then Joe's small, traditional press has published six more books of my stories--as well as the work of eight other writers. Another idea Joe had, back in 2015, was to veer away from my usual story-collections and produce a softcover book of fifty of my lighthearted tales with the mysteries in the front of the book and the solutions in the back. That project, called Fifty Mysteries (let's hear it for appropriate titles), was great fun to put together, and has sold well also. I think its success was due to (1) its "puzzle" format, (2) its humor, and (3) the fact that all of its stories feature two familiar characters from my longest-running series--all of which were reasons I thought it might not work. The point is, when Joe has a brainstorm, I listen.

So, what was this latest idea? To publish a book of my poetry.

You heard right. Over the past 25 years I've sold poems to more than 100 different markets, including Writer's Digest, Ellery Queen Mystery Magazine, Farm & Ranch Living, Mystery Time, Wordplay, Futures, Satire, Grit, The Lyric, Writers' Journal, Mobius, Murderous Intent Mystery Magazine, Capper's, The Mystery Review, and so on. But be aware . . . this is not the deep, profound, life-changing poetry you might find in prestigious literary journals. I'm not a contemporary poet and I noet. This is easygoing, humorous, Ogden Nash-style verse whose sole purpose is to put a smile on your face, and maybe even make you Laugh Out Loud and slap ya mama. The kind of thing that a lot of readers--and editors too, thank God--seem to like. (If you're at all interested, here's a SleuthSayers column I did about Nash and light verse, several years ago,)

The title of this unusual (ad)venture is called Lighten Up a Little, which is also the title of one of the included poems and might, I think, be good advice for all of us. The book will contain 300 lighthearted poems I've published in the aforementioned markets. Some are long (up to four pages) and many are short (as few as four lines), and all are an exercise in rhythm and rhyme and wordplay, because I love that sort of thing. As for subject matter, some of the poems are crime-based, but others cover everything from kids to sports to medicine to politics to movies to animals to technology to writing. The book is scheduled for April 2020.

Note: When the decision to publish was made and Joe and his wizards had started working on the layout, I sat down and drew a little cartoon I thought might work for the cover. I then scanned it and emailed it to my friend Chuck Galey, who's a professional illustrator, and asked him if he knew of any online coloring programs I might use to insert color into my dull-looking black-and-white drawing. Chuck responded by coloring it himself and sending it back to me. Boy, does it help to know the right people . . . 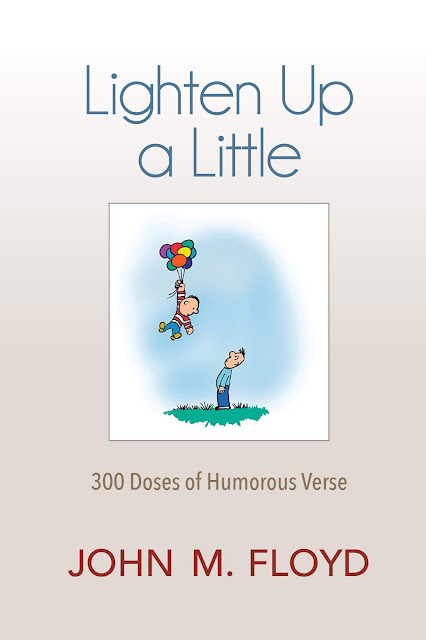 Here's an excerpt from my introduction:

"The following poems, grouped in a dozen categories of 25 each--and most of which are capsule-sized--may be ingested separately or in gulps of several at a time. They were designed to provide temporary relief from everyday stress and fatigue, but seem to also be effective in treating insomnia.

"To those who seek enlightenment, inspiration, and/or insights into the Meaning of Life . . . well, you might want to look elsewhere."

Which is true. No psychology or angst or navel-gazing here. Since I like movie comparisons, this is more of a Blazing Saddles than a 2001. And in case you're wondering what in the world I'm even talking about, here are a few really short examples of the contents:

The wife of Mean Willie LaBrock
Disappeared off the end of their dock;
Willie claimed that a gator
Just swam up and ate her
But that sounds to me like a croc.

Thought not legally blind, Nate was badly crosseyed
When he married Big Lucy, a mail-order bride;
"Get some glasses," friends urged, but he figured, well, hell,
It might not be too smart to see Lucy too well.

When Purpa's flights were smuggling grapes
Its king escaped in vain;
The Purpals found His Majesty
Aboard a fruited plane.

If the country of Yemen
Were governed by Britain,
Their gas would be petrol,
Their dresses tight-fittin'.
And sports fans could watch,
For the price of a ticket,
Arabian knights
Playing Yemeni cricket.

"Since I'm quite debonair, I don't travel by air,"
Leonard bragged, from the helm of his yacht;
A storm came the next day and blew Leonard away--
I don't know if they've found him or not.

When they're edited, writers have said
Semicolons are something they dread;
What if someone had stolen
One half of your colon
And plugged in a comma instead?

So there's a preview. If you're tired already, be forewarned: there are 293 more of these in the book. Some are silly, some are (I hope) witty, and some are just observations about people and places and situations in our workaday world. I doubt Maya Angelou or Robert Frost would've felt threatened by this masterpiece--but I can also tell you I had a great time writing it.