by Steve Liskow
Dennis Lehane is one of many successful crime writers who doesn't outline. He writes his novels on a legal pad (as did John Steinbeck) and types what he's produced into a computer at the end of the day (not like John Steinbeck). He says that when he gets stuck, rather than considering himself blocked, he knows he's made a wrong choice earlier in the manuscript and goes back through it to find what he did that shut down the action later on. When he finds the problem, he fixes it and surges ahead.

Many writers--lots of them practicing or formal journalists--point to the value of a regular deadline as motivation. The don't have time for writer's block and will produce on demand. I have written most of my life, but didn't sell my first story until I was 60. By then, I had several rejected novels and stories I could return to and play with if I couldn't find a "new" idea. Now that I've recycled most of those ideas that merited a second look, I find that I do get stuck sometimes.

Writer's Block actually comes in two versions. The one most non-writers mean is the lack of ideas to write about. Most of the writers I know agree that the people don't really lack ideas; they fail to recognize useful ones or set their sights too high. They have the seed of a good short story or poem, but they're looking for a blockbuster novel. Unfortunately, nobody, including publishers, can see these coming. Dan Brown wrote several mid-list novels before The Da Vinci Code caught his publisher and bookstores around the world by surprise.

The second version is the idea that doesn't work with your other ideas. Years ago, I interviewed several people to get the details right for what I thought would become the third Woody Guthrie novel...even though I hadn't sold the first one yet. Those notes sat on a floppy disc (remember those?) for several years until I thought the time was right. By then, the story had moved from Detroit to Connecticut and become a Zach Barnes story. Then it changed into a police procedural featuring Trash and Byrne. Six or seven years and several title changes later, I finally sat down to write.

Normally, when I write a first draft, I produce a scene or two daily, going faster as I get deeper into the book and know my way around better. My average scene is about 1600 words. Four weeks into this story, I only had about 50 pages, a quarter of my usual output, and none of it felt right. I put it away and tweaked a few other stories. When I came back, I saw something akin to Lehane's experience. 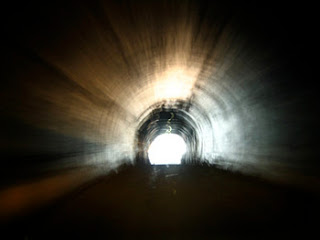 The story had two crucial premises that contradicted each other. Writer's Block, version 2.0.

The good news is that the time away also gave me a way to handle the problem. I recycled several of the characters, and the book turned into The Kids Are All Right, which was nominated for the Shamus Award for Best Indie Novel.

A few months later, I faced a similar situation. I was revising an early unsold Woody & Meg story from about 2004. A dozen years later, I understood why that premise didn't work and the book never sold, but I thought I'd learned enough to fix it.

After three days of pushing The Great Pyramid up a vertical slope, I finished page 4. 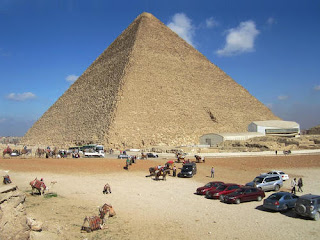 The notes, outline, character list, and pages went into seclusion on a flash drive. But, again, something else with a vaguely similar idea bubbled underneath. A week later, I recognized that bubble. I finished the first draft of a novella, 16,000 words in eight days. It became "Look What They've Done to My Song, Mom," which won the Black Orchid Novella Award.

Now I'm struggling with yet another idea that seems to be circling the drain.

I'm going to put it away for a few weeks...and hope history will repeat itself.
Posted by Steve Liskow at 10:00