The Pharaoh Akhenaten: Or How to Get Your Own People to Destroy Every Trace of You After You’re Gone


by DoolinDalton
Akhenaton: the criminal of Amarna. 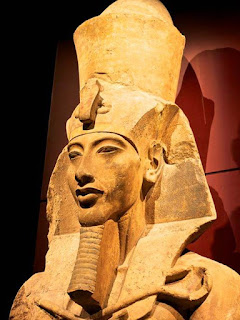 Akhenaten, the unexpected heir to the Egyptian throne, unsettled his people by glorifying one god instead of a pantheon. In return, they tried to pretend he never existed.

The “criminal of Amarna” didn’t start out as a criminal, or even as a pharaoh. Likely suffering from Marfan Syndrome, a disorder of the connective tissue (which would explain the elongated facial features and long, thin fingers on the statues of him that have come down to us extant), Akhenaten began life as a younger son of the great pharaoh Amunhotep III, whose rule lasted thirty-nine years, one of the most prosperous periods in Egyptian history.

Named Amunhotep (Ancient Egyptian for "Amun is pleased," a reference to the chief god of the Egyptian pantheon.) after his father, the young boy was probably initially intended for the priesthood. But when his elder brother suddenly died, young Amunhotep became heir to the throne, and succeeded his father in 1351 b.c. as Amunhotep IV.

For five years his reign was fairly conventional. Then in 1346 b.c., everything changed.
Amunhotep IV changed his named to “Akhenaten” (which means “The servant of the Aten”), stating that there were no other gods, that the Aten (the Sun itself, as opposed to the sun-god Re) was the sole holy being and that he himself, as pharaoh, was the Aten’s voice on earth. Then he shut down the temples of the other gods, declared their priesthoods dissolved and illegal, and made it clear how things were going to be in his new order: He would worship and serve his god, the Aten, and the people of Egypt would in turn worship and serve him. Akhenaten even cleared out of the capital city of Memphis, taking his family and royal retinue with him, founding a new capital city in the desert, about 200 miles south of present-day Cairo. The ancient name of the city, Akhetaten, means “horizon of the Aten” or “horizon of the Sun.” The city was later given the name “Amarna” by Bedouin tribes who settled nearby.

For the next decade, Akhenaten continued to suppress public worship of the old Egyptian gods ignored his neighbors, didn’t bother with diplomacy, and showed not the slightest interest in doing anything other than glorifying the Aten in his new capital out in the desert, out of touch with everything earthbound, a veritable hermit in the midst of his own people.


Modern-day American presidents have made much of the fact that they live in a “bubble,” insulated from contact with most of the people in their country, and talk about how they try to pierce that bubble, to be able to understand their people, in order to better serve as their leader. Not so Akhenaten. He embraced the “bubble,” and if anything, made it harder to pierce. Not a very bright move for someone trying to make a sweeping fundamental change to a religious system that had flourished in the Nile Valley for millennia.

In the end, it cost him his very identity as king of Egypt.

After Akhenaten died, the resurgent priests of Amun gained control of his 9 year-old son and heir Tutaknhaten. Through this boy king they set about dismantling Akhetaten's cult and undoing his life's work: his religious reforms. His erstwhile subjects went even further; rebelling against his very memory, smashing his idols, abandoning both his cult and his new city, returning to Memphis and to Thebes, and to the old gods and their temples. His very name was scratched out of every place in the country where it had been chiseled into stone, be it stele or monument.

A remark that serves as an effective, if unintentional, epitaph for this “rebel pharaoh.” Unsurprisingly in light of the revenge taken by the priests of Amun after his death, Akhenaten himself quickly faded from Egypt’s memory for millennia, as did his son.

That son ruled a mere nine years (and probably never without a regent looking over his shoulder) before dying under mysterious circumstances at age 18. After his sudden death he was buried in a hastily-finished, and quickly forgotten tomb among the much more resplendent and extensive tombs of dozens of other monarchs in Egypt's Valley of the Kings.

When Tutankhamun's tomb was discovered in 1922 (untouched since being sealed up over three thousand years earlier), this minor pharaoh was catapulted to posthumous fame, becoming arguably the most famous pharaoh of all time, based solely on the splendor of the items found in his previously unlooted tomb.

The irony of Akhenaten, a rebel at heart, languishing in obscurity while the son who (under duress or not) betrayed and undid everything his father believed became a household name throughout the world is a palpable one. One cannot help but wonder what the hard-headed religious zealot might have thought of it.

One of the rebel pharaoh's homilies is oddly insightful, without demonstrating any actual insight on his part at all: “True wisdom is less presuming than folly. The wise man doubteth often, and changeth his mind; the fool is obstinate, and doubteth not; he knoweth all things but his own ignorance.”

Maybe if he hadn't been so stiff-necked and dead certain about his "one true faith," it's possible the man once known as "Amunhotep IV" might have been better known than his short-lived, largely inconsequential son.
Posted by DoolinDalton at 00:20