by David Edgerley Gates
Some of you may know that the Brit writer Mark Billingham started out in comedy, and he once remarked there were a lot of similarities between doing stand-up and writing thrillers. Namely, setting up punchlines. E.g., "The pope, the Dalai Lama, and a stripper walk into a bar." I don't know where it's going, but it catches your attention. Jokes, of course, depend on the reversal of expectations, and setting a trap in writing is much the same. Sometimes the punchline gets left out, all the more effectively. The ending of Pet Sematary. You're not turning around.

The twist ending is a time-honored tradition. I got thinking, on the other hand, about twist openings. I just watched Night Train to Munich again, which is a terrific Carol Reed picture from 1940. The set-up is almost completely self-contained, a story all by itself, and Rex Harrison doesn't even show up until 20 minutes in. Not long after, the movie takes a sharp left-hand turn into the Twilight Zone. It's not what you were expecting.

I realized, watching it this time around, that Night Train to Munich puts me in mind of certain of John LeCarre's novels, The Little Drummer Girl in particular. The beginning, the set-up, "Sooner or later, they say in the trade, a man will sign his name," is itself masterful, and then he seems to wander off the beam, into some other story entirely. You're like, Wait, What, Where Are We? He's actually got absolute control, he's simply gathering the reins. Little Drummer Girl is about a deception operation, and the book is an illustration of method, a metafiction.

Metafictions can be said to call attention to themselves. Sometimes it's sleight of hand, sometimes it's done in plain sight. There's a Dutch Leonard book called The Hunted - some years before La Brava made him a household name - and it starts out with a guy in Witness Protection, who's been relocated to Israel, but the mob tracks him down and puts a hit on him. So far, so good. Then maybe a third of the way in, the story goes off at a right angle and all of a sudden, it's not about that guy at all, it's about this other guy, somebody you thought was a supporting character. Well, okay, it's Elmore Leonard, but hello? 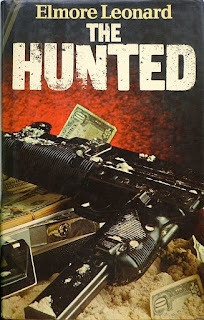 For my money, The Charm School is still Nelson DeMille's best book, not least because he takes what I think is a false and discredited premise and sells it, utterly. Not just that I suspended my disbelief, but that he had me totally convinced. Whether or not the spell wears off is of no consequence; he owns it, and you sign on. Here's the thing. Nelson pulls the same damn trick Dutch does. He starts off in one direction, and puts the pedal to the floor. We got ignition. Then he takes a curve at speed, and snaps your head around. He's got this guy who's only a walk-on, so you think, and suddenly he's center stage. 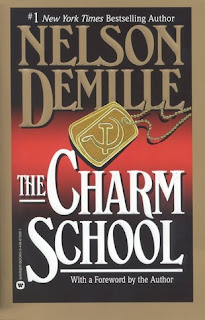 I don't think this is all that common a narrative device. At least, I haven't run across it that often. David Copperfield begins, famously, with "Whether I shall turn out to be the hero of my own life, or whether that station will be held by anybody else - " but we don't imagine Dickens is going to give Steerforth the lead. Likewise with Scott, no stranger to conventional theatrics, the hero of Old Mortality is your usual generic ingenue, and Scott quite happily loses control of his story to the two contending heavies, Lord Claverhouse and the Covenanter assassin Burley, who basically walks off with the book, but in the end, convention wins out.

Then there's the thing where you shift gears without even meaning to, or because the story requires it. In the first of the bounty hunter stories, for instance, I started out in one direction and veered off unexpectedly in another. I never intended it to be the beginning of a series, the guy himself seemed accidental, I thought I was channeling The Wild Bunch, and it turned out to be Have Gun, Will Travel. Not that I'm complaining, mind, but it took me by surprise.

I think this is where I'm going with this. That we should anticipate the unexpected. In anybody's narrative, but particularly our own. You follow the scent, you follow the story where it leads you, convention be damned.

Oh, and the punchline? "Mustard, custard, and you, you big shit."

Speaking of switcheroos and strange directions, there's another "Old Mortality", a novella by Katherine Anne Porter, which starts off with the narrator being the center, and then switches (on and off) to Aunt Amy, long dead - but from what? It's not officially a mystery, but I defy anyone to read it and not try to figure out what really happened.

Great post here! In Benjamin Percy's new (recent at least) craft book Thrill Me he has a chapter on reversals—taking a slightly different angle, but still with a lot of resonance with what you're talking about here. Love these reflections and perspectives!

Copperfield's opening reminded me of Robertson Davies' FIFTH BUSINESS, a quasi-mystery novel. The title refers to the fact that in Scandanavian opera there are four major roles and everyone else is "fifth business." The point is that the narrator says he is NOT the main character of his life...

Once again, I have a lot of reading to do. I just tried Netflix for Night Train, no luck, but learned Carol Reed directed, which I missed first time around.