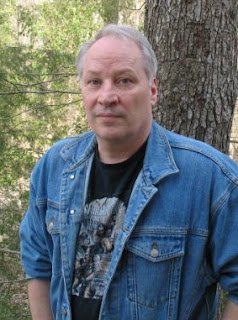 Have you ever discovered an author whose novels and stories you like so much you want to find and read everything he or she has written? I've found a few. Looking at the bookshelves in my home office, I can see just about every published piece of fiction by Carl Hiaasen, Lee Child, Harlan Coben, Michael Crichton, Nevada Barr, Larry McMurtry, Nelson DeMille, Greg Iles, Thomas Harris, Stephen King, Arthur Hailey, Martin Cruz Smith, James Michener, John Grisham, and Ken Follett--and I have almost everything written by several others: Robert B. Parker, Colleen McCullough, John Sandford, Fredric Brown, Tom Clancy, Janet Evanovich, Dick Francis, Tom Wolfe, Dennis Lehane, Elmore Leonard, Frederick Forsyth, Lawrence Block, Scott Turow, and . . . Joe R. Lansdale.

I wrote a post about Joe Lansdale here at SleuthSayers four years ago, called "East Texas Tales," and talked about some of his books that I especially enjoyed. At the time I posted that column, though, I had not yet read most of the novels in his Hap and Leonard series, I had not yet seen any of the movie/TV adaptations of his work, and I had not yet met Lansdale himself. I've now done all three of those things, and my respect for him has continued to grow.

I can't remember where I first heard that term, but I recently found a blog called Pulpwood Fiction, and it defines PWF as "good old-fashioned noirish pulp fiction with a Southern twist." I think that's a good summary of the kind of stories Joe Lansdale writes. Most of his tales are set in rural eastern Texas, in and around the fictional town of LaBorde. My absolute favorite novels of his are standalones like The Bottoms (an Edgar Award winner), Edge of Dark Water, and The Thicket, but I also love his series of novels featuring Hap Collins and Leonard Pine, two of the toughest and most interesting characters in modern crime fiction. 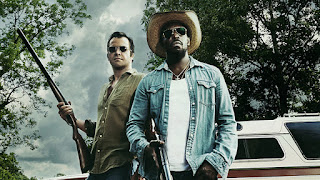 Without going into great detail, let me just say that Hap is a white, straight, liberal redneck who doesn't like violence and Leonard is a gay black Republican war veteran who doesn't like much of anything except Dr Pepper and vanilla cookies. These two have been best friends since childhood, and despite their mostly-good intentions and Hap's dislike of firearms they regularly wind up in deep trouble and have to shoot their way out.

So far, two feature films have been made from Lansdale's writing: Bubba Ho-Tep (2002) with Bruce Campbell and Ossie Davis and Cold in July (2014) with Michael C. Hall, Sam Shepard, and Don Johnson. Both movies are worth watching--and Bubba Ho-Tep is hilarious. There's also a Sundance TV series called Hap and Leonard, starring James Purefoy and Michael Kenneth Williams. I've watched two of the three seasons of H&L and I'm about to start the third. Like his words on the page, Lansdale's movies and TV episodes are smart, funny, and action-packed. 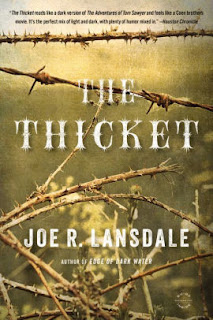 I've left out a few items, but the ones listed above I can vouch for because I've read them and I have them lined up right here on my (groaning) shelves.

Coming up soon: the movie version of The Thicket, to be directed by Elliott Lester and starring Peter Dinklage.