The Unbearable Rightness of Thinking

Which was where the whittling stopped, and this began.

If you want a soundtrack for that GIF, cue up the appropriate music and read on in your best William Shatner voice.

You'll be happy to know that the slap-a-thon is over now. (Well, unless you really, really dislike me. In which case all I can do is assure that I'll go through it again and again as long as I keep writing, so just be patient.) One of the slaps finally won out, and I've committed to an idea. Which means the GIF that captures the mode I'm in now looks more like this:

The soundtrack this time, of course:

I put in at least a month of Think think think every time I start a book.

What is this thing gonna be about? I think.

Who is it gonna be about? I think.

How am I gonna make it surprising? I think.

Where do I start? I think.

How does it end? I think.

Have I put in enough time thinking to justify a Facebook break? I think.

That cat is hilarious! I think.

Alright, back to work, I think.

"It's good," says one panelist.

"It's delicious," says a third.

"It's disgusting," says a fourth.

Etc. etc. etc. until the moderator announces that it's time for questions from the audience, the first of which is "What kind of crazy person puts pineapple on pizza?"

Me, I like pineapple on pizza. I also outline. But I'm not going to tell anyone that Hawaiian pizza is the best in the world or that a good book requires a plan.

I will do something dangerous here, though. I will express an opinion on the internet. My Twitter pal Jason Heller dared to do that recently, and hoo boy it did not go well. But here goes anyway.

I read a bad book recently. It was bad just about any way you could figure it. Line by line, chapter by chapter, act by act. (Actually, there were no discernible acts, no real building of tension, no climax that brought conflicts and themes to a head. You could tell where the chapters started and stopped thanks to the big numerals, but without those it might have been tough.) This I knew for a certainty as I gritted my teeth and flipped the pages: Here was a writer who didn't think about his book. He just wrote it. And when the bad guys were all dead, he figured it was done.

I'm not saying the book was bad because the dude didn't outline. I'm saying it might have been good if he'd outlined or revised the bejesus out of it. He needed to think think think, in other words, and that could have come before he wrote the first draft (my preference) or after (yours, perhaps?).

I did finish the book, by the way. Yes, it was bad, but it was the kind of thing I was in the mood for and it was extremely easy to read. Which made it the equivalent, I think, of school pizza. You remember. 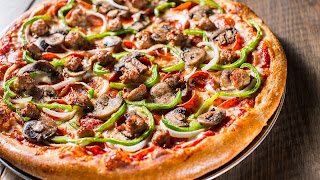 But you get this: 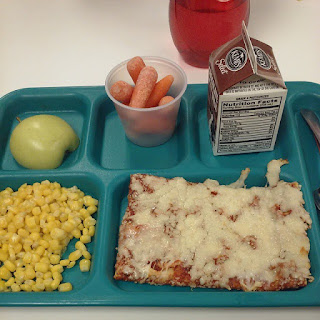 And you eat it anyway because you're 11, and 11-year-olds don't say not to pizza. But what about the cafeteria ladies? Wouldn't they rather be serving this? 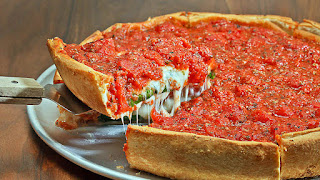 Of course, they would.

So, ladies, you know what to do.