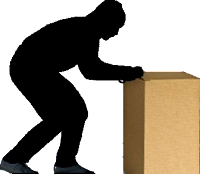 My friend Thrush orders so much stuff on-line, Amazon built a warehouse near his residence. Last year a couple of deliveries went missing, odd computer parts of use only to him. Records showed they were placed at the door, but he didn’t receive them. That tends to defeat the goal of internet shopping of not leaving the house.

After this occurrence, I encountered the term ‘porch pirates’. It turns out some people make a habit of spotting deliveries, sometimes stalking FedEx and UPS trucks, to snatch parcels from the stoop before the owner can retrieve them.

Reports have surfaced of deliverymen too lazy or timid to dash through the rain or snow or sleet or hail or gloom of night for a delivery and simply recorded packages as delivered. Fortunately such skulduggery is rare. Snatch and grab is much more common.

Authorities seldom involve themselves in porch thievery. It’s pretty much up to the homeowner to police parcels. A number of surveillance cameras have caught the unwashed ungodly in the act of larceny and posted the results on YouTube. Sometimes customers get their goods back, sometimes they don’t.

NASA design engineer Mark Rober suffered the loss of a purloined package. When police refused help, he took matters into his own hands.

He built what has become known as the glitter bomb. The video explains better than I. Non-geeks might want to skip a couple of minutes past the two minute spot, but then we see the machine in action.

SleuthSayers to the Rescue

But wait, I thought. What if SleuthSayers built their own lanai larcenist Crime Stopper? What if we readers and writers cooked up a sadistic surprise for blatant banditos? In particular, why not a corpse, a bloodied, battered, putrefying remains of a body? Left amongst the severed parts might lie a note, maybe ransom, maybe threatening.

Not a real corpse, of course, but a facsimile masterpiece to gut those grabbers of goods. Surely our audience could come up with a masterpiece of vile verisimilitude to make a vandal vomit. (My alliteration runs amuck today.)

So I’m thinking Eve could bring her varied knowledge and experience to bear as project leader. Rob and David provide research and guidance. Mary and Melodie’s hospital trauma experience might aid artists. Fran brings us cosmetician knowledge, the know-how to make up a corpse. Surely Paul knows Hollywood makeup experts. Who are the artists among us? Janice for sure, maybe Michael or Lawrence? We need slightly mad writers to pen a frightening ransom note, surely Steve, Stephen and Barb. Brian’s exposure to the world of teens could prove helpful in choice of packaging– Xbox or iPad, none of that fuddy-duddy Dell stuff. I picture RT and O’Neil procuring a skeleton, not a real one but a classroom model smuggled out of Quantico. We’d rely upon John’s computer skills to man the 3D printer, stamping out faux phalanges and fingers, tarsals and teeth. What about our readers?

Flesh texture strikes me as a problem, although gross enough remains might deter curious pokes and probes. Say we want to apply tissue and rancid adipose upon a 3D-printed or purchased skull. Would a slab of jowl bacon be kosher? Or is there a plastic or polymer clay that firms a little but doesn’t become hard? Or would silicon work? Enquiring minds want to know.

What about eyes? The inner strata of decomposing onions or leek bulbs in eye sockets scare me thinking about it. What about rotting brain matter? Would dyed rice pudding or tapioca work? I never liked that stuff anyway, that icky larvae textures. Ugh. Who are the disturbed chemists among us? Enquiring minds so want to know.

Let’s say O’Neil and RT settle upon packaging from an Aibo, Sony’s expensive robot dog. The team packs the diabolical creation in the box. We apply fake labels, set it out on the stoop under the watchful eye of hidden, internet cameras, and it’s good to go.

And then… and then… 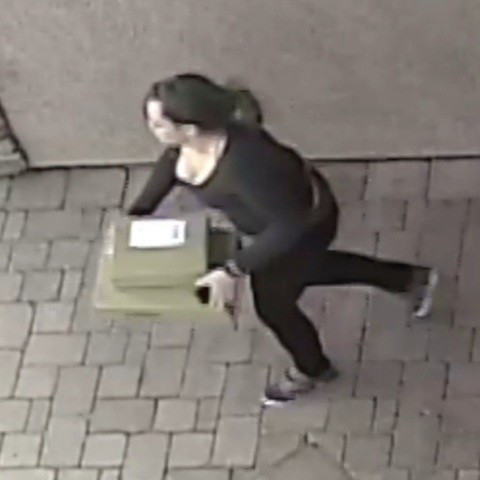 Nefarious package jackers arrive. The gluttonous, greedy gomers glom the heavy box, knowing Aibo’s a $1700 toy. They wrestle it to their get-away van. Jostling activates John’s cameras and GPS. O’Neil and RT track the package to a suspected neighborhood crack house where they find two men and a woman on their butts, flattened against the walls, shrieking in terror.

Authorities commit the traumatized thieves to the hospital’s mental health ward for observation. USPS and Amazon report a 13% reduction in package theft. SleuthSayers head for the nearest bar.

A Hysterical History of Horror

We must avoid the consequences undergone by my friend Robbie. Robbie Pallard worked for Disney as a designer when Terror on Church Street opened a downtown Orlando attraction, a block-long haunted two-storey mansion on steroids. This house of horror’s ghoulish attics and cellars bulged with cruelty and crime. A ghostly graveyard covered the results from its mad scientist labs.

ToCS picked Robbie to design their sets, mostly scenes from infamous horror movies. He tapped me to build their web site and a couple of props.

Their choice of Robbie wasn’t accidental– his reputation preceded him. He was once commissioned to decorate and stage a vignette for an upcoming Halloween party at a fancy, upscale house.

Sometime after completion, a visitor comes to the door. Getting no response from the doorbell, the nosy nelly peeks through windows. Moments later, the hysterical busybody phones police, screaming.

SWAT bursts in. They encounter a gut-turning scene… a tortured body hanging from the staircase. Underneath, a chainsaw rests on plastic sheeting. Cops race to track down the owners; the owners race to track down Robbie. He explains, owners explain, disbelief ensues, hilarity does not. Cops eventually go home. Busybody and news trucks go home disappointed no murder occurred.

The Demise of Terror

Terror on Church Street suffered a sad demise. Once the site of McCrory's 10¢ Store at 135 South Orange Avenue, the colorful and popular attraction provided employment for numerous students, vendors, and goths who could work in their natural habiliments without drawing personal criticism.

The attraction grew too popular for its own good. The building was a historical site, registered and protected by the local Historical Society. Unfortunately it sat on a very valuable square of land in one of America’s most popular cities. The shame that happened next made the nightly news.

In violation of the state’s Sunshine Law, the mayor and cronies met after hours in a closed door session. In an after-hours coup, they authorized demolition of the building. Wrecking ball cranes and bulldozers that had been standing by, were already moving into the city. Through the night, they flattened the building to rubble. By dawn, nothing was left of the building but shattered bricks. The Historical Society was furious a protected building had been destroyed in a nighttime fait accompli.

The mayor justified leveling the structure without due procedure by characterizing it as an imminent danger to the public, requiring immediate action. That morning, Code Enforcement was laughing, noting ToCS was one of the most inspected buildings downtown, regularly visited by building department officials and almost daily by fire inspectors.

The Historical Society wrung its hands; the destruction was complete. Within days, construction began on a $20-million tower. Political machinations constituted the real terror on Church Street.
Posted by Leigh Lundin at 00:00