Pop the Clutch: Back to the Fifties


by John Floyd
Like many of you, I occasionally have a story published in an anthology. Sometimes I see a "call for submissions" and send off a story in the hope that an editor will like it, sometimes I'm invited to contribute a story, sometimes I'm fortunate enough to have one selected for a best-of-the-year anthology. However it happens, the story usually fits a "theme." Recent anthologies I've been involved with had themes that range all over the place: the military, food and drink, visions, Joni Mitchell songs, sanctuaries, Donald Trump, the full moon, Florida, New England, Texas, the South, horror, mystery, romance, and time travel. 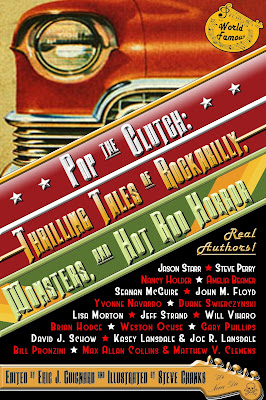 Last month I was lucky enough to have a story published in a book that's turned out to be one of the most interesting anthologies I've seen in a while. This was one of those "write it from scratch" stories that would never have been created if not for this specific project. The book's title will explain that--it's Pop the Clutch: Thrilling Tales of Rockabilly, Monsters, and Hot Rod Horror. And yes, all those elements appear regularly in the 18 stories included. The publisher is Dark Moon Books and the editor is L.A. author Eric Guignard, who won a Bram Stoker Award in 2013 for his anthology After Death. (I was in that one too, although I suspect that my story didn't singlehandedly earn the win.)

I also suspect that one reason I found the Pop the Clutch project fascinating was its unique theme. There's just something compelling about the 1950s, whether you lived in that time period or not: jukeboxes, roller skates, film noir, Elvis, motor courts, cigarettes, sock hops, TV westerns, sideburns, coonskin caps, Hula Hoops, croquet, wheelies, flat-tops, ducktails, and so on. And when you add a dose of fantasy and horror to that already magical era . . . how could a reader not enjoy that? It's Daddy-o and the Mummy, all at once. You can be on another planet without leaving Earth.

What made me especially grateful to be included in this book is the fact that three of my literary heroes--Joe Lansdale, Bill Pronzini, and Max Allan Collins--were also invited to participate. Anytime my name winds up beside the names of folks like that in a ToC, well, my head grows by a couple of hat sizes and I dream that maybe I'm finally making something of myself, Mom. And even though I wound up enjoying, as expected, the stories those three authors produced for the book, I liked the others also.

If I had to pick half a dozen favorites, they were probably "Dr. Morrismo's InsaniTERRORium Horror Show," by Lisa Morton; "Tremble," by Kasey Lansdale and Joe R. Lansdale; "I'm With the Band," by Steve Perry, "The Prom Tree," by Yvonne Navarro; "The She-Creature," by Amelia Beamer; and "Universal Monster," by Duane Swierczynski.

My own story in the book (he announced, modestly) is "The Starlite Drive-In," a mystery/horror tale set in present-day Mississippi that winds up tied to the 1950s in a weird and otherworldly way: real creatures from old movies like Mothra and The Blob and I Was a Teenage Werewolf start turning up (and gobbling up the citizens) in the rural area near an abandoned drive-in movie theater that once screened those masterpieces--and a worn-out sheriff and his female deputy find themselves in a life-or-death battle with this army of creepy and bloodsucking critters. (If you think I didn't have a great time writing this one, well, you weren't a teenage werewolf.) 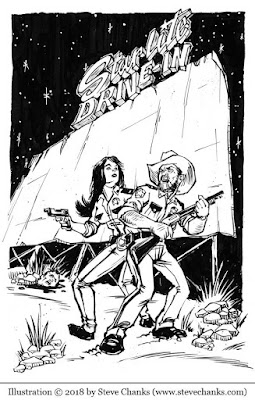 Even if you aren't old enough to have experienced the Fifties firsthand, this book will make you feel like you're there. Worst case, you'll want to put on a poodle skirt or grease your hair (hopefully not at the same time)--and best case, so help me Godzilla, you'll be inspired to re-watch some of those deliciously stupid monster movies from that era.

I must include, here, a word of thanks. First to Eric Guignard: if you happen to read this post, Eric, I'm indebted to you for bringing me aboard for yet another of your anthologies. And thanks also to those of you who buy and read this wild bunch of stories. If you like 'em half as much as I did, your time and money will have been well spent.

Let me close with some questions for my fellow short-story writers: How do you feel about anthologies? Do you send stories to anthos as often as you do to magazines? When you do, do you prefer creating a story first and then looking for a market, or trying to write to a pre-determined theme? Are most of your antho stories mysteries, or have you tried other genres (or combined genres, as I did with this one)? Are they usually submitted as a result of an invitation, or as an audition? Are most of these publications paying gigs, or for-the-love-of-it projects?

Okay, back to the dragstrip. Start your engines and hit the gas.

Where'd I put that Brylcreem…?
Posted by John Floyd at 00:01