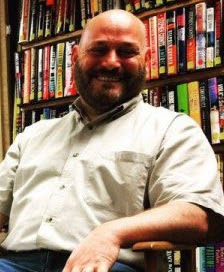 I first met Frank Zafiro way back in 2007 at the Left Coast Crime Convention here in Seattle. Although we're both Spokane boys, our paths never did cross during our time in the Lilac City. We've stayed in contact over the years and I've watched from afar as he's worked his butt off to build what's shaping up to be an impressive writing career. I recently caught up with him via email preparatory to doing some "hanging" (as I'm given to understand the young people are calling it these days) at this year's Left Coast Crime Convention, taking place next month up in Vancouver.

First, a bit about Frank:

Frank Zafiro was a police officer in Spokane, Washington from 1993 to 2013. He retired as a captain. He is the author of numerous crime novels, including the River City novels and the Stefan Kopriva series. Many of his novels have been collaborations with other authors. He lives in Redmond, Oregon, with his wife Kristi, dogs Richie and Wiley, and a very self-assured cat named Pasta. He is an avid hockey fan and a tortured guitarist. You can keep up with Frank at FrankZafiro.com.

Your background is in law enforcement, right?

Yes. I served twenty years (and a day) with the Spokane Police Department. My career included working patrol, being a detective, working with volunteers, before I set onto a leadership path. As a leader, I worked in patrol, investigations, commanded the K9 unit and the SWAT team, before getting to the executive level. As a captain, I was in charge of all of patrol, and later all of investigations and specialty units. I'm not bragging here, just pointing out that my experience on the job really helps when it comes to my books, because I've had a taste of a lot of different facets of police work, from rolling in an alley with a bad guy while on patrol to battling through budget issues in the executive meeting room or down at city hall (the alley was easier and more honest, in my experience).

When did you start writing? Has crime fiction always been your fiction focus?

Like a lot of writers, I started early. I can remember wanting to be a writer at ten, and by the time I was thirteen, I was writing stories. They were derivative and terrible, of course, but that's how you start. Most were either fantasy (I read a lot of Tolkien and Piers Anthony in those days) or other action vignettes. I stumbled onto a lot of "great ideas" that every writer thinks s/he invented. For example, a gem I wrote at thirteen or so that I eloquently titled, "Nooooooooooo!" in which an American soldier and his squad are sent on a mission disguised as North Vietnamese (I probably originally wrote it as Viet Cong, but whatever). Of course, he gets separated from his unit, and of course, he runs into a squad of NVA that he mows down.... only to find it is his own squad. "Noooooooooo!" 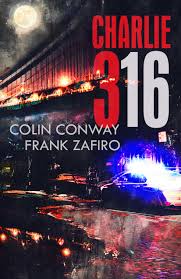 Like I said, most of us suck in the beginning, in one way or another.

I wrote a lot throughout my early twenties and even after I came on the job, but the first true crime fiction I wrote was when I started my first novel, Under a Raging Moon, in 1995. I got a bare bones draft finished, but then it sat in a drawer (literally, it was on paper) from 1996 to 2004. During that time, I went back to college full time while working full time. In addition to the school work over the two and half years it took me to finish my degree, my job changed every couple of years from '99 forward -- officer to corporal to detective to sergeant, all in the span of 1999 to 2003. As a result, I had a lot of learning to do. So while I did a ton of writing on the job and at Eastern Washington University (I was a history major, and we read and write a ton), I didn't write any fiction. In 2004, I became friends with Colin Conway, another cop and a budding writer himself, and I was finally in a place where I could look outside the job and embrace writing again. I started doing just that, and the stories that came out were mostly crime fiction.  Which makes sense, right? I'd been surrounded by that insular world for a decade by that time. 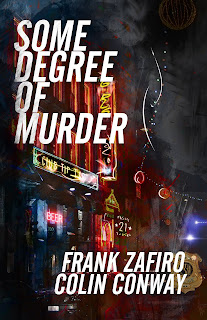 In addition to writing short stories (I was a Derringer finalist three times, but never won), I dug back into Under a Raging Moon, which became the first book in my River City series. River City is a barely fictional Spokane, and the focus of the series is the men and women of the RCPD. While I strive for heavy realism, my view of police officers is decidely positive, and so readers will see that the cops, while far from perfect, are the good guys in this series. It is an ensemble cast with narrative viewpoints from six or eight recurring characters. Think Southland, or if you're older, Hill Street Blues.

This is no paean to police, though. The mantra I always remember as I approach each new book is that the good guys usually win...but not always....and never without a price. This is clearly exemplified in the character who has emerged as the core of the series, Officer Katie MacLeod, or in an officer who fell from grace early in the series, Stefan Kopriva (the Stefan Kopriva mystery series is a spin off from River City). Both officers go through hell, and how they respond and endure it is a big part of what interests me. Ultimately, I want to show police in an honest, realistic, positive light in this series.

Tell us about your work with Eric Beetner. How did that come about? 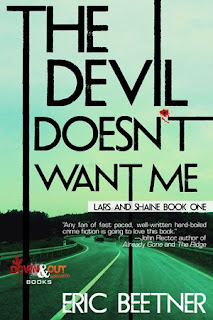 Eric is one of five authors I've collaborated with (including the aforementioned Colin Conway). By the time we met (he did some cover designs for me is how I think we got introduced), I'd already written several books with a couple of other authors, and I saw that he'd collaborated once before, too. I read his THE DEVIL DOESN'T WANT ME, which totally rocked, and I said, "Hey, if you ever want to work on something together, that'd be awesome."

He kinda gave me the "yeah, yeah, sure" brush off, not out of any malice but just because he'd had a good experience in his first collaboration and didn't imagine the odds were good it would happen again. I kept at him every so often (I think in one interview on my podcast, he described it as 'stalking', which is almost certainly embellishment. Maybe) for a couple of years. Finally, I mentioned it a-GAIN, and he was about to say, "Yeah, yeah, sure" a-GAIN, when he hesitated. He had an idea brewing that actually might work better as two viewpoint presentation, in which a pair of hitmen are given separate lists of targets to take care of by their mafia employer in order to see who keeps their job as the mafia downsizes. All of my joint efforts to that point had been formatted in a dual first person narrative with alternating chapters, each writer handling one of the two main characters, and Eric thought this new idea of his would work like that. 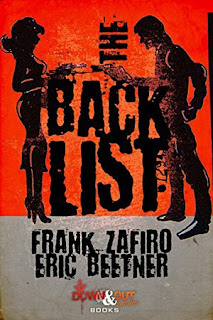 So he pitched it. Now, I loved the idea, but honestly, what am I gonna do at this point? Say no? I mean, he could've pitched a nursery rhymes re-boot, and I think I'd have said yes. Luckily, he went with The Backlist, which was the first of our Bricks and Cam Job series. Eric wrote the hapless Cam, who is not quite a bumbler, but sorta is, and I wrote the sharp-tongued Bricks, who is the consummate professional and takes no shit from anyone. It went great. Eric is easy to work with, and writes the cleanest first draft I've ever seen. We played off each other well, which was important, because although the two characters are on their own for the first part of the book, they eventually meet. So we both had to write scenes including the other's character, which I think is something you have to be respectful about.

Anyway, spoiler alert, but Cam and Bricks both survive and go on to have two more adventures in The Short List and The Getaway list. In all three books, Eric wins the prize for biggest gross-out moment, hands-down.

What’s coming out next from you? 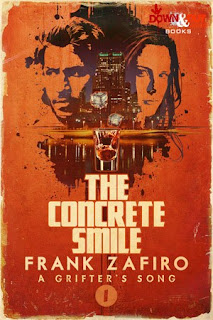 I'm editing a novella anthology series I created called A Grifter's Song, so a new episode of that drops the first of each month from January to June. My own entry, The Concrete Smile, started things off in January. My first collaboration, Some Degree of Murder, with Colin Conway is being re-issued by Down and Out Books in March, so that's cool. They are also publishing another Conway collaboration in June called Charlie-316, the first of a four-book arc that I'm incredibly stoked about. And I'll be releasing the sixth River City novel, Place of Wrath and Tears, sometime in late Spring 2019.

Nice reference to Henley's poem Invictus with that title! What are you working on now?


Finishing up the edits on two novels. One is a stand alone called In the Cut, which is set against the backdrop of an outlaw motorcycle gang. It's scheduled for a Jan 2020 release. The other is the second in the four-book arc with Colin Conway (we're still debating the title), which is slated for June 2020. I'm writing the bonus subscriber-only story for inclusion in A Grifter's Song. It is essentially episode 6.5, set between the two seasons, and will only be released to those who subscribe to the series.

Thanks a lot for taking the time to talk with us here at Sleuthsayers, Frank! And for those of you heading to Vancouver for Left Coast Crime next month, look this guy up!