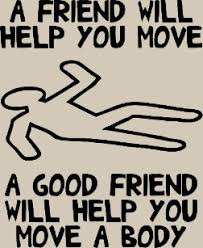 They say write what you know, but we can’t always write what we know because that would severely limit what we could write. I don’t think George Lucas or Robert Heinlein ever went to outer space before they wrote about it. And most of us here are crime writers or readers, but how many crime writers have actually lived a life of crime? Aside from speeding or maybe smoking a joint or a little underage drinking, not exactly heinous felonies. How many of us have committed those?

I’m no goody two-shoes (does anyone say that anymore?) but I also haven’t lived a life on the lam from a criminal past. As RT mentioned recently, I may have had homicidal fantasies, but I only carry them out on the page. I did, however, get a ticket for jaywalking once.

As I’ve mentioned before, I like to watch the Murder Channel, the Discovery ID Channel, 24/7 Murder, Mayhem and Betrayal. And one of the things that strikes me in many of the cases they cover is how, not only the main bad guy can so easily kill—and often someone they had once loved,—but how easy it is for them to find friends who will help them carry out their deeds before, during or after the fact. Someone to join you in the fun of murder, or join you afterwards to help you dispose of the body, lie to the cops, etc. Think about your circle of friends. Is there anyone you could turn to to help you kill someone or bury the body afterwards? I know I travel in certain circles, but I don’t think anyone I know would be willing to do that…except maybe the guy I wrote about last time, Brian McDevitt. But since I never tested him on it I can’t say for sure. But you know what they say, a friend will help you move. A really good friend will help you move a body. I’m not sure I have any really good friends… But so far I haven’t needed one. I guess I’ll find out if the time comes 😉. 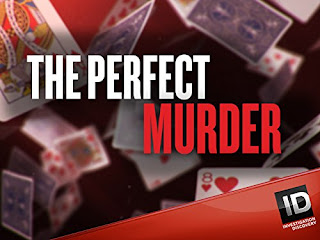 And though I may not have murdered anyone, my life of crime began at a very early age. When I was around eight, I’m guessing, I stole a couple pieces of candy from a market. Once we got outside my dad noticed them in my hand and made me take them back. It was humiliating but it taught me a lesson—crime does not pay.

When I was in my late 20s, I was approached by a couple—no not for that. They wanted me to marry a friend of theirs from Lebanon so she could become a citizen. They would pay me and at the time I could have used the money, badly. I told them I’d think about it. But I didn’t really need to. I knew I wouldn’t—couldn’t—do it…because it was both wrong and illegal. Nonetheless, I went home and got back to them a day or two later with my negative response. They weren’t happy, but I could live with myself.

But I did commit a crime while down in San Diego. A buddy of mine and I wanted to go to Belmont Park, a small seaside amusement park. We didn’t want to pay, so we hopped a fence on the back side, climbing over barbed wire, and jumped into the park. Nobody caught us. Not exactly in the category of mass murderer, but still illegal.

McDonald’s Incident 1: Also, in San Diego, but another time, another person—my brother this time. We went to McDonald’s. They gave him too much change. A twenty instead of a five. I made him return it. Not a crime, of course, but it ties in with the next point:

McDonald’s Incident 2: Up in LA this time. They short-changed me. I pointed it out. They made me feel like a liar, a thief and criminal. They made me wait while they closed that register and rectified. They found they were wrong and I was right. They gave me my change but never apologized. This happened shortly after the first McDonald’s incident, so I felt like a sap for being honest that time. But I’d probably do it again.

Rear-ender: I was on my way to teach a class. Occasionally I taught one-night screenwriting seminars. I was sitting at a red light and I see this huge Ford pickup barreling down on me. I tried to pull over, but couldn’t in time. He clipped me, sent me through a lamppost and destroyed my car (see pix). I was lucky to get out alive. Luckily I wasn’t hurt more. And all I wanted from his insurance company—and everyone knew and admitted that he was 100% in the wrong—was to have my medical paid, real replacement value for my car, not the bluebook value—I proved to them that these cars were going for more than Bluebook. And for them to pay for my rental car. His insurance company lied to me over and over. They also tried to screw me more ways than one. I had tried being honest and straight with them. But I realized the error of my ways: not getting a lawyer and finally got one. And I’m sure that whatever settlement we got was more than what I would have settled for initially…because I am an honest person and didn’t want to screw them. But they wanted to screw me…so I screwed back, legally. 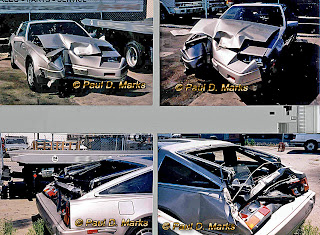 I probably shouldn’t say this, but since it’s from my wilder and younger days, and I don’t do it anymore: I used to carry a very sharp knife with me. And when people would block me in a parking place one way or another, well, let’s just say they had a hard time driving home…after I slashed their tires. I never felt bad about it. It shouldn’t take me ten minutes to crawl into my car or work my way out of a parking place. It was sort of instant justice.

I may have done some other things, heated arguments and sometimes fights, but nothing major. Never stole (except for the candy when I was a kid), murdered, burgled, robbed. But I write about people who do. And, of course, I did pull a gun on the cops that time...and lived to tell about it… But for that story you’ll have to check out my website: https://pauldmarks.com/he-pulled-a-gun-on-the-lapd-and-lived-to-tell-about-it/

So………..do you know anyone who would be willing to help you move the body?

Colman Keane interviewed me for his blog, Col's Criminal Library. Check it out: