In public, in the window of a bookstore with customers milling around, clerks ringing up sales, passersby gawking at the man behind the typewriter and interrupting him with questions – Harlan Ellison wrote short stories. He did this in bookstores around the country, wrote over a hundred stories this way to demystify the writing process. He also did this to promote a book or a bookstore. 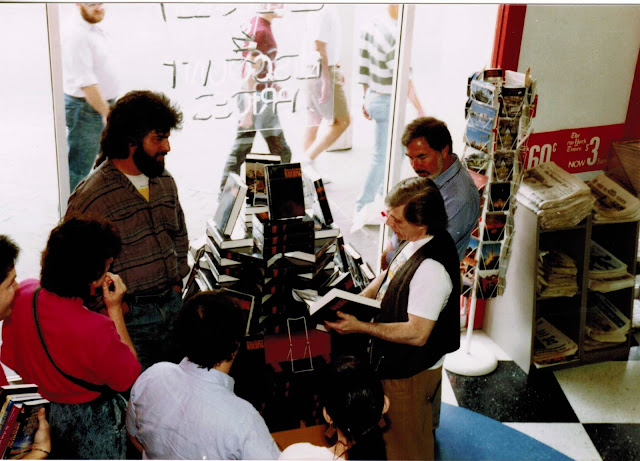 As author-editor-publisher Dean Wesley Smith recently posted, "Harlan called bullshit on the rewriting myth. And he not only called bullshit, he showed clearly, in public, another way."

I witnessed Harlan write a story when he came for the Tennessee Williams New Orleans Literary Festival in 1990. Typically, a stranger was enlisted to provide an opening line and Harlan would sit behind his Remington typewriter and write the story, having someone tape the pages to the bookstore windows as he progressed.

On Saturday, March 31, 1990, New Orleans nightclub owner and exotic dancer Chris Owens presented Harlan the opening line for a story which Harlan took, sat down and wrote a 4,700 word story entitled "Jane Doe #112," The story of a man haunted by six wraiths, six sickly white faces, not ghosts but figures "as if made of isinglass." 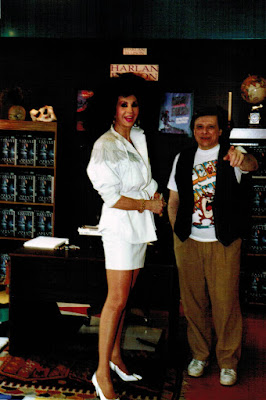 I watched, took pictures, listened to people ask the writer questions as he wrote, a couple asking extra questions in a gleeful attempt at derailing Harlan, which did not work. I remember him sending me off through the bookstore to look up a fact he needed for the story. 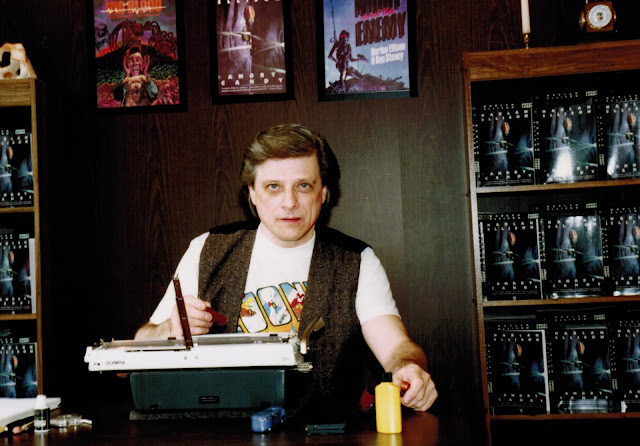 Harlan Ellison and his Remington typewriter

I'm paraphrasing Harlan here. He explained he wrote this way to rebuke the belief writing is mystical, a special process reserved for the few who know the rules, know the secret handshake, wear the invisible super-secret decoder ring. He wanted to show a writer did not need an outline or writing in support groups, critiquing, did not even need re-writes. 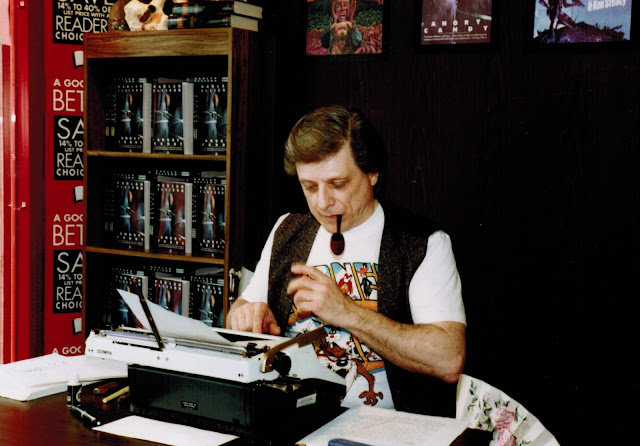 Dean Wesley Smith is correct in his description of Harlan – "He was a performer, a carny, a man in need of a reason to write a story." As the publisher of Pulphouse Publishing, Dean and Harlan put together a three-volume project called ELLISON UNDER GLASS, to include all the stories Harlan wrote in pubic. Unfortunately, Pulphouse went out of business and the volumes were never published.

In 1990, I was awaiting the release of my second book, THE BIG KISS. For a writer like me who writes in spurts (some long spurts), a writer who re-writes and tweaks and fine-tunes each story and novel, I was amazed as Harlan's feat. I write like a sculptor chiseling a marble slab. Harlan wrote like a painter using delicate, lethal, awe-inspiring brush strokes. 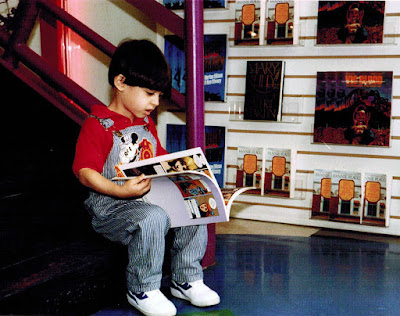 4-year old Vincent De Noux thumbing through his autographed copy of the graphic novel
VIC AND BLOOD: THE CHRONICLES OF A BOY AND HIS DOG by Harlan Ellison