by Paul D. Marks
Please make sure to scroll to the end (but I know you will ’cause you’ll have read the whole piece by Larry 😊), to see my announcement about SleuthSayers, the Derringers and other awards.
My pal Lawrence Maddox's background is in editing for various television shows, including Santa Clarita Diet, Raising Hope, and many more. His crime fiction has appeared in the anthologies 44 Caliber Funk and Orange County Noir. Larry scripted the Hong Kong kickboxing flick Raw Target and the indie musical Open House. His debut novella Fast Bang Booze (Shotgun Honey) debuted last month.

I thought it might be interesting to see how Larry applied his visual editing background to his prose writing. So take it away, Larry: 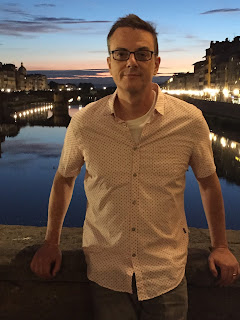 “They want to publish Fast Bang Booze, but you’ll have to turn it into a novella. That’s twenty-five thousand words,” Gary Phillips said. “And they want it in the next couple weeks,” he added dubiously.

This was a great opportunity for me, but I wondered if I could cut my novel nearly in half without turning it into something I wouldn’t be proud of. At the time I was also working substantial hours editing a TV show, not to mention raising a family. Time would be tight. If I had any chance at coming out on top of this, I knew I ‘d have to fall back on a set of skills I’d been honing for years—maybe I could apply my skills as a television editor to the editing of my novel..

As a network TV editor, I’m tasked with building an episode scene-by-scene, following the script as I pick the angles and performances that best tell the story. I’ve worked in just about every genre, but my bread-and-butter are half hour single-camera comedies. They’re the hardest. They don’t just tell a story, they also tickle the funny bone (or try to). My shows (single-camera comedies) don’t have laugh tracks that tell you when the show is funny. I’m happy about that, too. Don’t get me wrong, I grew up on multi-camera shows (I’m currently introducing my eight-year old to The Munsters—she loves it), and many of them still shine, decades later. But as I got older, I found that laugh tracks seemed 1984-ish, especially when the writing was clearly mediocre. It’s like Big Brother is telling you, “Everyone else thinks this crap is funny, why aren’t you laughing too?” Single camera comedies don’t have the crutch of the laugh track.

The shows I edit are like carefully constructed mini-movies with three acts and multiple jokes per page. There are no pauses for live audience laughter. You know it’s funny because you’re not searching for your remote control in that pesky crevice in the couch. And humor moves. Pace is king and that’s something I definitely applied to my novella: pace—keep it moving.

While the show is being shot, usually over the course of five days, I’m putting it together. It’s like assembling a massive jigsaw puzzle where every piece talks and reacts and forgets what their lines are. I’m not supposed to cut any dialogue when I’m doing the initial edit of the show, called the Editor’s Cut. I’m often dying to, but I get why I can’t. Those words represent big bucks, as well as hard fought battles in the writer’s room. Showrunners (writers usually) who are the main creative forces behind TV shows—don’t even like director’s taking dialogue out when it’s their turn to take a whack at their episode. When directors do their pass through the show after I turn over my cut, they inevitably turn to me in the edit room and ask, “Is the showrunner okay if I chop out dialogue to help get my episode to time?” I will usually respond, “Sure, if you don’t mind not getting hired back.” Then we carry on as if the conversation never happened, all dialogue left untouched, the auteur theory a burning, distant ember.  In TV, the writer is king and queen. Directors are hired guns who need to tread carefully where all things script-related are concerned or they could end up being “one-and-done.” 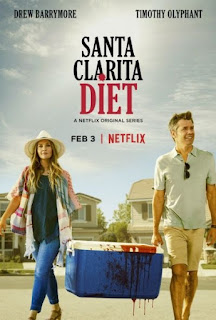 When the director leaves after their DGA-enforced two days with the editor are over, the showrunner finishes up with their own notes, as well as with notes from the studio and the network. If they don’t like what the director did in the editing room, they’ll often use the Editor’s Cut as their basis.  Now is the time when the elephant in the room takes a seat on the couch behind the Avid (the prevalent non-linear editing system used in TV and film), and begins to tap his Rolex. It’s get-the-show-to-time time. I should mention that many cable and streaming shows are a lot more loosey goosey with running times. While cutting Santa Clarita Diet, getting episodes to time is rarely an issue. I get to concentrate on the fun stuff, like the lovely and talented Drew Barrymore eating people.

Getting a show to time is the Jason Voorhees of network postproduction, the looming obstacle that faces every editor, over and over again. For a half-hour single camera comedy, “getting to time” means making sure an episode comes in at twenty-one and a half minutes. This timing differs from network to network, but not by much. The pilot I’m currently editing can’t come in over twenty-one minutes and twenty-two seconds. Episodes can come in a little shorter, but not a frame over. Remember at the beginning I told you that I start this process by building an episode scene by scene, closely following the script? What if that script is, say, thirty-two pages? At the minute-per-page standard calculation, we’re talking a thirty-two minute first cut. That’s ten whopping minutes—one third of the show—that needs to come out. That’s not editing, that’s liposuction.  And I don’t have all day. At this stage, they’ve already started filming my next episode. That means I’m back in dailies (shot footage), starting the process all over again. I’m finishing one episode and starting another. I have to act quickly.

My showrunner will come up with many of the trims, but they’re even busier than I am. They have to monitor what’s happening on set and in the writer’s room. Egos have to be massaged. Often, showrunners depend on the editor to come up with ways to take the time out of the episode without hurting it. So, when I’m in this position with my own fiction I ask myself the exact same questions I do when taking the excess baggage out of the shows I’m editing. Is this redundant? Do I have to keep this character beat or is this ground covered elsewhere? Have I over-stayed my welcome in this scene? TV editing has taught me the joys of being callous and bloodthirsty. Ruthlessness is called for. Babies are going to be killed. The editing room floor will be awash in punch lines and exposition, as will the outtakes in my novel, hopefully more of the latter than the former. 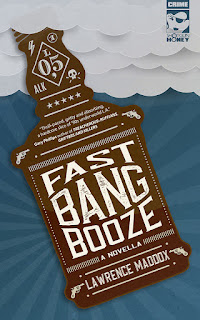 The through-line of the episode’s A-story should remain unscathed, which is also how I approach my prose. In TV editing I’ve had to be adept at juggling all the story lines as the episode shrinks. Many a B-story has been the victim of a subplot-ectomy in the service of getting an episode to time. When I did my Novella pass through Fast Bang Booze, I lost an entire B story (actually, it was more like a D-story) and no one was the wiser. It made the main story even stronger.

A pilot is the first episode in a proposed TV series. If the pilot doesn’t go well, the series is scrapped and the pilot never sees the light of day. The scripts for pilots inevitably come in over thirty pages, and cutting them down to time are high-pressure situations. The big fear is losing elements about the main character(s) that everyone loves. I’ve learned that this stage is an opportunity to refine the characters and make sure they are consistent. The pilot for Suburgatory had a lot of first person narration. As we whittled it down, the narration was re-written and improved until it was sharp as a one frame splice. Less really was more.

I have to see the big picture and also travel through an episode line by line. Every word is scrutinized in dialogue, and much of it is boiled down editorially to the bare bones. Excess verbiage is jettisoned, word-by-word, until the dialogue flies. I do this when I’m editing my own work. And when I’m done, the leanest, meanest version of the episode is infinitely better than its former self.

So when Gary threw down the novel-to-novella gauntlet, I didn’t freak out. I put on my edit room goggles and did what I do. Except this time, I was ruthless and mean for me, not for a network.  And it worked. I was amazed with how well it worked.

I should add that the original publisher I was writing for went belly up, but Eric Campbell and Ron Phillips of Down and Out Books and Shotgun Honey snatched up Fast Bang Booze, and it debuted March 23rd. If you’d like to see my criminal take on my under-the-gun profession, check out my story “Smotherage,” an extra bonus found at the back of my novella that details the pressure cooker world of editing TV pilots, and “Hot Moviola,” in the anthology 44 Caliber Funk (Moonstone), is about an editor caught in a world of intrigue in 1974 LA.

Thanks for stopping by, Larry. Good luck with the book! And you can find Larry’s book here: Down & Out Books and Amazon.

Derringer Nominations have come out: (https://shortmystery.blogspot.com/2018/04/2018-derringer-award-finalists.html ). I want to congratulate all the finalists, including SleuthSayers’ own Elizabeth Zelvin "Flash Point,” from A Twist of Noir (March 20, 2017) and Robert Lopresti, “The Cop Who Liked Gilbert and Sullivan," from Sherlock Holmes Mystery Magazine #23, editor: Marvin Kaye, Wildside Press (October 2017).

My story “Windward” is also nominated in the novelette category, from Coast to Coast: Private Eyes from Sea to Shining Sea, edited by Andrew McAleer and Paul D. Marks, Down & Out Books (January 2017).

But the truly mind-blowing thing is that 4 stories from Coast to Coast: Private Eyes from Sea to Shining Sea have been nominated: Mine, Andy McAleer’s, Matt Coyle’s and Robert Randisi’s. I’m truly amazed and honored for such a great showing from a terrific book. And many thanks to the Short Mystery Fiction Society:


And another SleuthSayers’ story, Art Taylor’s “A Necessary Ingredient” is nominated for an Agatha. SleuthSayer John Floyd’s “Gun Work” and my story “Windward” have been chosen for inclusion in The Best American Mysteries of 2018 by Louise Penny and Otto Penzler. – And I want to thank all of the authors who contributed stories to Coast to Coast. – So, like I said, mind blowing. And I’m thrilled to be part of it on various levels.

My Shamus-winning novel, White Heat, is being reissued in May by Down & Out Books. It’s available for pre-order on Amazon.  Release date is May 21, 2018: 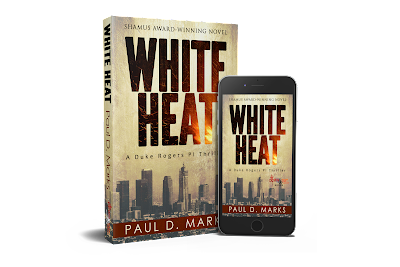