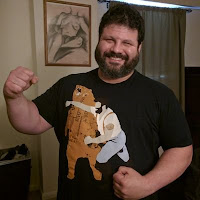 Recently a writer shared a link about How to Avoid Three Career-Killing Moves in Writing.
And being a writer who doesn't want to kill his career, I clicked. Now what were these moves? Going on vitriolic diatribes against reviewers who deign to give you any fewer than five stars? Buying a book by a writer who gave you a bad review, shooting it with a shotgun, and mailing it to her? Spitting on writers you don't like at cocktail parties?*

I'm not kidding. Now I can pick up successful books that use any of these without even trying. Of course, they need to be done well, but that goes with anything. I just had to laugh. Writers are still peddling The Rules, and using them to further their careers.

Writing workshops and books on writing can have real value, but be wary of anyone who says there are hard and fast rules for writing. Careers have been made on hawking "the rules", but if you read widely in the genre you want to write in, you'll learn what rules can be broken with skill. I recently read Laura Lippman's excellent Wilde Lake and she uses first person for the past scenes, with the narrator as a child, and third person when she's an adult. The point of view never wavers from the protagonist's, but it was an odd choice to use first person for the past and third for the present. But Lippman knows what she's doing, and it works wonderfully.

In my Denny the Dent stories, I have always used past tense for his childhood and present for "now," which annoyed one editor who demanded that I change it all to past tense. That has been corrected in my new story collection, Life During Wartime, which includes three Denny the Dent stories, and 21 stories total. I like to juxtapose childhood and adult scenes, and Lippman's method is very appealing, because children lend themselves to the first person, and adults are better at hiding things about themselves, so the third often works better. It wasn't third omniscient, it was limited to the protagonist, but we learned things about her that she was unlikely to share in first person.

Third omniscient has its place, but mystery often requires the limitations of perspective to "work." But not always. Two of my favorite Lawrence Block novels bounce between first person narratives of his sleuth Matt Scudder and the killer he is hunting, as he commits the crimes. This actually amps up the tension because we know how much danger Matt and Elaine and their friends are in, when from their perspectives, we would have no idea. This gives us the suspense of the bomb under the table rather than the short tension of the murderer appearing from nowhere and the victim dying in terror.

Eva Dolan breaks the rules in her thriller This is How it Ends, which I just started reading. It's gripping so far, and the POV changes are made clear in the chapter headings. That's not my favorite way to do it, but it works fine. But she needs it, because one character is in first and the others are in third. James Lee Burke does this as well in his Dave Robicheaux novels. He's a master, but sometimes this is confusing. Is the third person section what actually happened, or is it Dave telling us what he thinks happened? We can't be sure. In Swan Peak I am told he uses dueling first person perspectives and has them both on a phone call. I can't wait to see how he pulls it off. My buddy Josh Stallings--the author of the Mo McGuire hardboiled L.A. crime thrillers, and his wonderful disco-era heist novel Young Americans--raved about how well Burke handled it, so I have moved that book up my list.

For me, I prefer a loosely limited third and signify changes by beginning the sentence with the character we are following. Sometimes this is called "head jumping" when done too often, but Carl Hiaasen does it well enough, and it is entertaining as both a reader and a writer to get in the heads of bizarre characters. For me, it's fun to change voice and let the characters speak for themselves, rather than through the lens of one narrator, and you can get backgrounds and motives across much more easily than by playing games so the narrator learns it. But I enjoy singular narratives as well. In Bad Boy Boogie, the story revolves around the deceptions of Jay Desmarteaux's friends and family, so I limited the story to what Jay saw, except for one pivotal scene that drives the entire book. His greatest fear is becoming the monster that he killed, so I wrote from the perspective of that monster for one chapter, at the very end, to show the difference between them. Jay may not know the difference, but we do.

If that kills my career, put it on my tombstone.

I'm going to break my own rule and tell you my rules, which you don't have to buy on Kindle or subscribe to my Patreon to learn:

Not following these won't kill your career, but they may hinder you getting a career started. I'm not sure what can kill a writer's career if they keep selling books. Killing pets, beloved characters, bouncing away from beloved series to write standalones they love... these have hurt careers, but not always killed them. They return to favorite series characters, revive them like Misery Chastain, and they are back in the saddle... maybe short one foot, like Paul Sheldon in Misery.

* Just kidding, Richard Ford did the latter two of these and still has a career