From the Analytical to the Imaginative


by Art Taylor
This post appears on the last day of the last week of the semester's classes at George Mason University—but while this may seem to mark an ending of sorts, it's also a beginning, because as I'm writing this, I'm thick in the middle of grading those final papers, projects, and revisions that have suddenly appeared.

And then there are exams beginning next week, so the moment we finish up one batch of grading, another batch will arrive.

One of my classes is an upper-level creative nonfiction class, a smaller workshop filled with some fine and even extraordinary writers. So many of their submissions are really a joy to read, and I find myself eager in many cases to see what some of those writers are going to produce next. Grading there is work, no doubt about it, but it's also fun in many ways.

My gen-ed lit class, however, maxed out at 75 students—much larger, many more assignments to manage. And students in this class often face more struggles with writing.

The class itself has been enjoyable—the subject is "Sherlock," so hard not to feel indulgent about the readings and discussion—and I've been fortunate to have a great T.A. for the class to help with grading. But as the final days loomed, both of us got that deer in the headlights look about the onslaught of project and exams ahead. At the beginning of Monday's class, I told her flat-out I was dreading it—and one of the students overheard our conversation and piped up with, "We are too! So why are you assigning all this?"

Clear answers to that one, of course: We need to have ways of measuring learning and performance. But the whole exchange underscored the fact that all of us were feeling overburdened a little and on a sharp turnaround for meeting deadline after deadline. 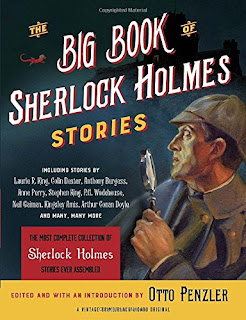 One thing I've tried to do to boost enthusiasm at end-of-semester in my lit classes: Give students the opportunity to write some fiction themselves. While many students still choose to write a more traditional analytical essay—thesis, textual evidence, etc.—others welcome the chance to, in this case, write their own Sherlock Holmes pastiche or parody. We've read a number of Sherlock stories by writers other than Conan Doyle in The Big Book of Sherlock Holmes Stories, and I've been grateful to have a couple of writers Skype into the class to talk about their own stories reworking the characters and these elements, including Dan Stashower and Dana Cameron. And several of the students have been pursuing terrific ideas: Sherlock and Watson investigating a scandal related to Brexit, Sherlock Holmes on a visit to Mason's campus and investigating shenanigans in the classroom, and then something about Sherlock as a Mason student himself and losing some laundry—building on one of the cases that Watson mentions only briefly in the canon: the bogus laundry affair. (This student did his research, clearly, but ultimately opted instead to write an analytical essay about different kinds of justice in the stories.)

The student who wrote about Brexit had originally proposed having Sherlock investigate the voter fraud claims in the U.S. but then felt like setting the adventure in Britain would be better. Either way, he's been very enthusiastic about the project and mentioned at end of class (if I'm remembering the relationships correctly!) that his girlfriend's father is a big Sherlock Holmes fan and is eager to read what he produces.

I've done this in other classes in the past with fascinating results. One student in a survey course on the mystery short story several years ago relocated a Sherlock-like figure to a U.S. Army base investigating trouble at the perimeter. Though he'd never written fiction before, he'd been in the service himself and he drew on his own past as well as the readings from class to produce what I thought was a first-rate story: engaging, suspenseful, satisfying.

Students appreciate the opportunities here for a number of reasons—maybe first and foremost that it's something different. Some of them think, I'm sure, that it'll be easier than that whole thesis, evidence, analysis thing. And on our side of the table, I'll admit that my TA and I are appreciating it too—something different to read for us as well.

But the trick is that whether they choose the creative or the analytical project, students are still revealing their engagement and understanding (or lack of engagement/understanding) of the course materials. Understanding the characters, navigating the way the stories work, folding in some of the common thematic elements, even mimicking here and there Conan Doyle's singular style.... Well, there's much to be said for application over analysis. And because students opting for the creative project are still required to write a reflective essay, connecting their work to their reading, with in-text citations and a bibliography to boot, ultimately they're entering into some analysis as well.

I'm still early in the grading at this point, plenty ahead. But I'm looking forward to seeing what they've come up with—and to spending a little more time with Sherlock himself, courtesy of the students and their imaginations.
Posted by Art Taylor at 00:00