Messages in a Bottle, or Notes from the Pen

For the next several days, our band of authors will be writing about writing— for magazines, especially non-mystery magazines. We’ll have a couple of surprises and a lot of expertize. Thanks to Eve for kicking off the program with non-traditional penmanship. You'll see.
—Velma 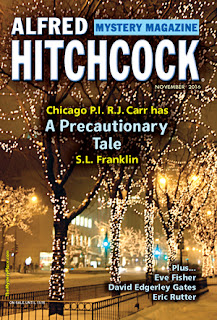 I just got back from a weekend workshop at the local penitentiary, which (as always) was full of interesting moments, hard work, and definite characters.  If nothing else, the weekend confirmed (even if I do say so myself) that I really nailed the young meth-head who's the centerpiece of my latest story, "Iron Chef", in the November, 2016 issue of AHMM.  ("He thinks he's a lady's man because he wants to get laid," and more here...)

I did not tell the guys that.  Actually, I don't tell them much about my writing, because (1) That's not why I'm there (I'm there to facilitate an Alternatives to Violence Project Workshop, not talk about myself all the time) and (2) most of them don't really want to hear it.  Including the writers.


(Sometimes especially the writers.  Recent dialog between myself and an inmate:
Me: "There's a place on-line that lists publishers and -"
Inmate (interrupting): "I HAVE an agent. Or I will soon."
Me: "Okay."
Inmate: "Yeah.")

And there are a lot of writers (and artists) at the pen.  Interestingly, I haven't met one yet that writes mystery or crime stories.  I'm not sure if that's because it doesn't interest them, or they don't know how to do it, or if they're afraid if they put anything in writing, it might be held against them in a court of law.  Like a confession or a plan for future criminal activity...  Anyway, most are poets and/or songwriters.  Some write sci-fi and/or supernatural/horror. And a few write autobiographies.

Getting prison writing published is easier than you might think, thanks to the internet.  Here are just a few of the on-line resources for magazines, newsletters, anthologies and e-zines dedicated to prisoners' writing:

One of the main problems, of course, for prisoners is that these days so many places only accept on-line submissions, and access to the internet is hard to get in the pen.  And sending out ms. in hard-copy is expensive when you only make 25 cents an hour.  (Not to mention that getting access to a typewriter is hard to come by, too.)  And almost all of the markets specifically set up to publish prisoners' work are non-paying.

In the search for paying markets, Writers' Digest is invaluable to prisoners:  I'd bet there's a (more or less) old, battered copy in every prison library.  I know inmates who've sent stories to Glimmer Train, Analog, Asimov's Science Fiction, and Playboy.  (No, I don't know any who've been accepted yet, but at least they're trying!)  I've read a couple of the stories, and even given a critique here and there. When I am specifically asked.  Again, not every inmate wants to hear any opinion other than that it's a great poem/story/song.  For that matter, not every writer OUT of the pen wants to hear anything else...

Another place where inmates writers can get published is with the PEN Prison Writing Contest. Prizes and publication in an anthology make this very prestigious.
And, for all of us, let's not forget sites like Angie's Desk and My Little Corner, both of which list anthologies and markets of all genres (although primarily mystery and science-fiction/fantasy).  Thank you, ladies!  Your hard work has opened up markets for us all!

Most of the work the inmates finally do get published is and has been edited by someone outside for content.  What gets passed around in the tier, chow hall, and our sharing circle is unedited, raw, and cannot be reprinted on this family blog.  Besides the poems of suicidal despair (since this is NOT the Gingerbread House of Corrections)

gangsta rap is HUUUUUGE.  Personally, I get bored with gangsta rap, because they all say pretty much the same thing:  ultra-explicit rap symphonies in F Major on drugs, bling, fights, arrests, killings, and sex.


(It's like the prison tattoos:  the first few times you go in the pen, you see these guys who are absolutely COVERED in tattoos, and it's hard to look away.  But after a while, you realize that they're mostly skulls, naked women, snakes, names, etc., in endless repetition, and the only reason you study them is to figure out what gang they're in.)

But there are those stories that show real creativity and thinking, and poems that take your breath away, like the following from PrisonerExpress.org/?mode=poetry

by Name Withheld by Request