Full disclosure: this post discusses politics, and might cause some of our dear readers to either clutch their pearls and bemoan the loss of civility, or seek out a Safe Space in which they can curl into the fetal position. If this describes you, feel free to skip it.

Quick show of hands: how many of you have ever heard an election referred to as a "horse race"?

Now, how many of you have heard it coming either from a political correspondent or a political columnist, or worse yet, from the lips of one of those paid political "consultants" who litter the landscape of such politics-driven "news" channels as Fox News/MSNBC/CNN?

Okay, stay with me, here.

Now, how many of you have heard the term, "political theater"? And this also spoken or written by someone who makes their living shilling for a "political product"?

Now for the pay-off.

And then there are the screaming matches-ermmmm-I mean, "political roundtables" all over the above-mentioned channels. The ones where people paid by both sides of any given political issue talk over each other with all the grace and dignity of a middle school food fight (for more of my thoughts on this variety of political animal, click here.).

I mean, I am all for loving what you do, but when political correspondents/pundits begin to talk about how entertaining it is to watch as a democratic republic goes through the laborious task of selecting its next round of leaders, I get nauseous.

Because guess what? This is not a "horse race."

It is not "theater."

It is the admittedly flawed process by which we choose the leadership of the most powerful nation on the planet. And in one particular case, it is how we select the person who will wield the most power any human being has ever wielded. Nukes do that.

If nothing else, the current *UGLY* election season has beaten the notion that this is somehow supposed to be "entertainment" right out of the heads of most sensible people. And go figure, all it took was the nomination of an "entertainer," a reality TV star, by one of the country's two major political parties to forcefully drive this point home to the nation's chattering class.

Nice to get that out of the way.

On the other hand, for those of you bemoaning how terrible this election season is, how unprecedented the coarseness of the candidates, the viciousness of the campaigns, etc., I have one word.

Does Donald Trump, by both deed and word, horrify me? The word ain't strong enough. If he actually had a chance of winning, I'd be truly frightened for our country. I find him despicable, low-brow, class-conscious, image-obsessed, misogynistic, racist, elitist, and even more of an incurious cretin than George W. Bush (Sorry Dubya. Think you're a nice guy and all, but come on...).

But this is America. We don't do anything by half-measures.

And not only has our country nominated candidates equal to Trump's low example in the past, they've been elected and held office! 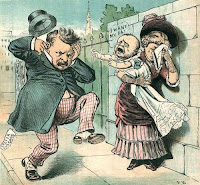 Don't believe me? Fine. Although examples of campaign dirty tricks and outright fraud (Chicago's Daley machine stealing the 1960 election from Richard Nixon, anyone?) are rife, in American history ("Ma! Ma! Where's my pa? Gone to Washington, Ha! Ha! Ha!" – campaign slogan coined by opponents of Grover Cleveland, referencing his previous acknowledgement of siring a child out of wedlock.). And America has had its share of just plain gross office holders (Another quick example: Cleveland, once in office, married the much younger daughter of his deceased law partner. Said partner named Cleveland himself as her guardian in his will! Yuck.), still, we've managed to transcend them and wind up a better, stronger, more enlightened nation in spite of them.

Take Warren G. Harding, who carried on an affair with one of his secretaries, meeting for heated trysts in the White House telephone room, right under the nose of his very jealous, domineering wife. This, when he wasn't busy losing the White House china in back-room poker games!

And when the inevitable happened, and Harding knocked his secretary up, his political handlers bribed her with $100,000 dollars stolen from Harding's campaign fund and sent her on a year-long cruise around the world.

There are other examples, like Thomas Jefferson's relationship with Sally Hemmings, and Andrew Jackson's dueling (to say nothing of the running gun-fight he had through the streets of Saint Louis with future Missouri senator Thomas Hart Benton, the Trail of Tears fiasco, and so much more. Glad they're finally rethinking having King Andrew–as his opponents dubbed him because of his perceived autocratic tendencies–on the twenty dollar bill. And let's not get started on Mt. Rushmore.). Or how about then congressman Dan Sickels' murder of his wife's lover in broad daylight across the street from the White House, use of the "temporary insanity" defense (the first successful one ever) to beat a murder charge in his subsequent jury trial, only to go on to lose a leg in battle at Gettysburg, and steal the money raised to fund a monument to him on the spot where he lost it? 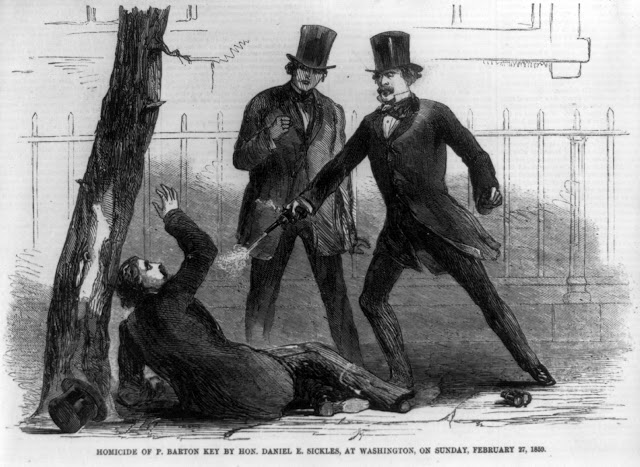 I could go on and on. But there's one guy in particular who comes to mind as an even more despicable, low-life creep than The Donald, and our country survived his coming and going.

After all, this is the country that once nominated for the office of vice-president a slave-owner who took as his common-law wife one of the slaves willed to him in his father's estate. When she died he took another of his slaves as his "slave mistress" (as if the poor woman had a choice) and when that slave tried to run away, he had her sold at auction and took her sister in her place.

Johnson was so louche, such a nut and such a wild-card, that when his boss, President Martin Van Buren ran for reelection in 1840, he dropped Johnson from the ticket and ran without a running mate.

Bet Mike Pence wishes he could pull that off.

In closing, whichever candidate(s) you support, please DO vote. At times like these, we need to make our voices heard.

If History teaches us nothing else, it ought to teach us that.

And if you actually made it to the end of this post without throwing your hands up in despair and would like to learn more about the quality and scope of previous American adventures in political villainy, feel free to click here and check out my collection of these types of stories, The Book of Bastards: 101 Worst Scoundrels and Scandals from the World of Politics and Power.
Posted by DoolinDalton at 00:20