Why I Never Met Bob Crane 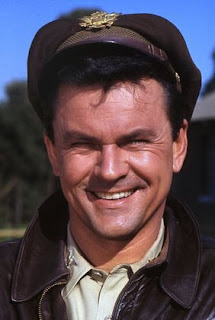 On Thursday, June 29th, 1978, not long after my fifteenth birthday, my parents told me I would be getting a late present.

The night before, they had seen Bob Crane (perhaps best known for portraying "Col. Hogan" on Hogan's Heros) in the play Beginner's Luck at the Windmill Dinner Theater about five or ten miles north of our home.  After the play, Mr. Crane came out to meet the audience, shaking hands with those who had stuck around.

My parents -- habitually about the last to leave anywhere -- chatted with him for a short time, during which they mentioned my recent birthday.  Crane told them to bring me by the theater after the play on Friday night (July 1st), so he could shake my hand and give me an autographed photo as a late birthday gift. 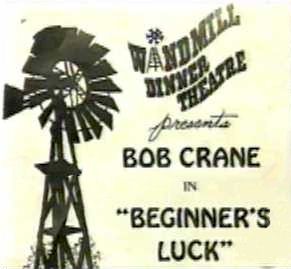 No, I don't recall him offering any free tickets.  But that's okay; I thought the idea was kind of neat. My dad insisted it was Crane's idea, telling me, "He actually seemed to be a nice guy, son.  He says he's looking forward to meeting you, and he sounded as if he meant it."  Then he joked, "Of course, he could just be a good actor."

I enjoyed Hogan's Heros and looked forward to meeting him -- secretly hoping one of the women who played one of the bar maids on the show might somehow be there too.  (I was a fifteen-year-old boy, after all, and had no idea that he had married one of them.)


Such, however, was not to be. 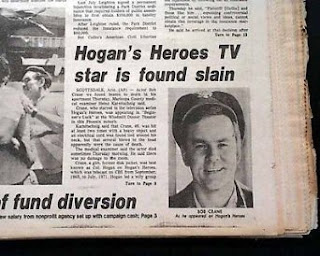 That evening, the Phoenix Gazette carried a story: earlier that afternoon, Bob Crane had been found murdered in an apartment not far from where we lived.

He was murdered in the early morning hours, his skull crushed by a camera tripod as he lay sleeping in bed, and an electrical cord tied around his neck later -- all this, only hours after speaking with my parents.

His body was found by Victoria Berry, his costar in Beginner's Luck.  She went to find him around 2:00 pm.  When Crane didn't answer her knock on his door, she picked up his newspaper and entered his apartment.  The lights were off, with the drapes drawn, and she had just come in from the bright sun. Nonetheless, she says she closed the door after entering the apartment, then she looked around for him.

His body lay on the bed in apartment 132-A, at the Winfield Place Apartments.  Berry told police: "... At first, I thought it was a girl with long dark hair, because all the blood had turned real dark.  I thought, 'Oh, Bob's got a girl in there.  Now where's Bob?...'  I thought, 'Well, she's done something to herself.  Bob has gone to get help.'  At that time, I recognized blood ... "

Then she looked closer.

"The whole wall was covered from one end to the other with blood.  And I just sort of stood there and I was numb.  Bob was balled up into a fetal position, lying on his side.  He had a cord around his neck which was tied in a bow."

While Victoria Berry was giving her report to the police, inside the apartment, the telephone rang. Police asked her to answer it, but not to reveal that Crane had been murdered. The caller was a video production salesman named John Carpenter.

When Lt. Ron Dean of the Scottsdale Police Department took the phone, identifying himself, he told Carpenter there had been "an incident," but not that Crane was a dead. Carpenter called back, later, and spoke to Lt. Dean again.  The detective was surprised that Carpenter never asked what the "incident" was that police were investigating in Crane's apartment, or if he could speak with Crane.

In 1978 the Scottsdale Police Department did not have a Homicide Unit, something often overlooked in articles about this murder.  However, this fact was very shortly on the mind of everyone in Scottsdale, because the investigation didn't seem to be getting anywhere.  And, at least one piece of potential evidence -- an album of pornographic photographs that Berry had seen when she arrived -- had disappeared! 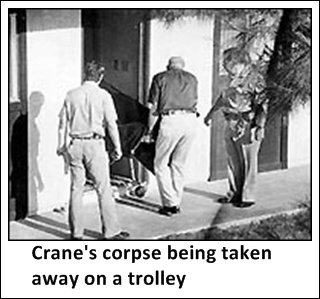 Surprising evidence also began to surface. Police found about 50 pornographic video tapes or films in the apartment, along with video cameras and film cameras.  A bathroom had been turned into a darkroom with an enlarger, and there were photos of a nude woman on negatives inside.

Reports soon circulated about Crane's fetish of filming himself having sex with multiple women. Police learned that he had obtained the equipment for this hobby from Carpenter, and that Crane had told family members that he planned to break off his friendship with Carpenter on the day of the murder.  The two men were last seen together at the coffee shop in the Safari resort around 2:30 that morning.


Several potential suspects also came to light: Crane's angry estranged wife, husbands angry about Crane bedding their wives, even a fellow actor who had threatened him in Texas.  But, police continued to focus on Carpenter.

Scottsdale's lack of a homicide unit may have made its mark, however, as Carpenter was not put on trial until 1994!  Carpenter was acquitted after a two-month trial, and died four years later, still maintaining his innocence.

As for myself: I never got to meet the guy, because he was murdered the day before I was supposed to.

Some story, Dix! Did you have nightmares?

There is a wonderful book called I, WITNESS, all essays by mystery writers about their brushes with true crime. An astonishingly large number of them went to school or lived ext to, kidnap victims as kids. Seems to lead certain people to our genre..

I remember the Bob Crane murder - and how no one was ever caught. I didn't know that anyone had ever been tried, but I'm not surprised that Carpenter was acquitted so long after the murder. Weird, weird, weird.

As you probably know, there's a movie called Auto Focus (2002) about Crane's life and death. Greg Kinnear does a pretty good job of playing Crane, and Willem Dafoe plays Carpenter. Not sure how much of the movie is true, but it's entertaining.

Fascinating story. Thanks for sharing it!

Sorry to be incommunicado for most of the day. I took the wife and kids to the opening of the new Star Wars film at 2:00 o'clock this morning, then had to sell windshields from 6:30 to noon (after which, I reeled around the house like a drunken zombie! LOL)

Richard, I'm glad you found this interesting. Hope to see more of your comments on this blog in the future.

Thanks for mentioning the film, John. I'd heard about it, but never seen it. Think I'll take a gander, since you say it's entertaining. I don't know if you're aware, but Crane's son, Robert, and Christopher Fryer wrote a book -- published this past March by the University Press of Kentucky -- entitled: Crane: Sex, Celebrity, and My Father's Unsolved Murder. I thought I might watch the movie after reading this book, and compare notes.

Eve, I agree. The entire thing struck me as being quite weird -- even at the time. I mean, my parents had seen him THAT NIGHT, then he was murdered only a few miles from our home, and I still remember everyone talking about our police department needing to modernize and grow in order to solve crimes of this nature.

LOL No, Rob; no nightmares here. I'd imagine Victoria Berry had her share afterwards, however. I'll have to check out I Witness. Thanks for the tip!

Dix, an amazing story! I've seen "Auto Focus," and I highly recommend it! Kinnear is actually wearing the jacket Crane wore when they recreated the "Hogan's Heroes" scenes. It says a lot about Crane's talent and considerable charm that I can enjoy his performances knowing what I know about his being a [expletive deleted.]

What a story, Dixon. What a decision for your parents to tell you. Definitely one of the closer brushes with death.

Hi Dixon - I'm the author of Bob Crane: The Definitive Biography, which was published on September 17, 2015. Bob Crane was indeed a nice guy and a good person, as told to me and my two coauthors by 200 prominent people from his life (including daughter Karen, son Scott, several first cousins, close friends as far back as grade school, and colleagues in radio, television, theatre, and film). You can learn more here: http://vote4bobcrane.org/book.html I urge you and anyone who wants to understand Bob as a complete and whole person and learn about his entire life, from birth to death, to read it. All author profits are being donated to various charities in Bob Crane's memory. -Carol Ford