As you may know, last time I wrote about how Mom reads my books now. It only seems fair to talk to you this week, even though we haven’t spoken since 2008. So, how’s it going? 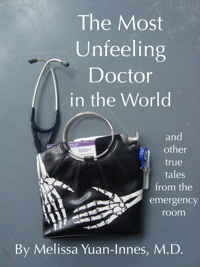 I’ve been concentrating on mysteries lately. I find them satisfying because you can describe the ugliness in the world and bring a bad guy to justice. Since I work in an emergency room, I see a lot of illness, and not a lot of justice. Nice people get cancer. Sometimes nice people die. Meanwhile, a patient punched one of our nurses in the face and another patient attacked a different nurse with a high-heeled shoe. I’m having trouble finding the links, though, because there was an even more dramatic story about a patient hit a third nurse with a metal bar while uttering death threats.
Don’t worry, though. I feel pretty safe. We do have security guards, and I see at least one concrete change: we now have posters on the wall saying that we have a zero tolerance attitude toward violence. I hope the criminals can read.
It’s funny. I know you and mom always approved of me going into medicine because it’s considered a safe career. Much safer than writing, which is considered pretty much equivalent to committing hara-kiri. But now that I think about it, medicine is far more dangerous. You spend years abusing your brain and body, inhaling as much information and working as many hours as possible, exposing yourself to flesh-eating disease and felons, whereas a writer…sits in a room and makes stuff up.
True, writers earn less money on average, and poor people tend to get sick. This article even mentions that almost half of poor children have witnessed a killing. 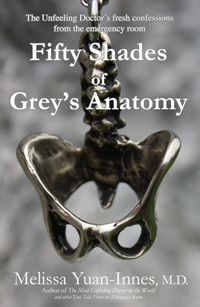 Still, I remember reading articles saying that most doctors discouraged their children from becoming physicians. The articles slid right off of me as a medical student. I was young. I was excited. I was going to be a doctor!
But now, when my four-year-old daughter says, “I want to be a doctor,” I’m thinking of the deregulated medical school tuition and fees alone that cost up to $24,000 per year. I’m thinking of how much she loves babies (already, she walked around Sears, choosing which carriage and crib her baby should have), and how hard it is to balance children and medicine. And I understand why this survey showed that nine out of ten physicians discourage anyone from entering medicine.
I guess that’s why my other moniker is The Most Unfeeling Doctor in the World.
Anyway, I’m not sure what you think of my writing. The most reaction I got out of you was when I brought you and mom to the joint book launch for Island Dreams: Montreal Writers of the Fantastic and Open Space: New Canadian Fantastic Fiction, and you were astonished by the free food and drinks. “Who’s paying for this?” you asked afterward.
I wasn’t sure myself. That’s a mystery, too.
But not as much of a mystery as what you’re up to now, after fighting a high-grade glioma for 18 months before succumbing in May 2008. I’m agnostic, but part of me wants to believe that somehow, you know you now have four adorable grandchildren and that I still love you.