Playing in the Shallows

We all love profundity, heartbreak, piercing stories of love and loss and heroism, and some of us aspire to write them. But fortunately there is also the category of guilty pleasures, encompassing what used to be called “tired businessmen’s entertainment.” As far as television mysteries go, I refer to the pleasant shallows of predictable scripts, familiar characters, and faintly absurd premises.

NCIS, the most popular show on television as my husband reminds me, is strong on all three. Every week, the Marines and or the Navy takes a substantial hit to its personnel. If the show continues with its LA franchise, and opens, as planned, an NCIS New Orleans, I doubt we will have enough manpower to staff our ships.

Of course, the NCIS corps of detectives is charming. The cases ingenious. The action sporadic but exciting. But what I think really draws the public is the fantasy element: the smooth working of every conceivable technology from CCTV to the multitude of data bases at the fingertips of the clever NCIS techies.

Who hasn’t gotten lost in the wilds of cyberspace or wasted endless time in searches that go nowhere. Not the folks at NCIS. A photo or a license number or a blood type gets tapped in; almost instantly the screen blossoms with a complete dossier or photos of the getaway car or the crucial piece of information that links a drop of blood to – voila– some arch-villain of the terrorist persuasion. This is the sort of fantasy that writers, at least, can really enjoy.

At the other end of the spectrum is a guilty pleasure of my own, the British ITV import Midsomer Murders. Once again, the plots are complex, and if the cast is maybe less interesting than NCIS, the scenery – stately homes, thatched cottages, trout streams and woodlands– is considerably better. Besides, Midsomer Murders goes to the heart of the matter: the victims will generally, as the Lord High Executioner was wont to say, “not be missed,” while the killers are even less fetching. No pity needed!

And this is why, despite the fact that nearly every episode begins with either someone walking in the night forest – never to emerge alive again; or with an early morning walker out with a keen-nosed dog – soon to discover the latest corpse, the villagers continue to tramp the woods and venture out alone on lonely paths in the dark of night.

Worse yet, the locals continue to hold those most dangerous of human gatherings, the village fete. We didn’t expect anything better than a string of killing from the Film Festival which attracted outsiders and theatrical outsiders at that. The Literary Fest was almost as bad; the star attraction coming from London and literary feuds being notorious for their viciousness, but still the body count was more than even the most pessimistic organizer could have imagined. 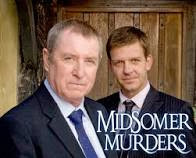 We did, however, expect that the annual Garden Fete, featuring as it did innocent horticultural pleasures would prove harmless.

Not a chance. Gardeners were bumped off almost before the flower judging began, while both the Music Fest and the Midsummer frolic laid waste to multiple victims, some in the latter with ancient Celtic implements.

When even archeology is against you, there’s as little chance of survival in Midsomer as in NCIS’s supposedly more gritty urban D.C. But then neither show is realistic, despite the country charm in one case and the technical hardware in the other. Both deal with another commodity, an undemanding predictability. Lets face it, there are days then the shallows look pretty enticing.
Posted by Janice Law at 01:42