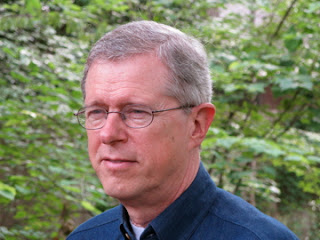 It's no surprise that such notoriously hard to crack writers' markets as Alfred Hitchcock Mystery Magazine, Ellery Queen's Mystery Magazine, The Saturday Evening Post, The Strand, and Woman's World keep gobbling up John Floyd's short mystery stories. His latest collection, Fifty Mysteries: The Angela Files (Dogwood Press, 2014), is no exception. The simplicity of these stories is deceptive. (It's no coincidence, perhaps, that his last collection was titled Deception.) They slip down as easily as a crême brulée: smooth as silk, but it's got plenty of flavor and crunch, and it leaves you wanting more.

The stories in Fifty Mysteries, almost half of which first appeared in Woman's World, avoid many of the tropes that crime fiction relies on. These fifty stories about the cases of Sheriff Chunky Jones and his former fifth-grade schoolteacher, Angela Potts, can't be called page-turners, because they're only seven hundred words long, not counting the solution to the mystery of the embedded clue. The protagonists are not psychologically tormented or even flawed, unless you count Sheriff Jones's figure ("Don't call me Chunky.") The stories eschew graphic sex and violence. They aren't long enough to twist or develop subplots or relationship arcs. Yet each one is a gem that has all a successful mystery needs: the elegant structure of crime, investigation, and fair-play solution, a setting that manages to be fully realized without many explicit details, and two extremely likable protagonists. The sheriff provides the cases, and the clever and observant Ms. Potts solves them. 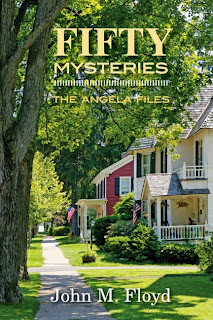 John Floyd sketches a sleepy Southern town where everyone has known everyone else all their lives, and villains, bullies, victims, and the law all did their time in Angela's fifth grade classroom. Like a Chinese or Japanese brush painter, he achieves his effect with just a few strokes. Roscoe's Cafe: "Banjo music blared from a radio behind the counter" and Angela teases Roscoe about being "an extra in Deliverance." An escaped prisoner's grandmother's living room: "The old lady...took a seat in an overstuffed chair--on the table beside it were a teacup and a half-finished knitted potholder--and directed Angela to a second padded chair. The sheriff pulled up a footstool..." A scenario that would never occur in a big city: "Young Jeffy had crashed his pickup into the Civil War statue on the courthouse lawn in the wee hours and was now sleeping it off as a guest of the county."

Each of these elegantly executed flash stories is a solve-it-yourself puzzle, and the book's format discourages cheating by providing the solutions in a separate section at the end. I opened the volume with some trepidation, afraid I would find that Angela Potts is smarter than I am. To my relief, I was able to solve most of the mysteries without peeking--but by no means all of them. John Floyd is a pretty smart guy himself. May he never run out of puzzles--and I bet he won't--and may Ms. Angela Potts live forever--and I bet she will!

John Floyd's short stories and features have appeared in more than 200 different publications. A former Air Force captain and IBM systems engineer, he won a Derringer Award in 2007 and has been nominated three times for the Pushcart Prize. John is also the author of five collections of short mystery fiction: Rainbow's End (2006), Midnight (2008), Clockwork (2010), Deception (2013), and Fifty Mysteries (coming in October 2014). He and his wife Carolyn live in Mississippi. More information about John and his writing can be found at www.johnmfloyd.com.
Posted by Elizabeth Zelvin at 00:01