In my last post, I compared rappelling against fast-roping.  Both of these are infiltration (INFIL) operations.

People seemed to like the article so, thinking that some among you might be cooking-up suspenseful cloak and dagger novels in those writerly brains of yours, I thought I might discuss some methods of exfiltration (EXFIL) this week.  True: I used these techniques in the military.  But, intel agents or spies can use them as well (see the CIA link below). There is no law preventing this.  :-)

These days, due to our current ability to refuel certain types of helicopters (particularly SpecOps birds) in the air, helicopter EXFIL is quite commonplace.

Commonly, the chopper just lands and picks the person or people up.  At other times, the helicopter can't land: such as in forested or jungle areas, on steep mountain sides, or from building roofs festooned with tall antennae.  In such a situation, a SPIES rig or some other method may be used.

Evidently, this can be called a "SPIES rig" (pronounced: speeze rig) or a "SPIE rig", but I learned it as a SPIES rig, and will address it as such.

SPIES supposedly stands for "Special Patrol Insertion Extraction System," but don't quote me on that.

The system is pretty basic: A line is lowered from the hovering helicopter, personnel wearing Swiss seats (or other harness types) hook into the line with a snap-link, and the helicopter takes off, dragging these folks through the air.  Eventually (hopefully!) the pilot spots a place where he can lower them to the ground.  They then clear the helipad, and the pilot lands the helicopter.  After which, the team members who recently acted as "dopes on a rope," now climb into the chopper, which flies away. 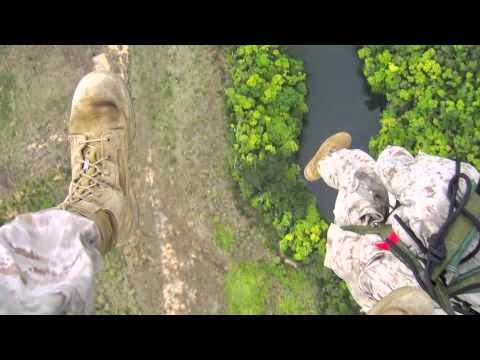 In these photos, the operation is presented from slightly different angles.  Arms and legs are not extended just to look stylish.  They're used for stability, in order to help prevent twisting in the wind -- which is very important if you don't want to lose your lunch.


I used to think getting air sick on a SPIES line was the worst fate a person could suffer. Then, however, I learned the truth: The worst fate is to suffer through the guy ABOVE YOU, on the line, getting sick! 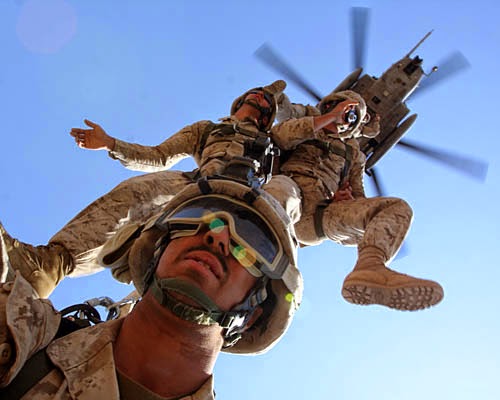 The SPIES rig can be as simple as this fast-rope (below) with those white hook-lines woven in.  A rider just snap-links into the hook-line, and enjoys the ride -- which can make a person feel rather like Super Man!

STOL
When a short -- VERY short! -- relatively flat spot of land is available, but a helicopter is not, Short Take-Off and Landing (STOL) aircraft can be used.  The pilot lands; the team jumps on; the pilot flies off.  These aircraft are quite small and very light.  You can't cram more than five or six guys, plus their gear, onto one aircraft.  Well . . . you can cram more guys in, but I don't think you'd ever get off the ground -- though I have seen these planes  carry a surprisingly heavy load at times.

If you read the CIA paper below, which mentions mail-operations, you may like to know that SF uses that type of mail drop also, and we used these planes to do it.


Additionally, the MC-130 Special Operations aircraft is capable of great range (which may be further augmented by aerial refueling), landing on a relatively short airfield, and using "Rocket Assist" to make short take-offs, as the MC-130 may be outfitted with rockets on the sides of the fuselage.  I can attest that the near-instant acceleration of a rocket-assisted take-off makes for one heck of a ride.

Skyhook, or the Fulton Extraction System, developed in the '50s and '60s, is undoubtedly the most spectacular EXFIL method I've ever seen.

Though aerial refueling of helicopters may seem to have rendered this practice obsolete, the system may still be in operation today, as I found an online pic of an MC-130 with the tell-tale "hooks" on its nose, but was unable to gain permission to post it.  I do know it was still available for use when my A-Team trained with the Special Operations Air Wing in Florida, around 1992.  At that time, however, humans were not permitted to be extracted during training missions.  Hence, we used a dummy instead.

a. A container is parachuted to the team/individual on the ground.

b. The team/individual opens the container and removes a rubber-insulated suit with hood, about 500
feet of braided nylon cord attached to a deflated "blimp" about six feet long, a tank of helium, and sometimes two telescoping poles (for use if suitable saplings are not available for easy cutting). [Note: The suit is insulated because the aircraft, when it strikes the cable, may impart a tremendous electrical shock to the system -- reportedly due to the aircraft's creation of static electricity -- which would otherwise give the rider a nasty jolt.]

c. The person being extracted dons the suit, while poles are erected and the nylon cord is run through in a loop, then hooked to the shockline hook on the suit.

d. The "blimp" is inflated and permitted to rise in the air, as the suited person sits on the ground, back to the poles.

e. A plane, with the hook (what look like scissors) attached to its nose, flies along and catches the nylon cord (hanging from the blimp, and attached to the suited fellow on the ground).  It catches this line about 450 feet above the ground.

f. The line jerks tight, and the suited person rises rapidly, to fly away, sailing through the sky behind the aircraft.  Meanwhile the aircrew, back by the aircraft rear ramp, are securing the line, as it runs beneath the fuselage, with a long hook.  Once they capture the line, they hook it to a winch and reel-in the fellow on the far end up to the open ramp.


The "victim" tries to keep his/her arms and legs out, and his/her back toward the aircraft, while flying, in (what is sometimes a vain attempt) order to prevent him/herself from spinning or oscillating in the aircraft's wake.  Being reeled-in can take up to ten minutes, and be extremely disorienting.  In fact, it is reported that parachutes were once issued to the person being extracted, but this practice was halted, because the "extractee" feels as if s/he's falling the entire time s/he's being reeled-in.  Once the extractee arrives in the aircraft, aircrew grab the new passenger on both sides, and strap him/her down before releasing the new passenger and confirming that the mission has been successful.  (It's my understanding that some disoriented personnel have accidentally walked off the ramp while the aircraft was flying, when this was not performed correctly, and that this is why humans are not permitted to be used as "training dummies.")

You can see the system used on film, if you watch the movie The Green Berets, or you may read a CIA paper, about Skyhook's use in an intel operation HERE

This is probably enough for now.  If you like learning about this stuff, let me know.  I'd be happy to write about driving a Zodiac rubber assault boat into a sinking CH-47 Chinook helicopter, in the middle of a dark night, next time, if you'd like.