Ruminations of a Senior Citizen


by John Floyd
NOTE: Please join me in welcoming my friend Herschel Cozine as our guest blogger.  Herschel is well known to the writers and readers of both SleuthSayers and its predecessor, Criminal Brief, as an accomplished author of short mystery fiction. His credits include AHMM, EQMM, Woman's World, and many other publications, and his book The Humpty Dumpty Tragedy was nominated by Long and Short Reviews for Best Book of 2012. (I'm currently on the road and will be back in two weeks--meanwhile, I've left you in good hands. Herschel, thanks again!)
-- John Floyd

In the past few months several of you have commented on the fact you are getting old. Not fifty or sixty type oldies. Let's face it, that's kid stuff. We are talking "old." It should be a four-letter word. Maybe that's why the British put an "e" on the end. On the other hand, with age comes wisdom, or so the saying goes. Speaking from personal experience, I question that. Some people never learn.

But that is not the purpose of this discussion.

I have a birthday looming on the horizon. Another one. That's the third one this year, or so it seems. I suppose I should be grateful. After all, studies have shown that birthdays are good for you. The more you have the longer you live. But I'm at a point in my life where they start to hurt.

I have a T-shirt that reads: "I plan to live forever. So far, so good." An old Steven Wright joke. But at times I feel I have accomplished that goal.

There is no polite way to put it. I am an old man. It certainly is nothing to be ashamed of. It happens to everyone if they are lucky. But it is a sobering time of life, a time when one comes face to face with his mortality. I recently had a financial guru give me a tip on an investment that would double in value in five years. I turned him down. I am no longer a candidate for long term investments. 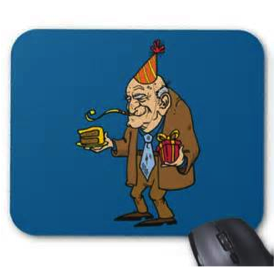 What has that to do with writing? When I was young and innocent--well, young anyway--I had the irresistible urge to write. As fellow writers, you need no explanation. But I didn't write for any specific market or, for that matter, for any market at all. I wrote because it was something I had to do. I got a certain amount of recognition for this hobby, or whatever word you care to use, when I was in high school. Class writing projects in English usually resulted in my effort being used by the teacher as a model. One of my class projects found its way into the yearbook. It felt good to get this recognition, but in high school no self-respecting boy would admit it. A football hero? Yes. Drag racing champion? Certainly. Writer? Are you kidding me?

Eventually, after college, I was told by someone that I should try my hand at writing for--how crass--money. I had been writing poems and stories for children, but never submitted them to magazines. The thought was intriguing. I found an ad in a writing magazine about a contest being sponsored by the Society of Children's Book Writers. First prize was $100, a princely sum at that time. I had just completed a children's story, in verse. So I typed it up, put it in the standard package of the day--a manila envelope--and sent it in. Lo and behold, it won!

I was hooked. For several years I wrote and sold a fair number of poems and stories to the children's magazines of the day. But, being a big fan of adult mysteries, I eventually turned my attention to writing them. My first success in that arena was a Department of First Stories sale to Ellery Queen.

I won't bore you with any further successes and failures. I have had some of the former and more than my share of the latter. I mention them only as a prelude to what I really want to say.

I have reached a stage in my life where writing for money is no longer important. Oh, I won't turn down a check if some editor wants to buy my story. But this is now merely a fringe benefit and not the main purpose for continuing to write. (Come to think of it, it never was.)

What is important to me is to have the respect of those who take the time to read my efforts. I particularly cherish the recognition afforded me by other writers. They, after all, are fellow travelers who know and appreciate the slings and arrows of this business. They have hit the same bumps, felt the sting of rejection and the giddiness of acceptance. You, my friends, matter. 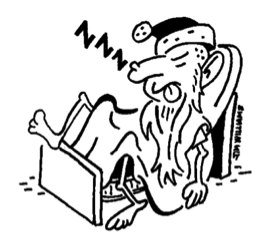 As I said in the beginning, I am an old man. I no longer write with the fervor and eagerness of youth. Ideas that used to come in torrents now dribble in grudgingly. I continue to write. But it is not the same. I am more critical of my work, often deleting it after several attempts to make it work. But enough of it remains to keep me going. And that will never change. I don't question why. All I know is that I am a writer; whether a good one or not I leave for others to decide. But a writer--a true writer--cannot quit. To paraphrase, neither sleet or snow or dark of night, or old age, will keep a writer from his word processor. And now to bed.

NOTE: A special thanks to Jim Williams, a lifelong friend, for his cartoon. In addition to being a cartoonist, Jim is a fellow writer. His book, Cattle Drive, published by High Noon Press, has just been released and is available on Amazon.
Posted by John Floyd at 00:01