Last week, we returned from an eleven-day pleasure cruise in the Caribbean. All of the port stops along our route can be considered as warm places to get out of snow country during the winter months. We went for the fun, relaxation and pampering you get on a cruise ship, plus the chance to visit places we hadn't seen before. But, being a writer of crime and criminals, I naturally sought out some of the darker side at each port of call.

Our departure was from a large pier in Ft. Lauderdale at an entrance to the Inter Coastal Waterway. But since Leigh does such a good job at exposing the seamy underbelly of Florida, I will leave reporting on this area to him.


Aruba is a flat, sandy island about six miles wide by twenty miles long, located approximately seventeen miles north of Venezuela. Due to its arid climate, the island has to produce its own water via a desalination plant, thus water is very expensive, as is electricity generated by the same plant. According to our tour guide, only the rich Americans and the thieves can afford swimming pools. Thieves being defined as politicians in the Aruban government. None of the local's houses had green lawns for a yard, only sand and cactus. Yes, the one golf course was green, but this was a result of recycled waste water from the resorts and if you were in the know, you waited for the course to dry before moving around on it. 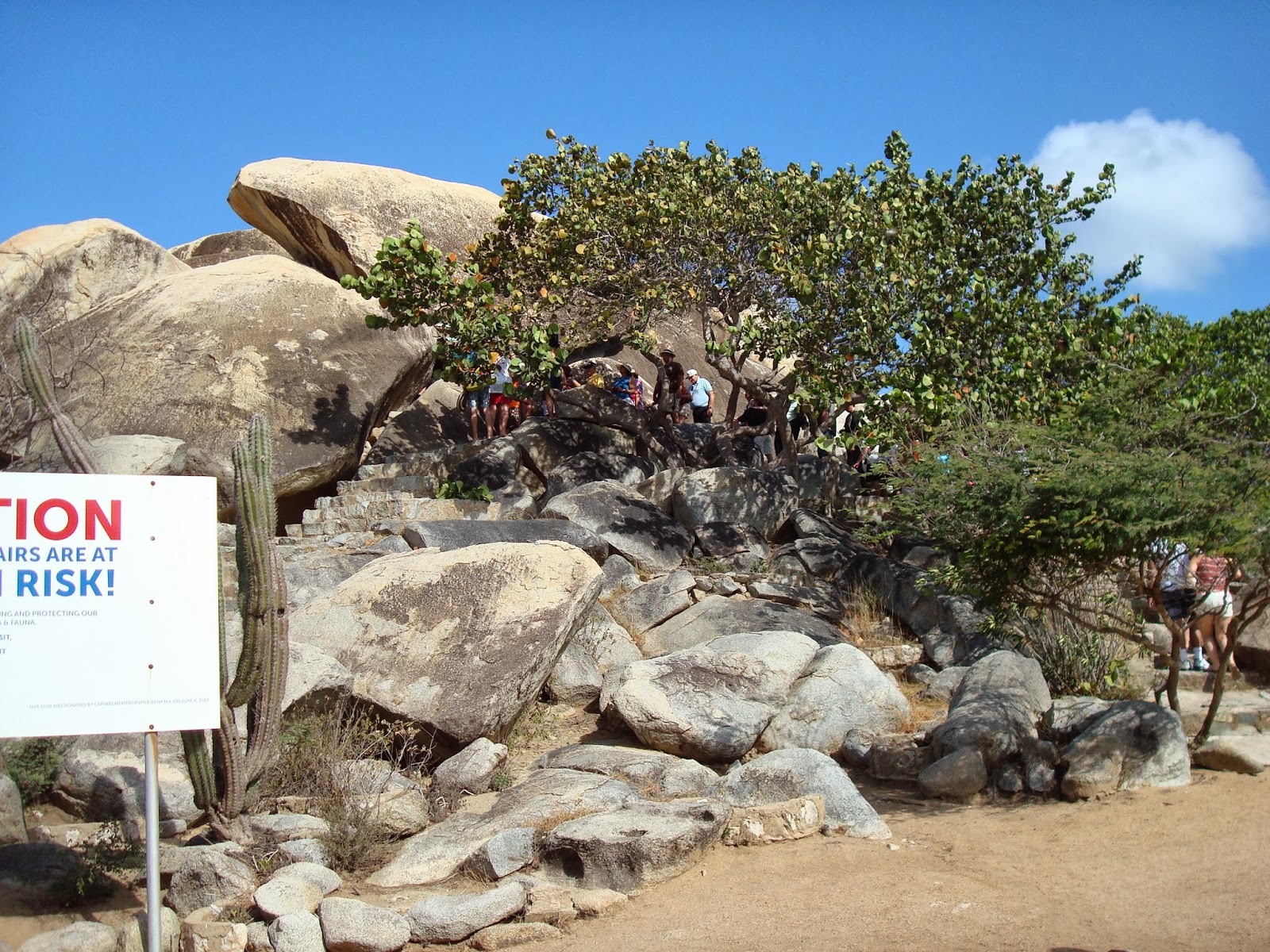 The resort area, the white sand beaches and the clear waters of the ocean were beautiful, therefore it was interesting to talk to those fellow passengers who had only seen that small part of the island. They were the ones who wanted to return to Aruba for an extended vacation. Those of us who had seen the full island weren't so sure. Tourism is Aruba's main source of legitimate income, but once you've seen a large rock hill (remember this is a flat island), a naturally formed stone bridge (there were two, but the other one collapsed nine years ago) and the California Lighthouse (named after a ship that ran into the island), what's left is the resort area and the beaches.

To mingle with some of the locals after the tour concluded, four of us went to Iguana Joe's for beer and nachos. It was much like any warm climate bar with open air seating, plus it was located on the second floor where patrons could watch people and traffic moving on the streets below. Found out too late that the local Starbuck's had free wi-fi for those who made a purchase.

The first settlers of this island were the Caiquetios, a branch of the Arawak Indians, who sailed over from Venezuela about two thousand years ago. They were followed by the first tourists in 1499 when Spanish explorer Alonso de Ojeda laid claim to the island for Queen Isabella. Guess you could say he was the first thief on the island. He named the land Oro Hubo, which meant there was supposed to be gold on it. The Spanish soon left and the island changed hands several times before the Dutch ended up with it.

During the time period when the Spanish conquistadors were looting Mexico and South America and sending all that gold on ships back to Spain, pirates and privateers decided that Aruba made a good base to hide out between raids. You could say they were the second set of thieves.

In more modern days, the island has continued as a smuggler's paradise, dating this occupation back to colonial times when it was used to avoid taxes from the Spanish monopoly. For instance, Aruba was the most important exporter of coffee, however there are no coffee plantations on the island. Cigarettes and whiskey were other major exports. Appliances, perfumes and other items were smuggled to Venezuela and Colombia. Once, when a large refrigerator was being swung over from the dock to be loaded on a ship headed for Colombia, the refrigerator suddenly opened and a cache of guns fell out on the wharf. They were immediately picked up and no official mention was made of the incident.

One Aruban politician signed a residence card for a Colombian cartel member so he could live on the island. Money was invested. A scandal ensued, but that politician later became Prime Minister for Aruba. Go figure. The cartel member later visited the island anyway without problems after the residence card was subsequently rescinded. No wonder our tour guide referred to the Aruban government as Ali Baba and the Forty Thieves.

Still, we had a good time on Aruba and do not regret having made this port of call.