The Straw That Stirs The Drink

Don't let the title fool you, I'm not talking about Reggie Jackson (which is who I lifted this line from). Rather, today I'm going to talk about the prime mover in most any work of fiction- the antagonist.

In other words, let's talk "villains."

In my own work over the years I've had to do a fair amount of wrestling with the notion of what constitutes a "villain," and of course I've read the thoughts of others on this. The list of sources I've got on this subject includes but is no way restricted to: Christopher Vogler, Alexandra Sokoloff, James Scott Bell, James N. Frey, Donald Maas, and Stephen King, just to name a few. So going forward, my thoughts as expressed herein are my own, but any credit for originality of thought on this subject likely goes to one of the folks listed above, and anything that stirs up violent disagreement amongst any and all who read this should fall squarely at my own doorstep.

Point the First: The Importance Of The Villain.

Without question the villain is the second-most important character in a good story, nearly as
important as the hero/protagonist. Some of the folks I've credited above even maintain that the entire creative process behind a good story must begin with the creation of the villain. Either way, to be truly effective the villain must be fully-realized, well-drawn, and pretty much the mirror-image of the hero.

That last part is important. If you can work it so it seems that your hero and your villain are two sides of the same coin in some ways, Thesis and Antithesis, Yin/Yang, you've got the beginnings of a truly compelling story.

And just like it's crucial to have a protagonist your readers can relate to (whether or not they like him, are sympathetic to his situation, etc.), it's equally important that your villain/antagonist and his goals/reasons for doing what he's doing are believable. Even if it's a crack-pot idea to build a Dr. Evil-type of doomsday weapon and extort money from the governments of the world, it doesn't have to be plausible that the scheme would work, so long as it's plausible that this villain would believe that such a scheme would work. So it's pretty much a rule of thumb: the more improbable the villain's plans, the harder you as the writer must work to make it clear that your villain absolutely believes that he can and will prevail in the end. If you can establish that, you're on your way.

Next all you have to do is write the hell out of your story such that your villain very nearly succeeds. So again, the more improbable the villain's plans, the harder you have to work to make all of this come together.

What happens if you don't?

You could very well wind up with a villain who falls into one of two particular types. Either a cartoon villain or what I call an ubervillain.

Cartoon villains are exactly what the name implies: one-dimensional cardboard cut-outs of characters with no real feelings, no depth, no self-doubt, nothing but palm-rubbing elation at the thought of doing evil somewhere, anywhere, to anyone, but most especially to (insert name of your protagonist here). And you just know they're planning to victory dance all the way home afterward, rubbing their palms and cackling, waylaying widows and orphans for rent and lunch money along the way.

If this type of character appeals to you, I suggest you devote yourself to more time spent with the Cartoon Network.

As for the ubervillain, you know the type: the guy who is so good at what he does, such a chess
player, so meticulous and brilliant, that for a good 245 pages of your 250 page novel, he's out-thinking your protagonist every. step. of. the. way.

I'm sure others will disagree with me here, but I find ubervillains even more tedious than the one-dimensional cartoon variety. Not least because they're even more improbable to find in real life.

Look, because of my day gig, I know a ton of really smart people. And among those smart people are a fair number of folks who are flat out, impressively, couldn't hide it if they wanted to brilliant. We're talking full-on genuises, here, including some chess champions.

And every one of them is a deeply flawed human with weaknesses, blind spots, vanity, prejudices, etc., that cloud their ability to do everything all the time exactly perfectly. No human being can have that fool-proof a run of luck. Not. One.

And what's the one cardinal sin we as authors must never commit? Like Oscar Wilde in his prime, we must never be boring. But don't just take my word for it. Let me give you a couple of excellent examples from two different yet thematically similar televisions series that have revamped a beloved fictional detective and updated his story for the modern day.

And for the purposes of this discussion, also about his arch-nemesis: Professor James Moriarty.

The otherwise excellent BBC update, Sherlock, completely drops the ball when it comes to updating Moriarty's character. The modern day Moriarty is an ubervillain to trump all ubervillains. Not only does he out-think Holmes at any number of junctures, he has him in his sights (literally) from the first time they officially meet. He even (SPOILER ALERT!) fakes his own murder, committing suicide and perfectly framing Holmes for the crime.


Balance that against NBC's surprisingly superb Elementary, and there's no basis for comparison. In Elementary, with Sherlock Holmes (played to the hilt by Johnny Lee Miller) a recovering heroin addict (sounds cliched, but boy do they make it work) relocated to New York as part of a deal with his wealthy, absent father, working with a female Watson (seriously, I didn't know Lucy Liu had this in her!). This Holmes was driven to heroin by remorse over the murder of the only woman he ever loved: Irene Adler.


And just who was responsible for Irene's murder?

Yep, you guessed it. A shadowy figure, spoken of (if at all) only in hushed tones, known by the name of Moriarty. Holmes is convinced of this. And he's right.

Because as it turns out at the end of season one (SPOILER ALERT REDUX!) Irene is alive! And it appears that she's been taken captive by Moriarty!

Needless to say, the discovery of this plot point turns the carefully recovering Holmes' world upside-down.

Turns out appearances are deceiving.

Irene wasn't kidnapped by Moriarty. She is Moriarty (watch it, seriously. It's brilliant how they layer all of this stuff together). Holmes being Holmes soon uncovers this, and then it's really on. Turns out that Moriarty, intrigued by the possibility that there might be someone out there just as exceptional as herself, created the identity of Irene Adler, at first just to get close to Holmes and study him. But she stays (for a while) because she falls for him. That scares her. She bails, only to turn up later where Holmes can easily (for him) find her in New York.

And when, after a see-saw back-and-forth, this plotline plays out to its inevitable conclusion with a final confrontation between the two of them, Holmes and Moriarty, Thesis and Antithesis, at her moment of apparent triumph, Irene admits what Holmes had already surmised and used against her: that he was her on-going, never-get-past-it, completely captivating weakness.

The writing and acting in this completely sell this plotline. AND it buttresses the earlier assertions about the best villains being grotesques, mirror images of the heroes they face.

Point the Second: Does Our Villain Actually Know He Is The Villain?

In Paradise Lost the great English poet John Milton famously put the following words into the mouth of the fallen angel Lucifer as he is being cast down into the pit (and equally famously echoed, if indirectly in the "Spaceseed" episode of the original Star Trek by Ricardo Montalban's character Khan Noonien Singh):

"Better to reign in Hell, than to serve in Heaven."

This single line provides the reader with such a wonderful insight into the mindset of "God's antagonist," Lucifer. He does not see things God's way (obviously), hence their conflict. In fact it's pretty obvious that from Lucifer's perspective, he's the aggrieved party, not the Almighty, and by association, Mankind.

And since the reader is ostensibly on God's side, the reader sees Lucifer as the author of the troubles between himself and the Almighty. Milton hardly takes Lucifer's side, and he certainly does not excuse the fallen angel's actions.

But what he does do is offer insight into our antagonist's viewpoint. In the antagonist's mind he's not a "bad guy." He's "misunderstood." He's a "rebel." The Good Guy is a "tyrant." "Someone has to stand up to him," and so on and so forth.

This sort of insight can only help make your "antagonist" more well-rounded, more believable, more (forgive the phrase, especially since the example I've used is of an angel-become-devil) "human." And humanizing a villain in the long run both makes the story more interesting and the writer's job more clear. (See "believability" above).

Point the Third: The Villain Is "The Straw That Stirs The Drink" In Any Good Story.

Think about it. Who sets the tone in a great story? The Bad Guy. I'm not talking about those stories with antiheroes as the protagonist, like Breaking Bad. Nope, I'm talking about the real "Good vs. Evil" stuff. Moby Dick? Either Ahab or the whale (personifying Nature, in which Nature is seen as the embodiment of Hobbes' dictum that life is "nasty, brutish and short"), take your pick. These twin antagonists drive the action, as Ahab's quest helps both define and doom his crew. Take Pride and Prejudice. The charming, smooth-talking Wickham is the real villain of the piece, and as such it's his execution of his own agenda that throws the Bennett household into such turmoil. And doesn't Mr. Darcy come off so much the better when finally compared with the sly, deceitful Wickham?

And then there's The Lord of the Rings: Sauron's return to power sets off alarm bells among elves, dwarves and men, and our intrepid heroes set about marshaling their forces in response to him. In the Harry Potter novels Voldemort has the good guys so cowed that they fear even speaking his name, and this is even early on in the story, when they think Voldemort (Which is French for "Deathwish") is dead after his confrontation with Harry's mother in front of Harry's crib!

The role of the hero in any good story is, by nature, a reactive one. S/He rises to the occasion and saves the day. BUT there has to be an "occasion" to which to rise. Absent Grendel, no Beowulf. Without the Alien, no Ripley.

I've heard it said that our choice of heroes helps to define us. In the best stories, those who oppose/challenge our heroes help to define them. 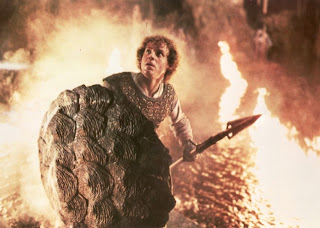 Posted by DoolinDalton at 01:38