The hysteria of the Red Scare in the 1950's is a sad chapter in recent American history. Joe McCarthy was a blowhard and an opportunist, who targeted the innocent along with the merely suspect, and destroyed the careers of honorable people, inside the government and out.

To take one example, it was an article of faith on the Left for many years that the Rosenbergs were railroaded to the electric chair. And likewise, that Alger Hiss was the victim of a smear campaign by the despicable turncoat Whittaker Chambers. The fact that the Hiss case gave legs to Richard Nixon's early political career is only proof positive that the bottom-feeders of the Far Right have no shame, and are happy to use the basest of lies to promote a culture of fear. 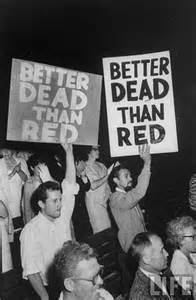 Slight cognitive dissonance, here. What gets lost in the shuffle is that Stalin had in fact mounted an enormous clandestine espionage operation inside the United States in the postwar years. Not that McCarthy made a dent in it.

Which brings us to THE HAUNTED WOOD.  In 1995, the FBI began to release the declassified transcripts of the Venona intercepts. Venona was a U.S. counterintelligence program that decrypted cable traffic, specifically Soviet agents reporting back to Moscow. The authors of THE HAUNTED WOOD were given access to KGB archives, and cross-collateralized with Venona, they reconstruct a secret world. 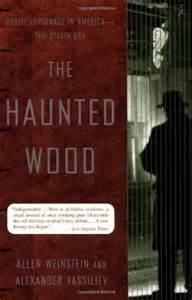 There's an obvious question of provenance. To what degree are the KGB documents---or the FBI documents, for that matter---redacted, or sanitized, or doctored? No security service wittingly gives up material that makes them look bad. The answer seems to be that when both versions of the traffic are available---e.g., the original Russian in Moscow's archive, and the FBI translations---the content matches, with only minor differences such as wording, small errors in vocabulary or grammar that would naturally creep in. A non-native Russian speaker (like this writer, for instance) is bound to make some mistakes. In other words, the resulting analysis is trustworthy. The authors haven't been led down the garden path.

THE HAUNTED WOOD makes a hash of the apologists' case. Alger Hiss, for one, was alomst certainly recruited by GRU, Soviet military intelligence, in the 1930's. And the Russians, of course, found other sympathizers among the anti-Fascist Left, particularly after the outbreak of the Spanish Civil War. You could ascribe this to idealism, or naivete, or a thirst for social justice. There were a lot of people on the Left, in the '30's, who saw the rise of Hitler as the handwriting on the wall, nor were they far wrong. It took a willing blindness, though, to see Stalin as a champion of the oppressed, and as time passed, many of these former willing acolytes fell away from the faith. After the arrest of the Rosenbergs, the Moscow intelligence apparat discarded well-intentioned Old Lefties and turned to pros. Rudolph Abel established a spy network out of Brooklyn that lasted nine years before the FBI rolled him up. Soviet illegals, working under deep cover, weren't a fabrication of J. Edgar Hoover's fevered reptile brain. 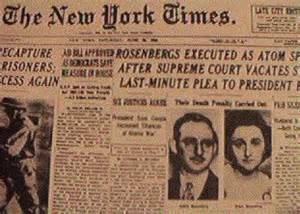 None of this is meant to be an alibi for malignant windbags like McCarthy, or the moral cowardice of his enablers. It's widely accepted that the Red-hunters never exposed a single agent of Communist influence. It was all smoke and mirrors. What they did do was create an abiding climate of mistrust, and enshrine the habit of betrayal. It's not a stretch to say that the hearings themselves, with their odor of Stalin's purge trials, the posturing, the parade of friendly witnesses, the public disgrace of others, and the blacklist, the fruit of a corrupt bargain, did more to damage the American political fabric than any number of actual enemy subversives could have hoped for. It poisoned the well for a generation.

The war in the shadows went on. A long stalemate, between two adversaries who each recognized a genuine threat in the other, and found, it seems, their mirror image. This is not in any way to suggest a moral equivalency, but there's a lesson to be taken from the Cold War. We were looking into the past, and trying to see the future through the wrong end of the telescope.

Wonderful piece, David. I've often thought it passing strange that many who so rightly opposed Hitler and the Nazis should find no contradiction in embracing Stalin and the Communists.

I am looking forward to reading "The Haunted Wood."

Or those who opposed Stalin and the Communists embracing Hitler and the Nazis with all their hearts? Various members of British nobility and royalty instantly leap to mind...

The trouble with the anti-Red movement in America was that Jammin' Joe and his ilk were after publicity. They wanted to hang famous people, in government, in the arts, etc., because that's where the money and fame were. The average real spy, unglamourously embedded in a bourgeois lifestyle, was much too difficult to discover and didn't generate nearly the headlines.

I get more great “what to read” tips from SleuthSayers, than from any other single source. And, this is one more example. Thanks, David.

I saw an interesting PBS special, broadcast in 2012 I believe, that dealt with a side issue of the Red Scare, and I found parts of it quite surprising. It was particularly interesting to see some labor leaders from that time say (when interviewed for this program) that they were indeed following “suggestions” sent to them from the Soviets. One even stated words to the effect: “They claimed we were working to subvert the U.S. government, and they were right. But, they never came down on me; instead they concentrated on bigger fish.” Which, would seem to back up Eve’s idea, above.

I've ordered The Haunted Wood, David. Thanks for the suggestion.

Mr. Gates: Your interpretation of what was happening in the 1950s is a real eye-opener. Thank God for straight-thinking journalists like Edward R. Murrow. Who exposed much of the nonsense. Also, I was much taken by one of the images from your post. The one of people holding up posters proclaiming "Better Dead Than Red." Without casting aspersions, while watching our last Presidential election results, I noticed a reference to Red states and Blue states. Kind of ironic. Hope I didn't overstep. Yours truly, Toe.