by R.T. Lawton
Doing one-car surveillance is similar to operating as a one-man team following a subject on foot, except that it is a little more difficult to hide a vehicle than it is for a single person to blend in with his surroundings. Once again, just like a person needs to fit in, your vehicle needs to match the area being surveilled. You don't park a flashy new Mercedes in the projects, nor do you park a Low-Rider in an upscale neighborhood, without attracting attention of some kind. You want no attention. However, in some areas you won't be able to park for very long anyway because that neighborhood is watching for those who don't belong there. In those cases, you need to brainstorm another way to do it, or else pick up on your subject in a different area he frequents.

In Kansas City whenever we set up on a mafia owned neighborhood, we could bet that in about fifteen minutes we could look in our rear view mirror and see a squad car sliding in behind us. Naturally, the cops would approach and ask for ID. At that point, we had two choices: we could leave the area or we could stay. But, if we stayed, then the mafia knew we were the law because we didn't get rousted. They simply used the law enforcement system against us by making a phone call to the local police about a suspicious car sitting in their neighborhood. So much for clandestine surveillance. 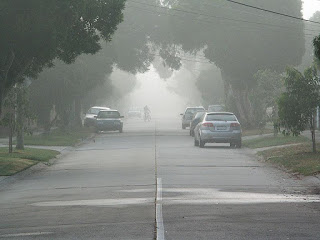 In other tight neighborhoods, little kids on bikes would ride up and knock on your window. "Whatcha doing, Mister?" Now it's time to go, you're burned, unless you have a believable story to tell. Sometimes if I was by myself, I would park the car in a favorable spot and slide over into the passenger seat as if my invisible buddy, the driver, had gotten out of the car and gone inside one of the nearby houses or buildings. This usually bought a little time to stay in place and worked especially well in winter when you left the engine running to stay warm. Otherwise, the windows soon fogged up, in which case any passerby knew someone was sitting in the vehicle anyway. Always problems and consequences to be dealt with.

It helps if you can turn off your headlights and parking lights when the engine is running, a problem with some newer models. You will also want to disable your interior lights so they don't come on every time you open the car door at night. Sure, you could crawl through the window like race car drivers, but that's an awkward enter and exit. Tends to draw attention if someone's looking your way.

So now, let's say you got past all them problems, the subject came out of the building, got into his car and drove away. If it's just you out there then you have to get on your subject before you lose him, but don't just roar up and hang onto his rear bumper. If you can, let one car get between you and the guy you're following. And yep, this becomes a problem situation every time you come to a red light. If he makes the light and the car in front of you stops, then you're stuck. Given enough room, you can steer to the right, wait until there's a break in cross traffic and run the light. You're taking a chance that he's not watching his back trail in the rear view mirror. So, you may have to decide which is more important, losing the subject or risking a burn.

Another danger of running a red light is your local friendly traffic cop who just happens to be in the area. If you have a badge to show him, he may send you on your way without a ticket, but your stop time has probably allowed the subject to travel out of sight.  To minimize this risk, I've been known to make a quick right turn at the red light, shoot a U on the cross street, then make another quick right at the intersection and get back in the game behind the subject.

Traffic lights also present a problem if there are no cars between you and the subject. You really don't want to be directly behind him all the time, so maybe take a right hand turn into a parking lot until the light changes. Be sure to use your blinker to signal that turn. If the subject is watching his rear view mirror, his perception is that you are not following him because you just made a turn. Of course, as soon as the light changes and he moves forward, you get out of the lot and back on the road. You're good for a while longer.

Corners are another problem. Do you follow him around the corner? If you can, delay your turn at that same corner he took. Let him get down the block a ways in case he is parking to enter a building, or even sitting just around the corner to see if the same car keeps following him on turns. If you have another person in your vehicle, have him get out, walk to the corner and advise you as to what the subject did after the turn.

More than likely, you will lose your target if the surveillance covers much distance. That's why it's better to use multiple cars on a moving surveillance. This way, when a subject makes a turn, The Eyeball keeps going straight and the #2 car follows around the corner and becomes the new Eyeball. The 3rd car in line also makes the corner. All other cars either go down parallel streets on either side or pull over and park, depending upon what the new Eyeball says the subject is doing.

With moving surveillance and multiple cars, communications are a definite requirement, which usually means a radio system. Law enforcement radios operate with several different channels. At least one channel hits the base radio and all other cars which happen to be on that channel at that time. The other channels are usually used for car-to-car only, to include concealed radios being used by that team's foot surveillance personnel. This way, several different teams can work different subjects at the same time without interferring with each other's transmissions. However, if two different subjects meet up with each other, then those two teams can switch to the same channel.

In later years, many law agencies went to radios with both clear channels and encrypted channels. Seems the bad guys could purchase equipment to listen in and find out if they were being targeted. All they needed was to find the correct radio frequency. The problem with an encrypted channel is that it cuts down on the range of communications. Get far enough out and you can't hit base, or even another car that got left behind in a fast moving surveillance. Therefore, what you're saying on the radio might be secure, but there may not be any friendlies out there who can hear you.

But, when you're a cop, that's the job and you get paid to do it. If you're a private eye or a civilian, you probably don't have much backup anyway. To paraphrase the roll call Sergeant on Hill Street Blues, "Be careful out there, people."
Posted by R.T. Lawton at 00:01