Invitation to a dinner party

Gyles Brandreth is an Englishman who writes mystery novels featuring real-life Victorians.  He recently pointed out this interesting group. Ponder if you will:

What do these six men have in common, besides being famous British authors?

They made up the roster at a single dinner party.  That's right, the creators of Dracula, Dorian Gray, Sherlock Holmes, Dr. Jeckyl, Peter Pan, and A.J. Raffles once sat down for a festive meal together.

The only one of these who may not be instantly familiar is Raffles, the creation of Doyle's brother-in-law Hornung.  Raffles was a "gentleman thief," an early example of a rogue hero, and deliberately intended as a sort of anti-Holmes.

Imagine for one horrible second how literature would have changed if, say, a boiler had blown up the restaurant that night.  My word, for one thing, cyberpunk might have died before being born. 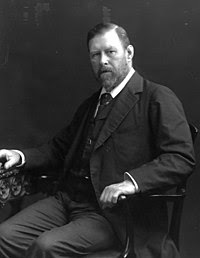 And don't you wish we had a recording of what these six gentlemen discussed that night?  And would anyone bet against me if I guessed it was taxes and the weather?

For more thoughts on that very subject, read the Mary Killen column in which Brandreth brought up the dinner party.  Bon appetit!